In the last few weeks a very special discovery has been made in the city of Vuelta de Obligado north of the province of Buenos Aires (Argentina). 220 body fragments of a not very well known extinct species were found. In addition to the paleontological value of the find, however, there is the fact that this animal witnessed the fire that took place on November 20, 1845.

The director of the Paleontological Museum of San Pedro, José Luis Aguilar, stated: “This finding was possible due to the very low river conditions in recent months, since the sediments in which these fossils were found are usually covered by a meter, similar to that on that Day the historical battle took place almost 175 years ago. “

Gustavo Torres, a resident of Vuelta de Obligado, was walking along the banks of the Paraná River and observed some remains at a very specific point that caught his attention. “It was strange to see some dark brown fragments at the edge of the water, in contrast to the yellowish-brown color of the sediments on the bank,” said Torres.

In this location, the Paraná River flooded within minutes, so Torres decided to save the remains and contacted the San Pedro Museum. “A total of about 220 plates were recovered from this armadillo’s armor, as well as part of its two femurs and its pelvis, so a fairly complete description can be made and more of this species can be learned from the Argentine Quaternary,” director Aguilar pointed out.

Researcher Luciano Brambilla from the Center for Interdisciplinary Studies at the University of Rosario (CEI-UNR) stated that “this specimen belongs to the species Eutatus pascuali; It was an armadillo that was very similar to the current wagon tattoo; it was about the same size and about three feet long; Its hands were very strong and had powerful claws, which is why it is considered a burrowing animal. “

This armadillo lived before the origins of nations and wars, but witnessed a historical event. “Today we know that the fossil remains of this animal were literally passed over in battle, a historic battle like the one that took place in Vuelta de Obligado on November 20, 1845,” noted Aguilar. 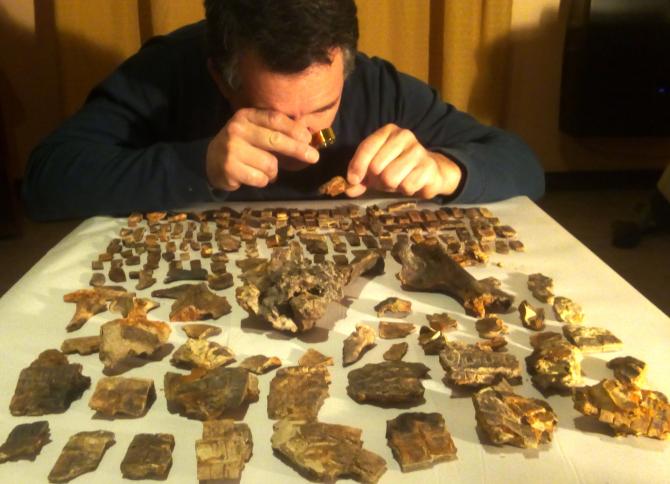 This animal was found in a sector that is usually covered by water. Almost 175 years ago, Anglo-French troops attempting to climb the Paraná River and go into battle with the army made the first attempt to disembark. commanded by General Lucio Mansilla (or “Mancilla” when he signed his letters).

“Eleven warships, six British and five French, attacked a force of about 2,300 men commanded by Mansilla, supported by four cannon batteries installed in the gorges of Vuelta de Obligado,” said the director of the Museum of San Pedro .

“At one point on this historic day, the Anglo-French fleet attempted to land some barges at an outpost and that attempt was blocked by the cavalry commanded by Mansilla,” explained Aguilar. And he added, “What we are now learning is that in this place below, covered by about a meter of water, while barges, spears, gunfire, cannon shots, men passed over us, there was this fossil that was hoped to be Discovered 700,000 years ago ”.

Director Aguilar pointed out that this find is very unusual as there is no record of a paleontological find in a location where a historical battle took place. “It will be a very important fossil for our museum, also because of the visits we receive from schools, because it has not only paleontological value but also historical value because it is a fossil that ‘survived’ a battle.”

The Eutatus pascuali lived 2.5 million years to 500,000 years before the present. There are records of around twenty specimens of this species in Argentina, most of them in the province of Buenos Aires and some in the south of the province of Santa Fe.

In general, the remains found are very fragmentary, although this “surviving” armadillo has been found to be fairly complete. In life it would have weighed around 50 kilograms and some of its properties can be seen in its fossil remains.

Researcher Luciano Brambilla explained that “armadillos are characterized by the fact that they have ribbons at the waist in the center of the shell that act as bellows and allow the rigid shell that protects them from predators to articulate.”

In this particular species, however, instead of three or nine ribbons, the entire front portion of the cuirass was articulated. “Two-thirds of the shell was articulated, so we assume it had a fairly posable shell, even though the back was a rigid shell like many other armadillos did,” Brambilla said.

This warrior armadillo also had another peculiarity. “Small perforations can be seen in the plates that make up the armor, showing the presence of large pili and large hairs that were housed in those plates. These perforations are much larger than those of any of the species known today, so the hair that came out of their shell must also be much larger, ”said the paleontologist from the University of Rosario.

It is hypothesized that this increase in hair could be some sort of adaptation to certain periods of lower temperatures during the existence of this species, but this is not accepted by all researchers.

It is estimated that this animal would have been herbivorous, similar to current armadillos. “It would have fed on leaves, stems and also some grasses, bulbs or roots,” said Brambilla, who added that other armadillos are omnivores or carnivores or could devote themselves to eating insects.

There is now evidence that these large furs were excellent excavators. “In some coastal areas of Buenos Aires and Santa Fe, there are records of some paleocaves, called crotovinas, where these large armadillos have taken refuge,” Brambilla said.

For his part, director Aguilar gave a possible explanation for the death of this armadillo, which many centuries later would witness a historical event: “700,000 years ago there were extensive pastures and plains in this area, although there were areas near the river Places that were flooded with mud, and sometimes these and other larger species were trapped in these soft sediments when they came to drink water or eat green grass. “(Source: CTyS-UNLaM / DICYT Agency)

Were there any food deliveries as early as the Bronze Age?