Who would have thought the catalog of AMD Ryzen processors that we currently find on the market is very largeand brings together a considerable number of models that are in very different generationsA reality that in many cases makes it difficult to decide which one best suits our needs or which is simply the best choice within a certain price range.

That is why I was encouraged to write this guide that we will find ourselves in Immerse yourself in the AMD Ryzen processor ecosystem we can currently find that. We will see the differences that the different generations have, the progress that AMD has made in the past three years, and we will create a set of criteria that will serve as a basis to help you make the right choice for your new one To meet AMD Ryzen processor.

Before I go into the subject, I want to make it clear that in this article we will mainly focus on AMD Ryzen processors, i. H. We will not include the APUs. Although I plan to prepare another guide of this type when AMD decides to launch its new generation of Zen 2 desktop APUs (currently they have only reached the portable sector).

As always, I'll remind you if you have any doubts You can leave it in the comments and we will be happy to help you with the solution. Now yes, make yourself comfortable that we start.

AMD Ryzen 1000 series marked the debut of Zen architectureand enabled the company that runs Lisa Su on the right foot to return to the high-performance PC processor market. The start wasn't perfect, in fact there were complicated moments that caused some to question the feasibility of the design MCM I had adopted AMD, but in the end everything went well and they were a real success.

AMD Ryzen processors use a multi-chip architecture (MCM) in which we find a clear minimum unit, the CCX block that groups four cores2 MB L2 cache (512 KB per core) and 8 MB L3 cache (2 MB per core). To create a processor like the Ryzen 7 1800X AMD, two CCX units were used, so that a total of eight cores, 4 MB L2 cache and 16 MB L3 cache were available.

With the integration of the SMT technology The AMD Ryzen 1000 series could process two execution threads for each physical core, i. H. a process and a thread That means the Ryzen 7 1800X had eight cores, but could process up to sixteen threads. The manufacturing process that AMD used with Zen was GlobalFoundries' 14nm process.

The leap in front of the bulldozer architecture was huge, and using an MCM design was a success because it enabled AMD Start processors with a high number of cores and good IPC Maintaining a very good efficiency and a very closed price. 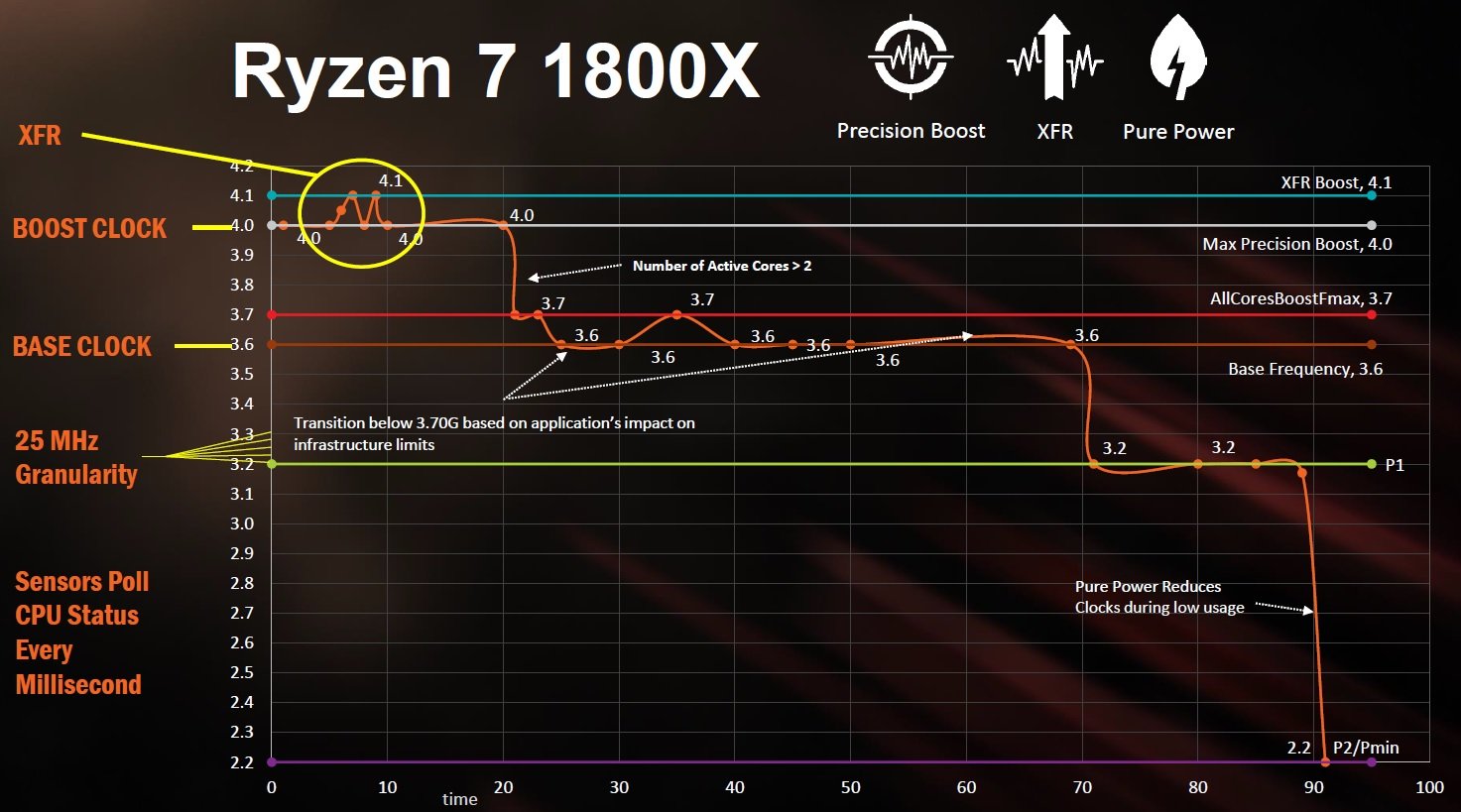 AMD tried to accelerate the frequencies of the Ryzen 1000 as much as possible.

Regarding the CPI The Ryzen 1000 series is slightly below the Intel Core 6000Due to the limitations of the MCM architecture, they achieve lower working frequencies (around 4 GHz with overclocking), but offer good performance and have a long lifespan in their most powerful configurations (Ryzen 5 1600 and higher). thanks to its good single-thread performance and high multithread capacity.

Due to the use of an MCM architecture, the performance varies depending on RAM memory configuration that we use. In order for them to develop their full potential, it is recommended to use memories that at least work. 2.666 MHz, although the ideal is to achieve that 2,933 MHz with CL15 latencies.

You should choose an AMD Ryzen 1000 if: especially if you find a very good offer, ie if the price compensates a lot compared to a superior model. Stock has dropped in recent weeks, and as a result, some models, such as the Ryzen 7 1800X, have gone up in price. It was available for a little over $ 100, an excellent price for a processor in its class, but now it's around $ 400 in some retailers.

You still have a lot of life ahead of you and You can do anythingBut the sudden rise in prices has made them practically meaningless. 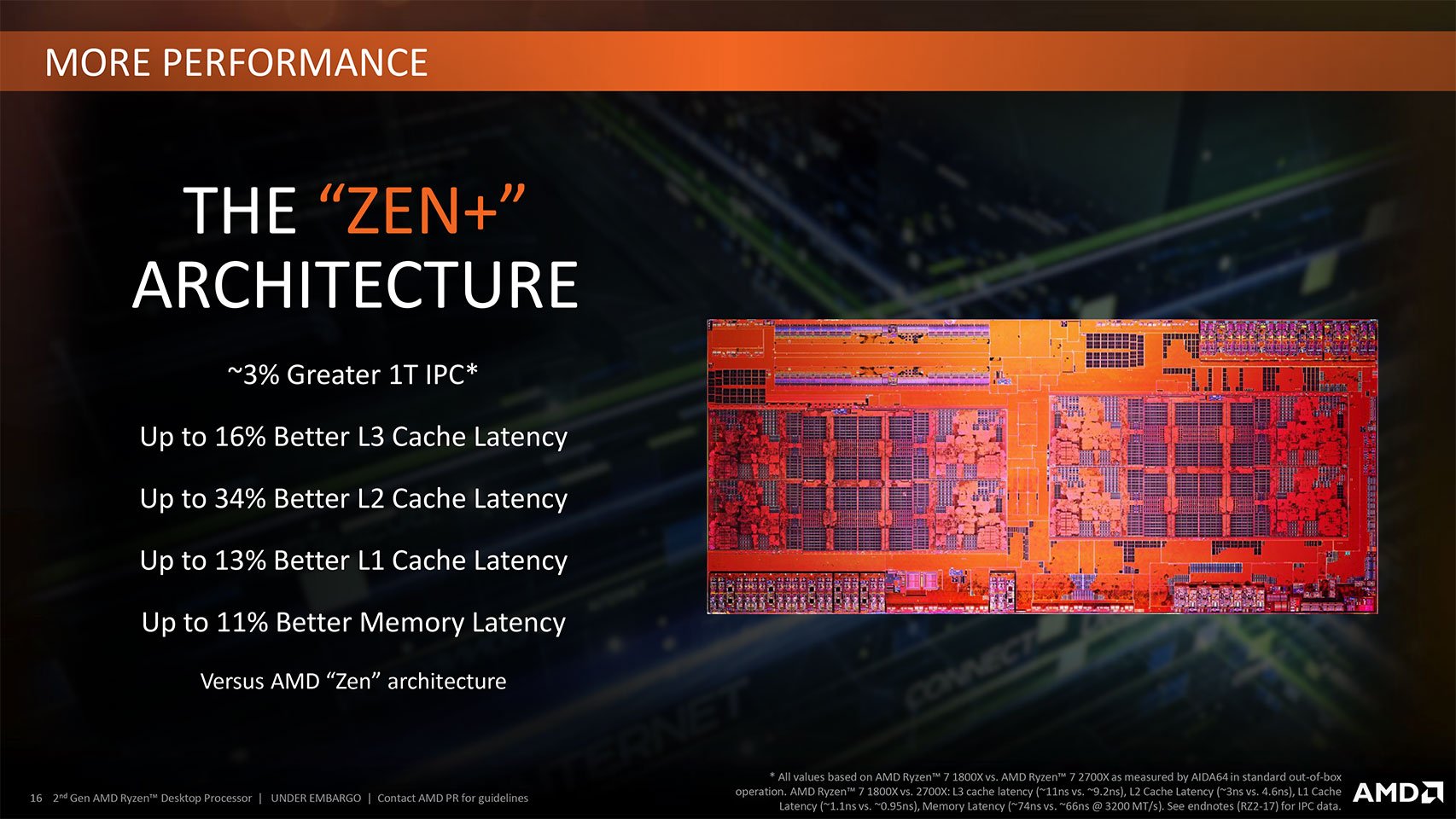 The most important improvements of Zen + (in addition to the process reduction by 12 nm).

The good experience that Sunnyvale has had with the Ryzen 1000 has prompted AMD to launch the Ryzen 2000. I remember when the information leak started there was talk of a major renovation, but in the end it was minor revision.

AMD Ryzen 2000 processors are based on Zen +, a version of Zen with small improvements, but from the first day it made it possible to offer much more careful support regarding the compatibility with high-performance memory and also a performance improvement without increasing the number of cores.

Zen + maintains the CCX unit as the basis for its MCM design as well as the previous generation infinity fabric communication system and cache distribution. The manufacturing process has been reduced to 12nmand the maximum working frequencies have been increased slightly. For example, the Ryzen 7 1800X reaches 3.9 GHz-4 GHz when all cores are active, while the Ryzen 7 reaches 2700X 4.1 GHz – 4.2 GHz, Values ​​that obviously depend on the silicon lottery.

This increase in working frequencies allowed a lower increase in gross throughput than the previous generation, while the reduction in cache latencies that AMD introduced in this new generation and improvements in the Infinity Fabric system resulted an increase in the CPI of between 3% and 4%. In terms of IPC, they're practically on par with Intel's Skylake.

The model layout and core configuration have not changed, and the dependency of this generation on the RAM frequency to achieve good performance has not changed. In this case, it is ideal to reach 3,200 MHz with CL14 or CL16 latencies. Please note that some of the models listed below, such as the Ryzen 3 2000, have only been released on the OEM channel. 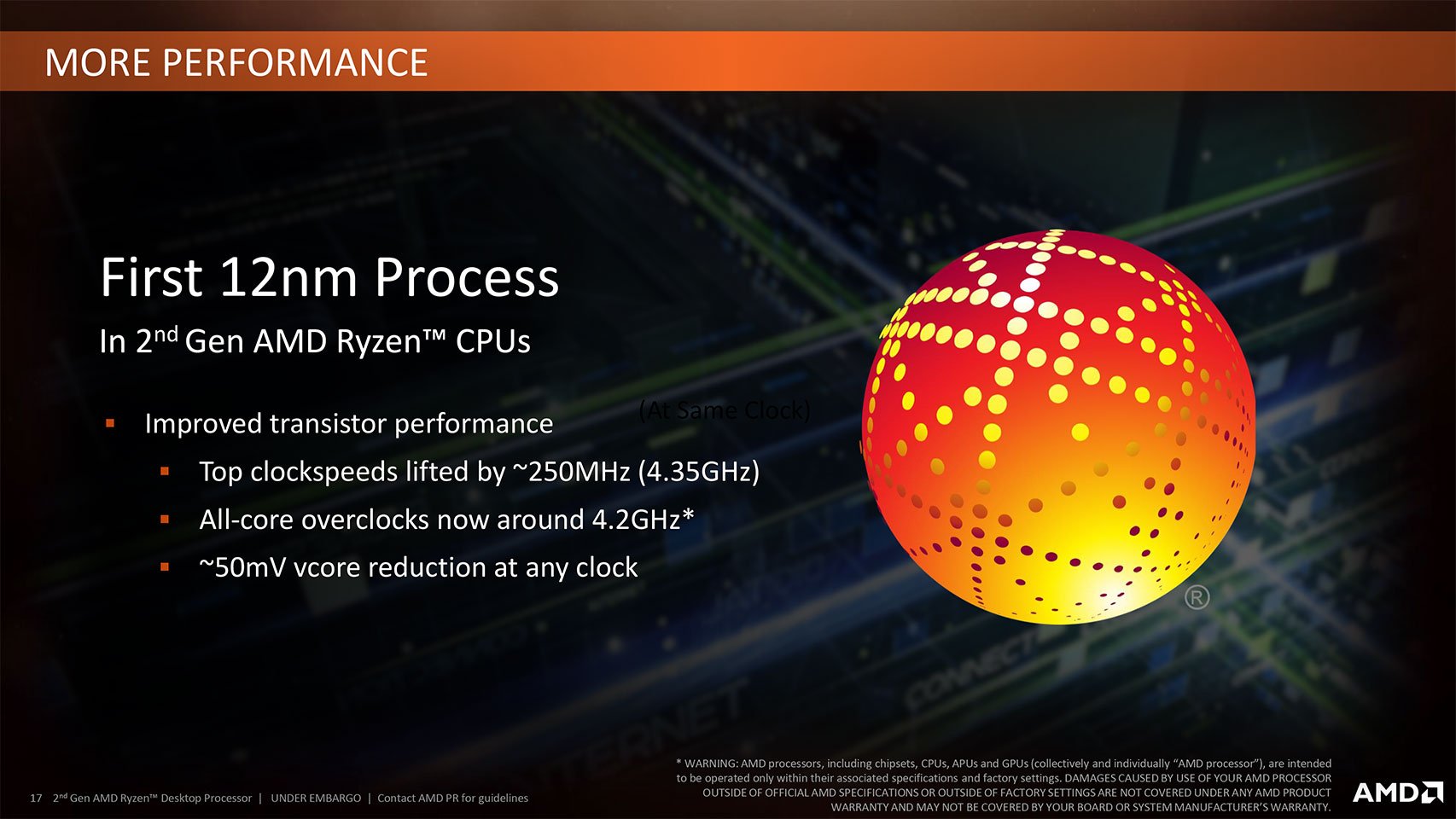 Again AMD tried to get the frequencies to the maximum, but not all chips could reach 4.3 GHz stably.

Processors Ryzen 1000 series with the distinctive AF They also use architecture Zen +, and therefore keep all their keys. I don't understand what made AMD launch this line of products as it creates confusion, but keep in mind.

You should choose an AMD Ryzen 2000 if: You're on a tight budget, but want to do well with every application, including next-generation games and professional applications that use intensive multithreading workloads. For example, a Ryzen 7 2700 is an excellent buy for less than $ 170 as it has eight cores and sixteen threads and is ready to face the transition to the new generation of consoles with ease.

Other models like that AMD Ryzen 5 1600 AF, The company uses the Zen + architecture despite the numbering and offers a very solid value as it adds six cores and twelve threads for 109.99 euros. 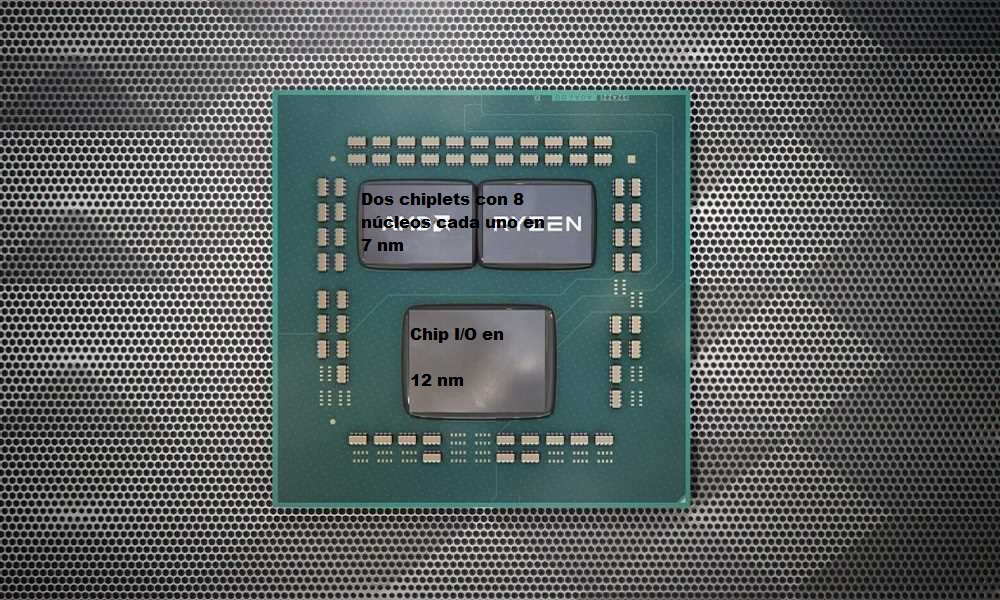 The basis of the new Zen 2 architecture.

The Zen 2 architecture was a real revolution for AMD. The company has retained a multi-chip module design, but this time The starting point was the chipiplets, small silicone tablets, manufactured in the process of 7 nm Group two CCX units for a total eight cores.

The AMD Ryzen 3000 processors use the Zen 2 architecture and are therefore manufactured in the 7 nm process, but this time an additional package that complements the chiplet and that was the key for AMD to simplify the design of its new generation CPUs. the I / O chip.

As already mentioned, in addition to the first, second and third level caches, each chiplet contains a total of eight cores, but no more. All input and output elements, including storage controllerwere outsourced to the I / O chip, which is manufactured in the 12 nm process and not in the 7 nm process like the chiplets.

AMD streamlined the process, simplified the chiplet design, introduced the I / O chip, improved the infinity fabric intercom system, reduced cache latencies, and doubled the amount of L3 cache per quad-core block (from 8) MB to 16 MB), improved support for high performance memory and managed to raise the maximum working frequencies to a more reasonable level (4.3 GHz – 4.4 GHz with all active cores on average).

The reduction of the manufacturing process to 7 nm and the jump to the chiplet also made AMD possible Double the maximum number of cores and threads in their Ryzen 3000 series processors, which gives us the following configurations: 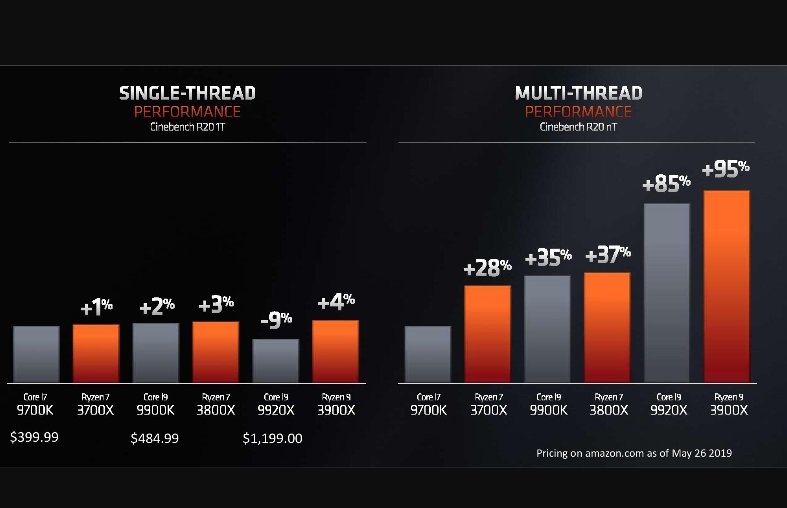 AMD has finally caught up with Intel at IPC.

In terms of IPC, AMD Ryzen 3000 processors at the level of the latest generation Intel CoreHowever, due to the known limitations of the MCM architecture, they reach lower frequencies, so that the performance in single-thread environments is lower, but the multithread potential is much higher, since Intel only publishes a 10-core and a 20-thread configuration has on the general consumer market.

You should choose an AMD Ryzen 3000 if: They have a significant budget and value gross performance per core. For games and applications that cannot scale well in more than four cores, we will notice the biggest difference thanks to the IPC and the working frequencies offered by the Ryzen 3000.

Among the most interesting models that we can currently find are the Ryzen 5 3600 and Ryzen 7 3700X. If you go to work in addition to playing, the Ryzen 9 3900X It is an excellent investment.

Oxford’s electric bell has the longest-lasting battery in history

Choosing a puppy is the most appropriate