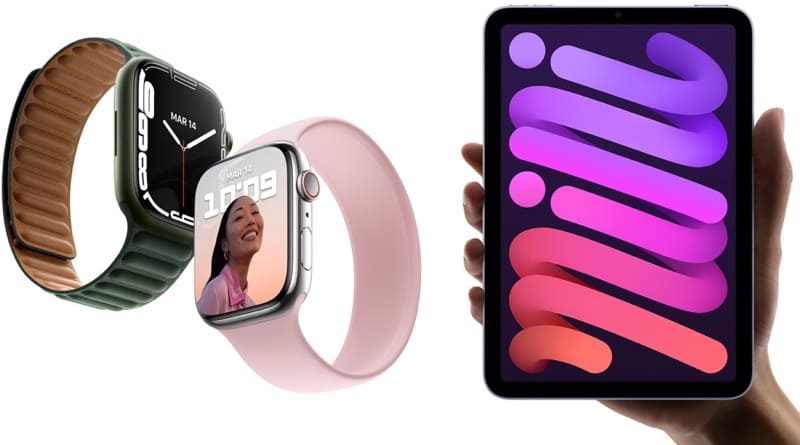 At the event to unveil the new iPhone 13 has also been time for Apple to present three new generations of its products: a new watch and two new tablets, one of them receiving a historic makeover.

-Apple Watch Series 7: It arrives with a subtle redesign to its display that allows it to take advantage of the curved edges and slightly increases the ratio of the screen size over the surface of the device. This allows for the screen to be 20% larger than that of the Series 6 with borders as small as 1.7 millimeters, which makes viewing text and messages more comfortable. This screen redesign is accompanied by new wallpapers and complications that take advantage of the increased surface area, a feature that countless Apple Watch-specific apps will also be able to take advantage of. The screen has IP6X protection against dust and scratches and the smartwatch can withstand immersion up to 50 meters. Finally, the battery recharges 33% faster and can be recharged to 80% in just 45 minutes. The dial (available in aluminium, titanium or stainless steel) is available in five new colours: blue, white, black, red and green. It will go on sale in autumn and although the official price in Spain has not yet been announced, Apple’s presentation announced prices starting at $399.

-New iPad: The main novelty is the presence of the a13 Bionic processorwhich, along with its new 12-megapixel, 122-degree front-facing camera, allows for the inclusion of a feature that debuted on the latest 12.9-inch iPad Pro, center Stage automatic framing which in video conferencing allows users to move in front of the iPad or share the stage with another speaker or speakers, and the front-facing camera reframes (horizontally and by zooming) and adjusts the shot so that the tablet does not need to be moved. The screen has True Tone adjustment and the device is compatible with the first-generation Apple Pencil. Available in gray and space gray colors and with capacities of 64 or 256 GB, will be available from September 24 with prices from 379 €. 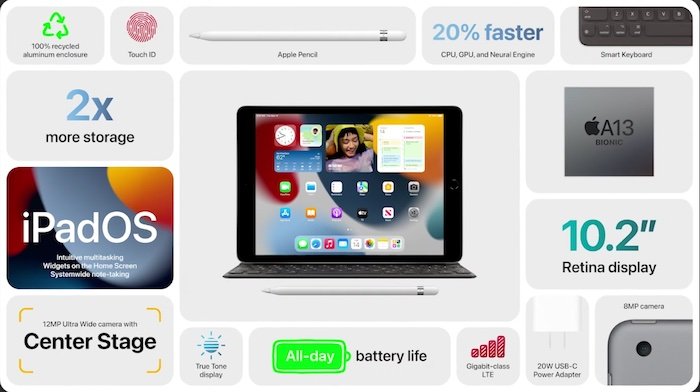 -iPad Mini: Apple’s smallest tablet has undergone its most revolutionary makeover yet. For starters, this is the first time it has changed its format, going from the usual rounded edges to flat edges with the same design as the current iPad Air and iPad Pro. This new design has also been transferred to the front, where for the first time the central button is dispensed with and the screen occupies as much space as possible, so that in the same physical space where previous generations offered 7.9 inches of screen there is now 8.3 inches of True Tone screen with a wide color gamut. With the front button gone, some of the functions of the front button have been moved, as has the biometric ID unlocking, to the TouchID button which, like its larger siblings, is located at the top right of the screen (in portrait format). Two other revolutions that the iPad Mini incorporates is the disappearance of the Lightning port in favor of a USB-C port and the ability to select 5G wireless connectivity. The rear camera is 12-megapixel, while the front camera, also 12 megapixel, is compatible with the aforementioned Center Stage. It is also compatible with Apple Pencil, but in this case with the second generation model, which includes the possibility of wireless magnetic charging. Available in star white, space gray, purple and pink, and with capacities of 64 Gb and 256 Gb, it will be available from September 24 at prices starting at 549 €. 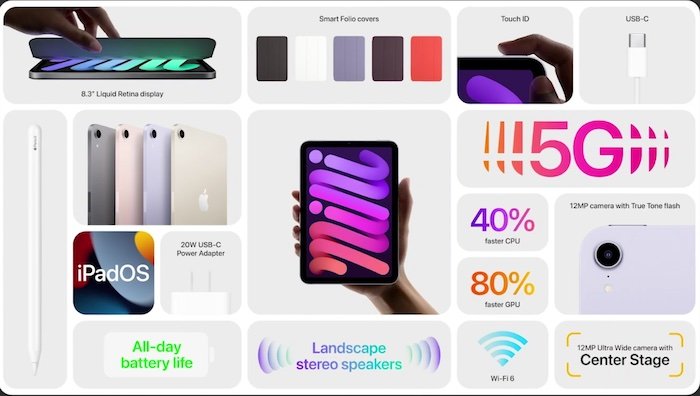