Some astronomers have applied artificial intelligence (AI) on some images that were taken with the Subaru telescope, and they have achieved very high precision in finding and classifying spiral galaxies in them. This technique, in combination with citizen science, is expected to produce further discoveries in the future.

The research group, consisting of astronomers, mainly from the National Astronomical Observatory of Japan (NAOJ), applied a technique from deep learning, a type of AI to classify galaxies into a large number of images taken with the Subaru telescope. Thanks to its high sensitivity, up to 560,000 galaxies were detected in the images. It would be extremely difficult to visually process this large number of galaxies individually with human eyes for morphological classification. The AI ​​enabled the team to do the processing without human interventionto.

Automated processing techniques for feature extraction and evaluation using deep learning algorithms have developed rapidly since 2012. They surpass humans for accuracy and are used for autonomous vehicles, security cameras and many other applications. Dr. Ken-ichi Tadaki, an assistant professor of projects at NAOJ, had the idea that if AI could classify images of cats and dogs, it should be able to distinguish “spiral galaxies” from “non-spiral galaxies”. “Using human-prepared training data, the AI ​​successfully classified the morphologies of galaxies to an accuracy of 97.5%. Then he applied the trained AI to the entire data set and identified spirals in approximately 80,000 galaxies. 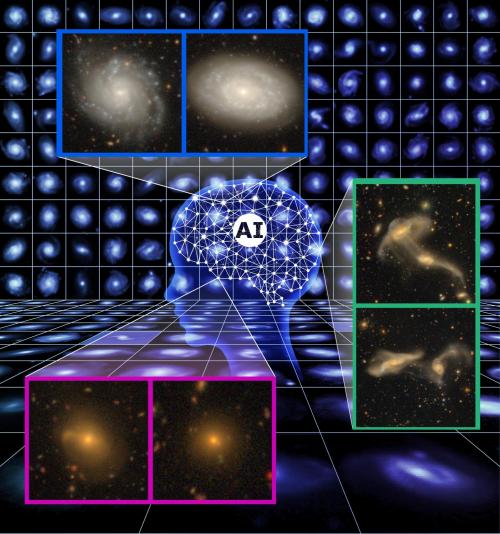 Conceptual illustration of how artificial intelligence classifies different types of galaxies based on their morphology. (Photo: NAOJ / HSC-SSP)

Once this technique is proven effective, it can be expanded to classify galaxies into more detailed classes and train the AI ​​on the basis of a significant number of human classified galaxies. The NAOJ is now running a citizen science project called “GALAXY CRUISE,” in which citizens examine images of galaxies taken with the Subaru telescope to look for features that suggest that one galaxy is colliding with or another galaxy merges. Associate Professor Masayuki Tanaka has high hopes for the study of galaxies with artificial intelligence: “Subaru’s strategic program contains an almost innumerable number of galaxies. Scientifically, it is very interesting to tackle this big data in collaboration with civil astronomers and machines. If we using deep learning in addition to classifications by citizen scientists in GALAXY CRUISE, large numbers of galaxies are likely to collide and merge. “(Source: NCYT amazement)

Electric eels hunt in a herd