“We propose a new way of understanding the origin and nature of galactic centers,” describes CONICET researcher (Argentina) Carlos Argüelles, referring to the result of his latest work, which has just been presented to the international scientific community and in which In collaboration with Italian colleagues from the ICRANet network (International Center for Relativistic Astrophysics), it has been possible to explain the behavior of two objects near the core of our galaxy, the Milky Way, regardless of the current idea: the existence of a black hole, ie a space-time region with a high mass concentration in the galactic center. The conclusions announced today at international level will be published on September 9 in the journal Astronomy & Astrophysics.

Dark matter is the main constituent of the universe – an estimated 85 percent of it – and its name is precisely because it does not generate electromagnetic radiation, that is, it does not emit visible light and therefore cannot be observed directly and it is only possible to predict its presence conclude by interpreting the effect it has on the gravity of the galaxies and the various celestial bodies that are seen.

Since his PhD in Italy in 2015, Argüelles has been working intensively with the same group of colleagues to interpret how it is distributed in our galaxy in particular and in the universe in general, and as a major challenge to find out which particle that was in the first Moments after the first explosive event, the Big Bang, dark matter was created. In a previous study, they proposed an alternative mathematical model to the current paradigm – Ruffini-Argüelles-Rueda (RAR) – that combined concepts from quantum physics, general relativity, and thermodynamics, and obtained encouraging results that earned them international recognition .

This time, the experts used the RAR scheme to study the behavior of two objects near the center of the Milky Way, where a black hole believed to exist with a mass 4 million times that of the Sun, known as Sagittarius A * because it is located in the constellation Sagittarius. They used data on the orbit, position and speed of both bodies recorded by major international telescopes. In particular, they studied a bright young star called S2, which is second closest to the center, and another object that is not known with certainty whether it is a star or a gas cloud – based on various indicators of its composition, to which they are lean the first option – called G2. 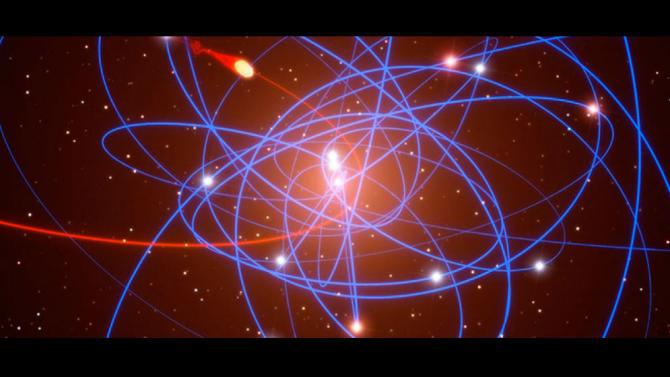 Orbits of young stars moving at a relativistic speed – up to 7 percent the speed of light – around Sagittarius A *. (Photo: Courtesy Investigator)

“S2 has been monitored for a little over two decades and there is a lot of information about it. The entire orbit was 16 years old, meaning more than one complete revolution has been explored. “In the case of G2, this has been observed for about five years, but the paradigm that assumes the existence of a central black hole cannot exactly explain its dynamics,” says Argüelles, who works at the Faculty of Science. Astronomical and geophysical from the National University of La Plata (FCAG, UNLP).

The researchers converted the known variables for each object to RAR, using the same mathematical parameters used by other colleagues in previous work. First, the presence of a black hole was taken into account and then this alternative was dispensed with: “With our model, we were able to explain the behavior of the two objects better and more precisely, without having to install the black hole. The orbits of both bodies are due to the existence of a dense core of dark matter of fermionic origin, that is, a very compact collection of fermions – on the order of millions of solar masses – which according to the model have a mass nine times lighter. than electrons, but they are neutral. A key point that emerges from our work is that this dense fermionic core is surrounded by a dilute atmosphere that extends to the outside of the galaxy and also explains the curve of rotation, i.e. the speed of translation of the outermost stars with respect to from the center, ”explains the expert.

Argüelles makes it clear that these results do not indicate that there are no black holes: “On the contrary, a few years ago a group of colleagues succeeded in taking the first image of a supermassive one with one billion solar masses. Our model suggests that these regions of fermionic origin collapse when they reach masses greater than 100 million solar masses and are the seeds for the formation of supermassive black holes. In other words, we are also delivering light in this sense, as this is not known with certainty today. “

One of the questions astrophysicists reveal is how to solve the particle that formed dark matter. “None of the ones that make up the Standard Model are used for explanation. There are two main aspects: one suggests that it is of a bosonic origin, and the other speaks of a fermionic origin, ie a particle from the group of bosons or fermions. The candidate with which we measure this behavior of stars near the galactic center is a neutral fermion. The mass of the particle that our model provides for this candidate also serves to explain the distribution of dark matter throughout the universe, ”he concludes. (Source: CONICET / DICYT)

The probe lost 18 years ago