E3 2021. After the large number of events that were suspended last year, we have made great efforts to regain a large part of our free time with the reopening of some mass events such as stadiums. However, with a global health problem still lingering, the Entertainment Software Association, the association responsible for the E3 video game fair, announced last February the complete transmission of this year’s celebration in digital format.

Although this will greatly reduce some of the experience for both users and fans, The expectations for this E3 2021 are still quite high, with the already confirmed return of some of the big developers and a long weekend awaiting announcements of already advanced games, unreleased titles and even some major surprises for the video game market.

Keeping the original dates suggested for the in-person event, this year E3 2021 It starts next Saturday, June 12th, at 7:00 p.m. from the Spanish peninsula and extends its program by four days until the early hours of Wednesday, June 16, with an award ceremony and a closing ceremony starting at 1:45 a.m. (time on the Spanish peninsula).

However, there are some developers who have already geared their stand-alone presentations to the fair itself, Start today.

As we mentioned earlier This year the fair is limited to a purely online format, with the announcement of the cancellation of the usual place in Los Angeles.

However, this allows greater freedom for the use of resources for the implementation of the presentations as well as for the follow-up by the fans. The fact is that this fair already has extensive experience in the digitization of its content and has had the most comprehensive access and the most extensive range for years. 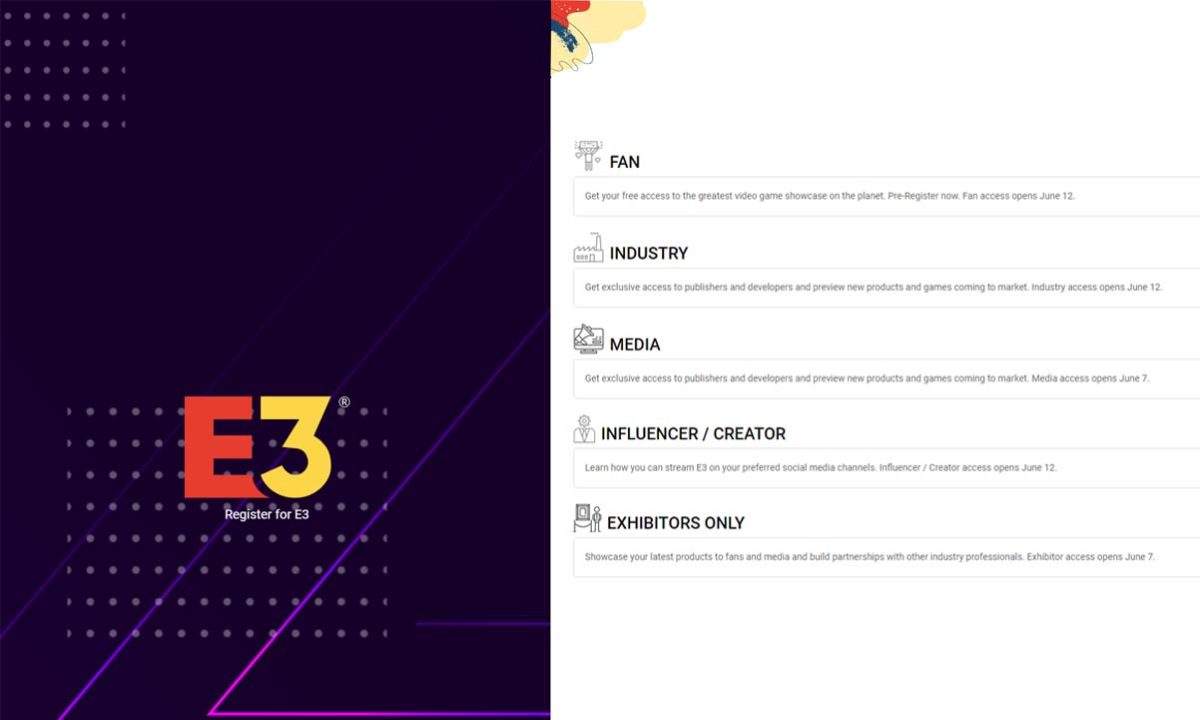 Without the movements of personal celebrations, attending E3 2021 this year will be easier than ever. We just need to access the official website of the event and pre-register for free access to the video shared live by the organization on the same day, June 12th, in which the various conferences and interviews of all participants are collected.

Although we are only interested in the part of the game announcements, we can also follow the fair follow through official channels and social networks From the same:

As in previous years, we will again see a slight segmentation this year between those who prefer to hold their own conferences in the days leading up to the fair and those who will take part. Hence it is highlighted among the first confirmations the ever-recurring absence from Sonywho might ignore his presence after the recent celebration of the final State of Play in Horizon Forbidden West.

Electronic Arts will also be missingthat although it has already confirmed its EA Play event, it has apparently decided to postpone it until next July in order to completely separate itself from the framework of the fair. However, this delay is justified by the indirect presence of their games with the already confirmed announcement of the new Battlefield as well as some advances in the Microsoft or Nintendo conferences.

Part of studying at EA, other of the big absences will be that of BioWarewhich awaits news of the new Dragon Age and the next installment in the Mass Effect saga; Yes Codemaster, already ready to release some annual sports titles like F1 2021 this coming July.

Though that doesn’t mean we still have the involvement of others such as Nintendo, Microsoft, Square Enix, Capcom, Bandai Namco, Warner Bros., Devolver Digital, Koch Media or Gearbox, among others; plus Ubisoft’s surprising comeback, which will host its Ubisoft Forward within the exhibition times instead of the previous stand-alone event.

Finally we will have the designated spaces again de la PC Gaming Show, devoted exclusively to computer titles; as well as the presentations of some software and hardware companies such as Verizon, Intellivision, VENN or Razer. Is so noticeable the lack of a conference devoted exclusively to virtual reality gamesalthough, given Valve’s confirmed presence on the PC Gaming Show, a possible announcement related to Valve Index cannot be ruled out.

In the following we describe the Details and previews shared for some of them: 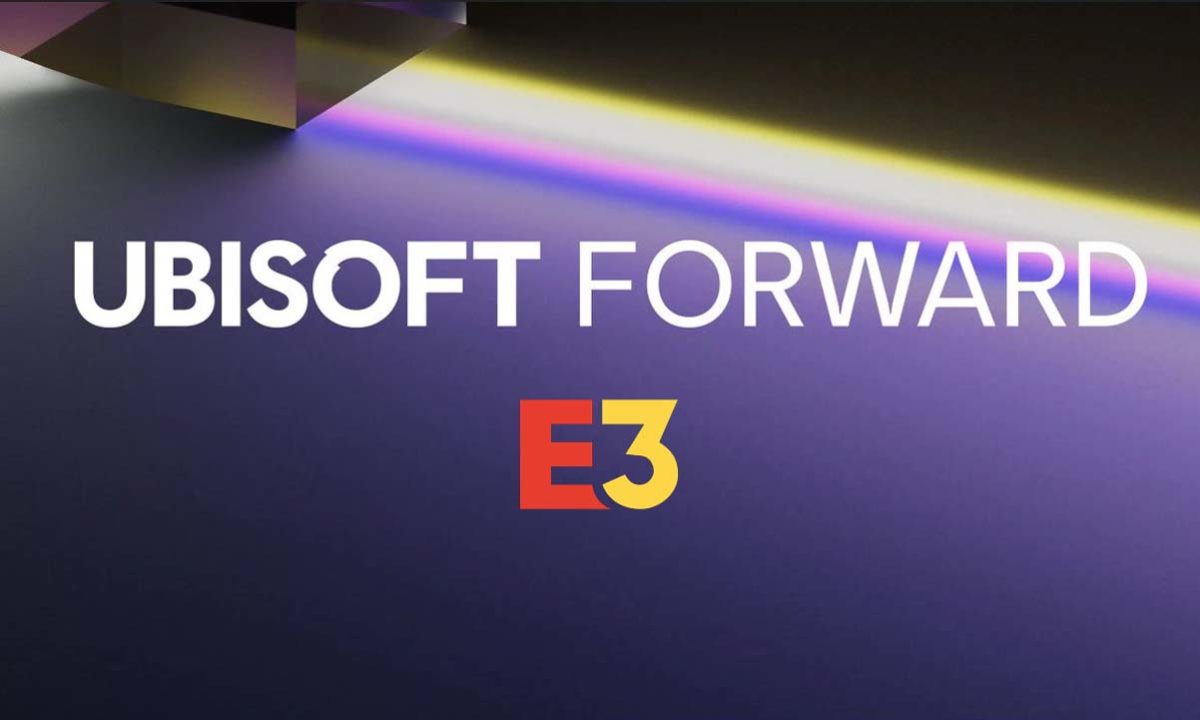 With few details but quite a few titles, this Ubisoft Forward will take a full tour of the company’s upcoming releases, with particular focus on the recently advanced ones. Rainbow Six quarantine, Far Cry 6, y Riders Republic, in addition to the audio-visual works Mythic Quest and Werewolves Within, new additional content for Assassin’s Creed Valhalla and Rainbow Six Siege will be added.

Ubisoft conference takes place on the 12th at 9:00 p.m. (Spanish Peninsula Time) and we can follow it from any of the company’s official channels: 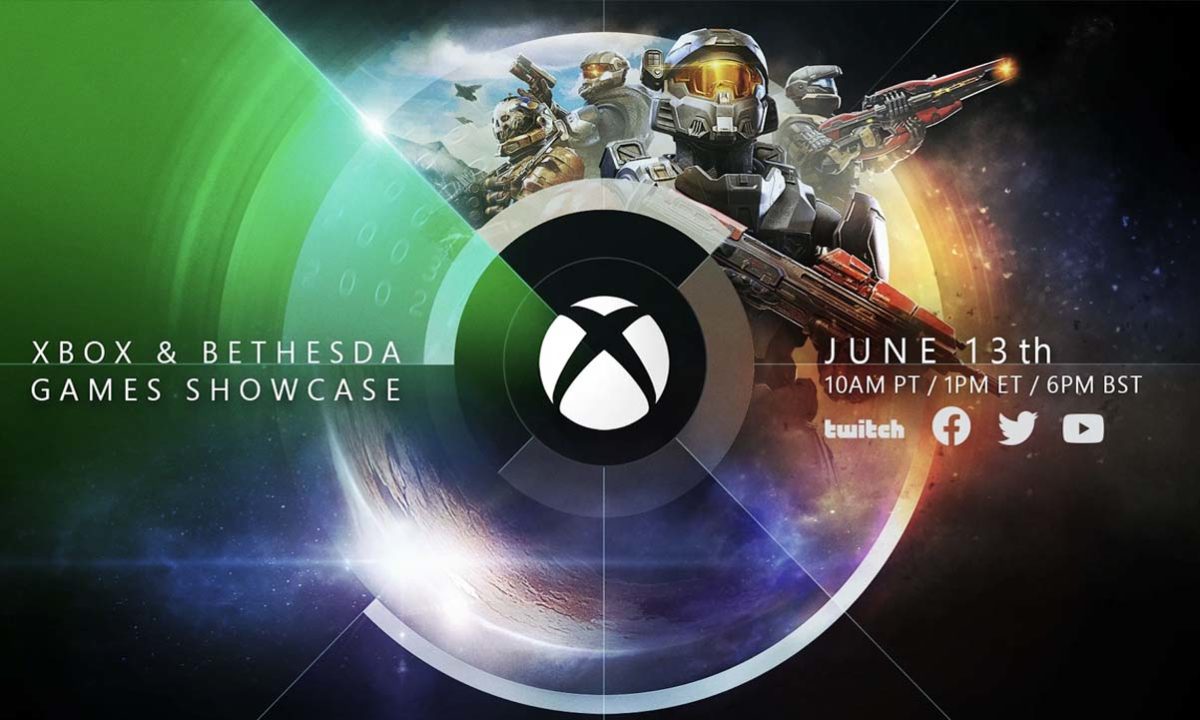 In the case of Microsoft, the topics of its presentation seem pretty clear, the company itself has shared a teaser image in which we can clearly see the presence of Halo Infinite, as well as the slightly hidden reference to the original teaser by Star field, so it seems almost certain that these will be two of its main titles.

However, new details are expected from other advanced titles such as: B. the new edition of Fable, Forza Horizon 5, Perfect Dark, State of Decay 3 or Hellblade 2.

The Xbox and Bethesda conference is taking place on the 13th at 7:00 p.m. (Spanish Peninsula Time) and we can follow it from any of the company’s official channels: 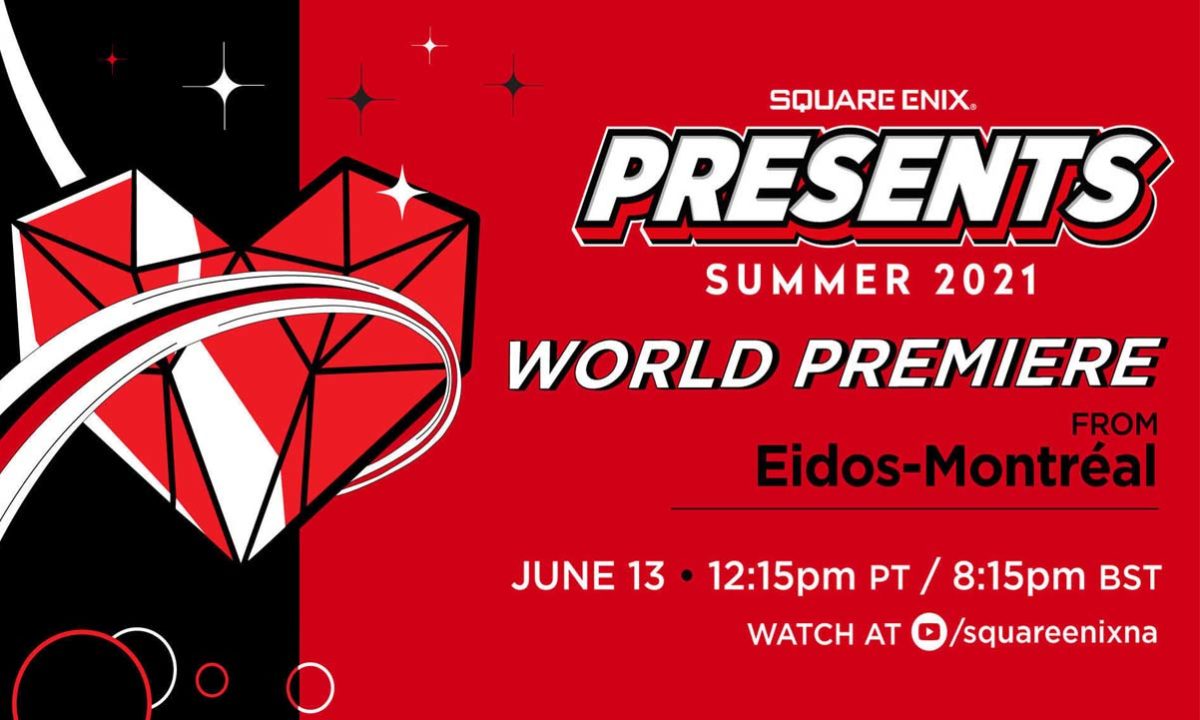 Square Enix has promised to present a new game developed by Eidos Montreal, the studio behind Shadow of the Tomb Raider and Deus Ex: Mankind Divided. However, everything indicates that it could be the rumored Guardians of the Galaxy game, especially after this study helped develop Marvel’s Avengers.

In addition, after a year of waiting and the only addition to some content on the game’s official website, Without a doubt, all eyes are on Final Fantasy XVI, for which we could not only see new pictures, but even a first release date. And despite the difficult situation, the team of Creative Business Unit III has already announced that the title is quite advanced and will arrive «earlier than we could expect«.

Square Enix conference takes place on the 13th at 9:15 pm (Spanish Peninsula Time) and we can follow it from any of the company’s official channels:

The event lasts about 90 minutes and is again moderated by Sean “Day9” Plott, a person who has been associated with computer games throughout his career as a broadcaster, commentator and professional gamer. According to PC Gamer himself, the program “as many cool teasers as possible, 39 new videos, game announcements and interviews in total“.

On the other hand, if Gabe Newel’s recent remarks had already managed to revolutionize fans, the fact that the developer was preparing an important “Display via Steam« You ended all alarms during this conference. And despite the great secrecy this company has gotten us used to, all indications are that new details are emerging about SteamPal, the portable console project that leaked a few weeks ago.

The PC Gaming Show conferences begin on the 13th at 11:30 pm (Spanish Peninsula Time) and we can follow it from any of the company’s official channels:

Visit us at the Capcom Showcase at # E32021 for news on our latest game lineup including:

In this case, even more concrete than Microsoft’s advance, we find a small list of the main titles of this conference, which lists the appearance of at least these four games: The Great Ace Attorney Chronicles, Monster Hunter Stores 2: Wings of Ruin, Monster Hunter Rise, and Resident Evil Villagevilwhich combines the introduction of new titles with the possibility of adding additional content to the rest of the games already released.

The Capcom conference takes place on the 14th at 11:30 pm (Spanish Peninsula Time) and we can follow it from any of the company’s official channels: 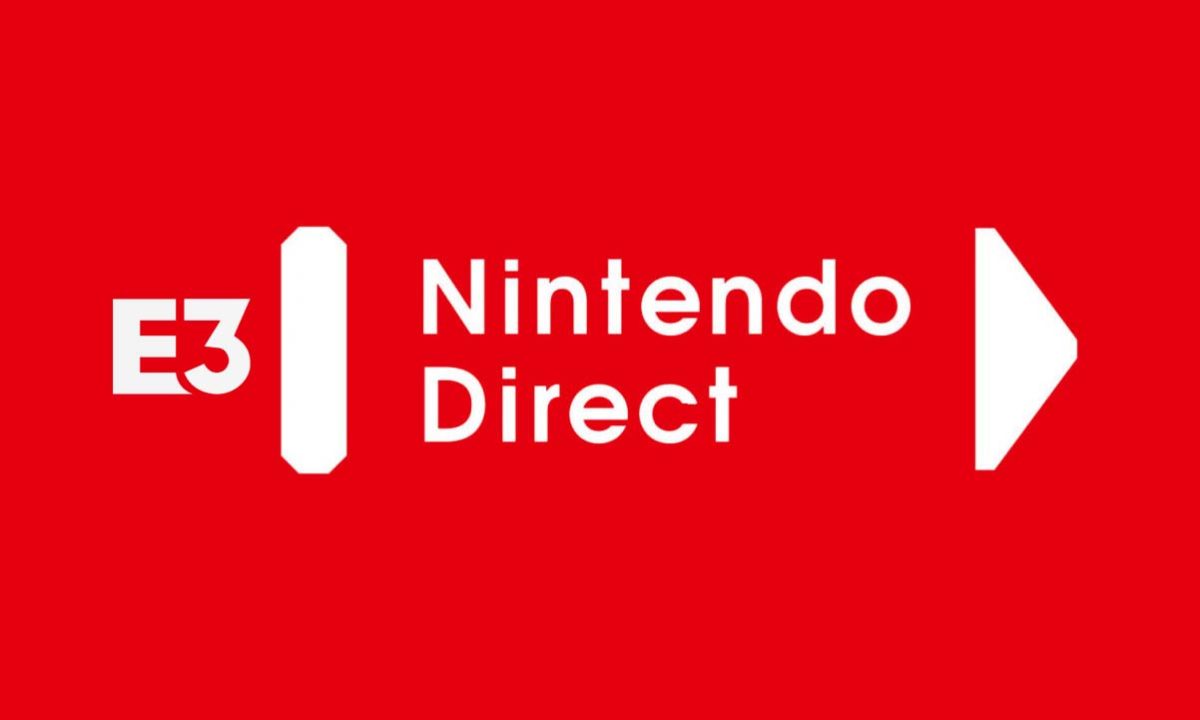 While Nintendo hasn’t released any official information at the moment, the rumors for its presentation seem pretty clear. And the safest thing is that a good part of the appointment is dedicated Promotion of the latest games that are already announced and dated for the upcoming release with Mario Golf: Super Rush for June, The Legend of Zelda: Skyward Sword HD for July, and No More Heroes 3 for August.

Although it cannot be ruled out that they will use the trade fair with the label “Nintendo Direct” to present some of the of New additions to the Super Smash Bros. Ultimate roster, as the last two fighters from his Fighter Pass Vol. 2 have not yet been announced.

On the other hand, it is also common for the Japanese company to use this fair to announce a surprise game, with three great titles in the sights of the fans: Bayonetta 3, Metroid Prime 4 and the sequel The Legend of Zelda: Breath of the Wild 2. And indeed, this year is celebrated the 35th anniversary of the Metroid and The Legend of Zelda sagas, so that a possible compilation or remastering of his classic games is not ruled out.

The Nintendo conference takes place on the 15th at 6:00 pm (Spanish Peninsula Time) and we can follow it from any of the company’s official channels:

This is Bit2Me, the exchange of Spanish origin for all target groups

Alice in Wonderland is based on a real girl

be the protagonists again