During the presentation event, we had the opportunity to confirm that expectations had been awakened due to numerous rumors and alleged leaks they weren’t exaggerated at all, and that the price / performance ratio of the GeForce RTX 30 would be much higher compared to what the GeForce RTX 20 series offered at the time.

The generation jump of the GeForce RTX 30 is very large and is not only defined by the increase in raw performance achieved by NVIDIA, but also also for the improvements it made in terms of both ray tracing and artificial intelligence, and for the new technologies He presented this, with which he promised to mark a turning point and improve our gaming experience.

There are many important things behind the GeForce RTX 30 that need to be clear to really understand how they differ, what value they offer, and how much they represent a leap forward compared to the GeForce RTX 20. That’s why we wanted to write this special article where you can find a summary the ten most important keys that defines the new NVIDIA GeForce RTX 30 graphics cards. 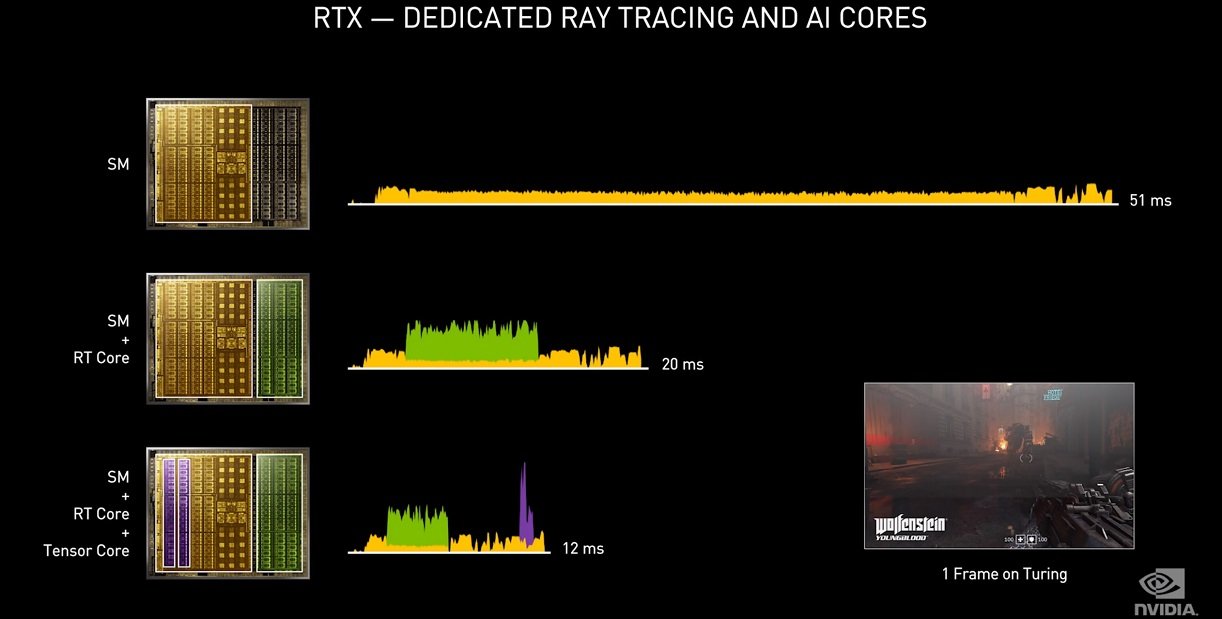 I know what you think, how did NVIDIA double the number of shaders? Well, very easy, with a change in SM blocks (Streaming Multiprocessors), the equivalent of AMD CUs (Computing Units). So far, every SM had 64 shaders, but with Ampere NVIDIA made the leap to a configuration of 128 shaders. This means that the same number of SM units as well as the number of texturing and rasterizing units are kept, but the number of shaders is doubled. The number of RT cores and tensor cores does not increase either.

If this change surprised you, don’t worry, we weren’t expecting it, although it’s not the first time NVIDIA has played with the shaders built into every SM. Kepler, architecture of the GTX 600 and GTX 700, 192 shaders for each SM unit have been added. Maxwell, the architecture used in the GTX 750-750 Ti and GTX 900, lowered the number to 128 shaders, a number that remained with Pascal and which Turing reduced to 64 shaders per SM.

2. The series GeForce RTX 30 has made a huge generation leap 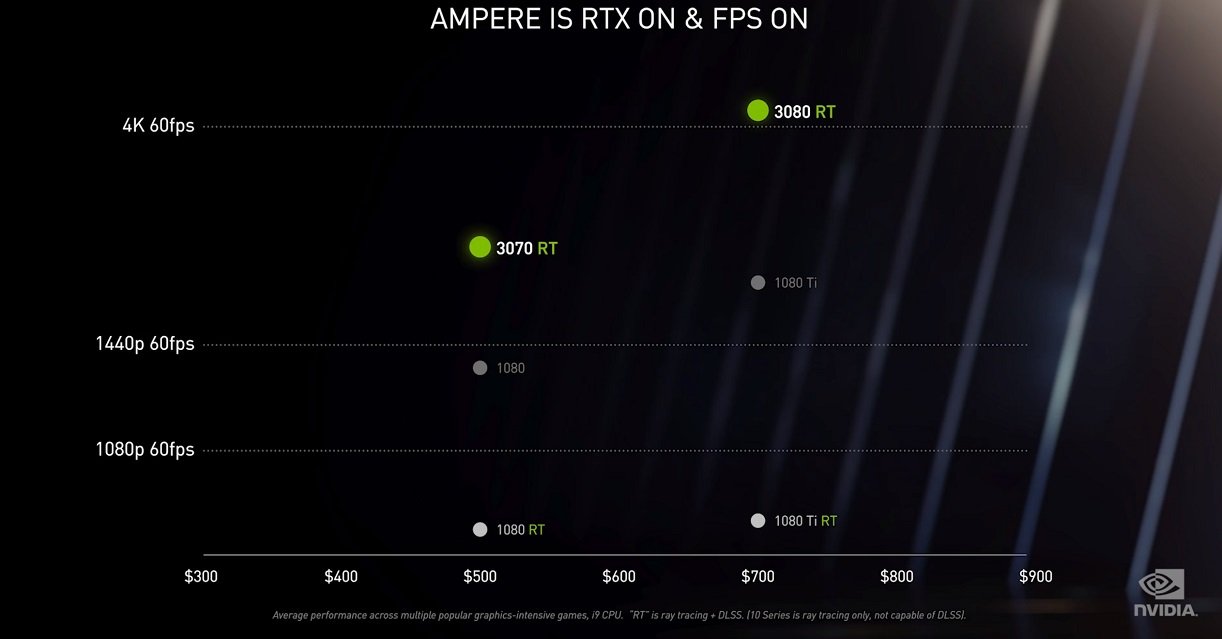 When NVIDIA launched the GTX 600 series, there was a very important development. Hot shaders have been abandonedand the company multiplied the number of shaders by three to compensate for the decrease in their frequency of work. The result was impressive, the GTX 580 had 512 shaders and the GTX 680 reached 1,536 shaders.

The RTX 20 series They did not offer good value from an evolutionary point of view if we limited ourselves to gross power. NVIDIA knew this and wanted to attract user attention with hardware accelerated ray tracing and DLSS. In the end, I have to say that this latest technology has been the most interesting thing Turing has left us, and I hope it continues to be properly used in more and more games.

With the GeForce RTX 30 there was A jump similar to the one we saw when transitioning from the GTX 900 to the GTX 10, how: 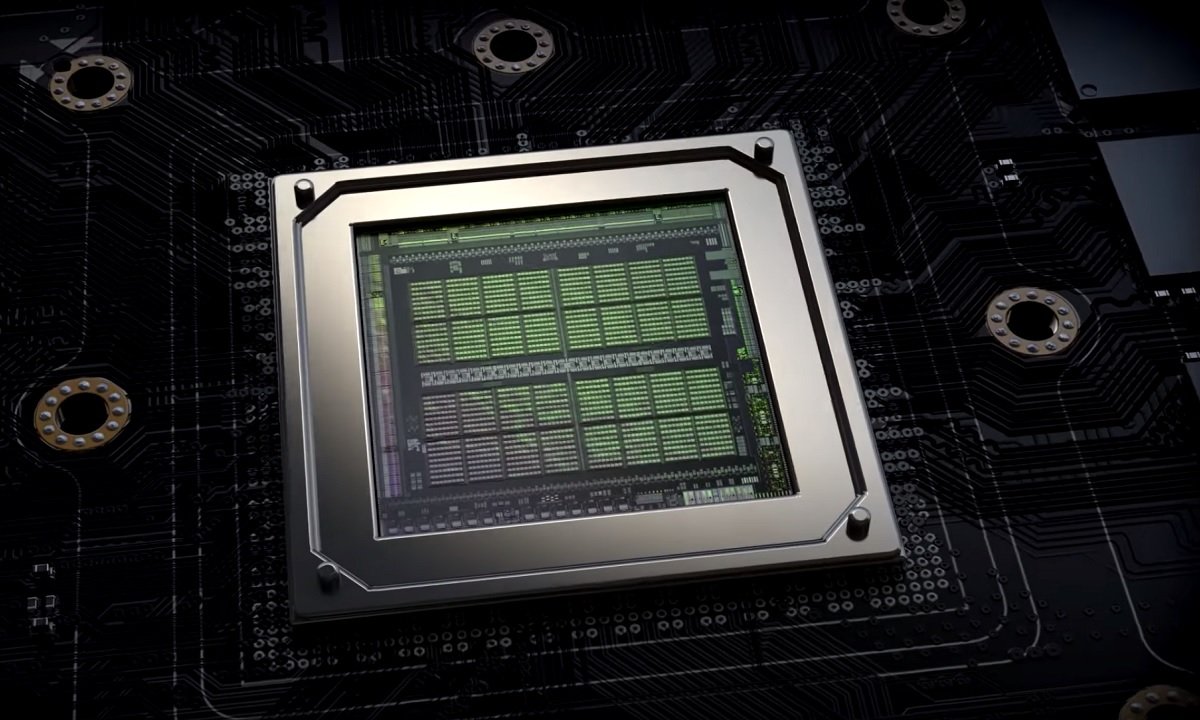 In addition to increasing the speed of the memory and data bus, NVIDIA decided to add a larger amount of graphics memory to the RTX 3090 and RTX 3080 24 GB GDDR6X, A number that was previously reserved for the TITAN series and represents a significant leap over the 11 GB of the RTX 2080 Ti.

4.-New cooling system so that temperatures are not a problem

The NVIDIA Ampere architecture made it possible to create more powerful GPUs, but also more “swallower” and more “cool”. Just look at the TDP of the RTX 3090 and compare it to that of the RTX 2080 Ti to realize it: 350 watts versus 250 watts. The same applies to the RTX 3080 with a TDP of 320 watts.

To prevent heat from becoming a problem, NVIDIA completely redesigned the circuit board on the Founders Edition models using a cooling system that originated from an irregular circuit board and mount a huge cooler with two fans on opposite sides. This improves the intake of cold air and the output of hot air as we can see in the picture.

According to NVIDIA, this cooling system has allowed Reduce working temperatures by up to 20 degrees, always compared to the values ​​obtained with the cooling systems of the RTX 20 Founders Edition.

It will be interesting to see how the RTX 3090 and RTX 3080 relate to each manufacturer’s custom designs, but it’s clear that they should take maximum care of them to avoid temperature problems with both models. The RTX 3080 is a different story as it has a lower TDP and is perfectly defended with a more modest cooling system. 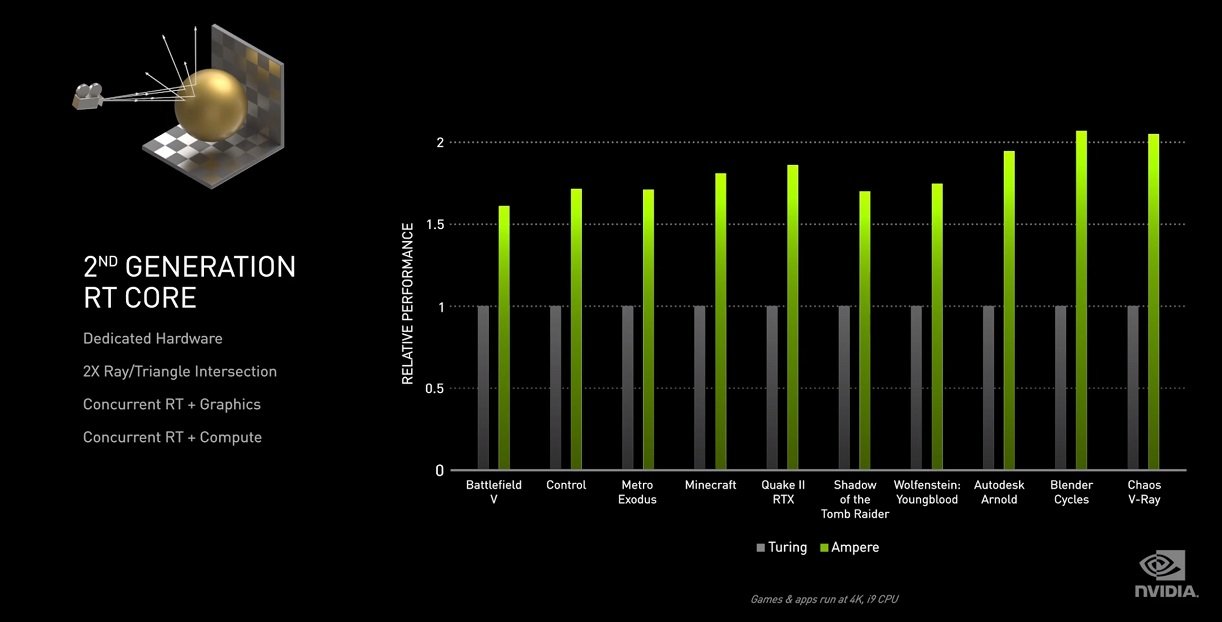 We said earlier that the GeForce RTX 30 doesn’t double the number of RT cores. However, this does not mean that no improvements have been made, on the contrary, as NVIDIA has made it clear that this is a new architecture has raised the bar for ray tracing.

The GeForce RTX 30 uses second generation RT cores that can be offered 70% more power than 1st generation RT cores present in Turing. This already shows us that we are facing a very big leap and will finally be able to play with active ray tracing in 4K resolution while maintaining a stable 60 FPS.

It is important to remember that we are still standing before us a hybrid rendering architectureThat said, NVIDIA Ampere retains the division into shaders, tensor cores and RT cores observed in Turing, which means that the same hybrid rendering approach is limited to certain aspects through rasterization, AI for intelligent rescaling and ray tracing.

However, we will see an important development in this regard. The ray tracing function is no longer limited to a specific graphical aspect, ie developers no longer have to choose between using the ray tracing function on shadows, ambient occlusion, lighting or reflections. you can apply it on all of these fronts, And as many of our readers know, Cyberpunk 2077 will be the big proponent of this change. 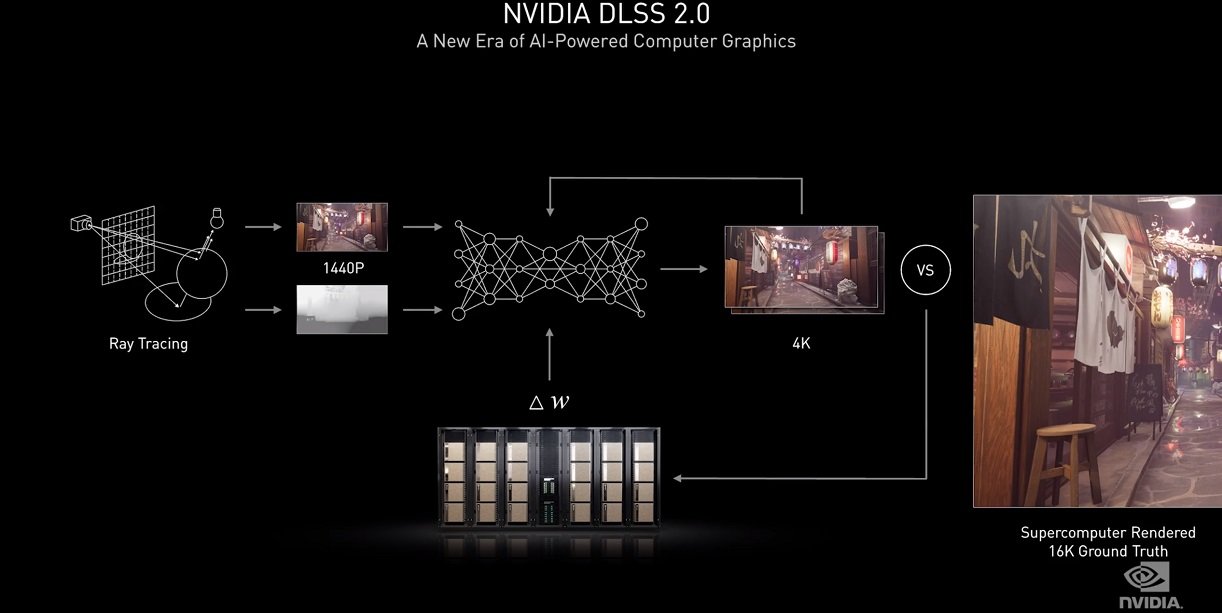 This leap is important because it opens new horizons for the exploitation of new algorithms Enhancing the benefits of artificial intelligence in the world of video games and of course adding value to the GeForce RTX 30 as a graphics solution capable of meeting the needs of every user by balancing work and leisure.

If anyone has any doubts about my last statement, let me explain. The GeForce RTX 30 will have Support in NVIDIA Studio driversThis means that we can use its tensor cores and RT cores in numerous applications and professional tools to get better performance. In other words, its potential isn’t limited to gaming.

It will be interesting to see how Artificial Intelligence evolves to improve performance in games, and specifically the differences NVIDIA has with DLSS 3.0 technology. At the moment we already know DLSS 2.1 enables intelligent rescaling in games under virtual realityThis is a very important advancement as in these environments the image needs to be rendered on two screens. 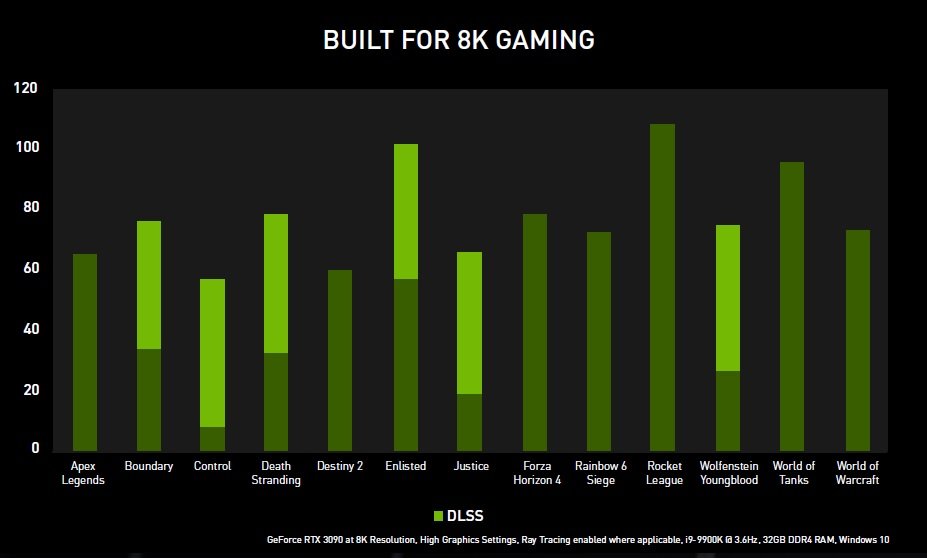 NVIDIA is very proud of the GeForce RTX 30, but especially of the RTX 3090, a top-of-the-range graphics card that is well known It is the successor to the RTX 2080 Ti.

By changing the nomenclature and restoring the “xx90” numbering, NVIDIA has left an ace up its sleeve as it can take the opportunity to bring an RTX 3090 Super or an RTX 3090 Ti to market if needed. Everything will depend on what AMD presents in the next few months. If Sunnyvale brings out a top-of-the-line RDNA 2-based graphics card that can withstand the RTX 3090, I’m sure NVIDIA will not hesitate to post a review of this.

The RTX 3090 is a real monster with 10,496 shaders that NVIDIA says can move. Games in 8K resolution, although using DLSS intelligent rescaling. I know what you think there is a trick, and yes it is true, but the result that this technology achieves was able to outperform the classic native rendering system with TAA filtering, so it’s still good news.

At this point, we were able to confirm that a TITAN RTX was able to move Death Stranding to 8K with DLSS 2.0 while maintaining more than acceptable performance. There’s the RTX 3090 Up to 50% more powerful than TITAN RTXwe can make it clear that it should be able to move the game 8K under DLSS 2.0 at a stable 60 FPSat least in theory. 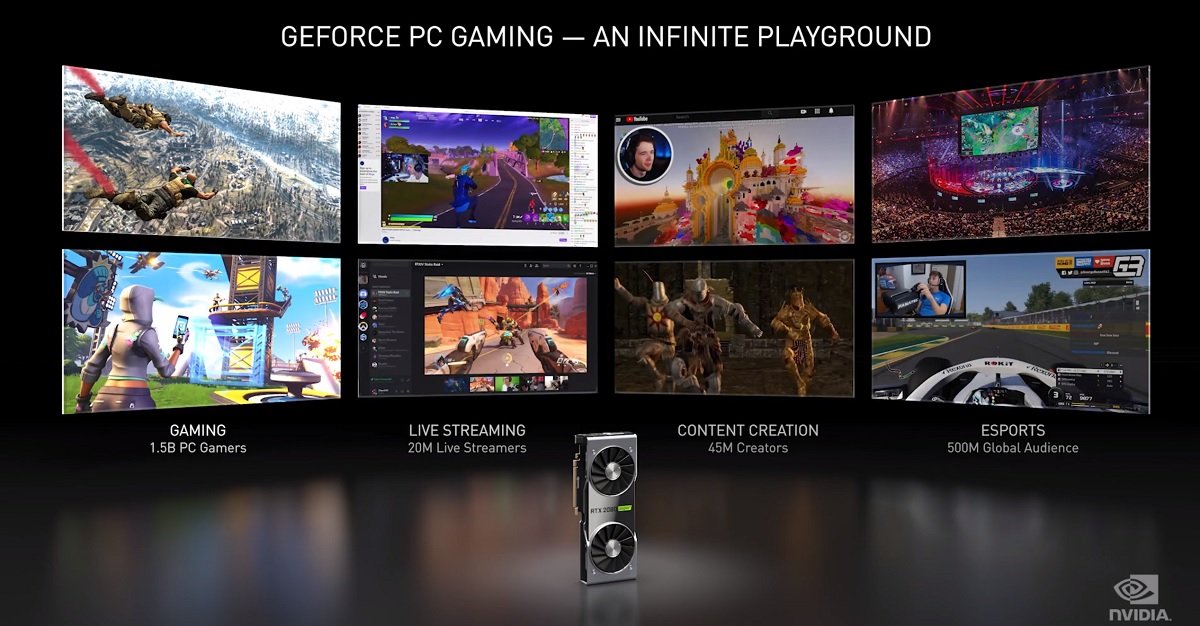 Artificial intelligence for video games has given us DLSS 2.0 technology, a true miracle that is capable of this Render an image with 50% fewer pixels and by combining several images to create a new image of a quality that has nothing to envy of its native equivalent, that is, its equivalent of twice the number of pixels.

With the presentation of the GeForce RTX 30, NVIDIA wanted to raise the bar and has presented new advances This makes it possible to use the potential of artificial intelligence and the tensor cores present in these graphics cards.

We can highlight among the most important innovations NVIDIA broadcastThis allows us to transform our space into a professional studio thanks to a number of features that are an important added value for any streamer, such as: B. Noise suppression through artificial intelligence, creation of virtual backgrounds and automatic focusing of the camera.

In principle all this news too will be compatible with the RTX 20 seriessince they are based on tensor cores and these graphics cards contain this type of hardware.

Yes, I know more than one has just put their hands on their heads, but this point is very easy to understand. Let’s see it directly and clearly:

The numbers don’t lie. It is clear that the GeForce RTX 30s aren’t cheap and that the price of graphics cards has risen dramatically in recent years. However, that doesn’t mean the GeForce RTX 30 doesn’t offer solid value for its price-performance ratio. 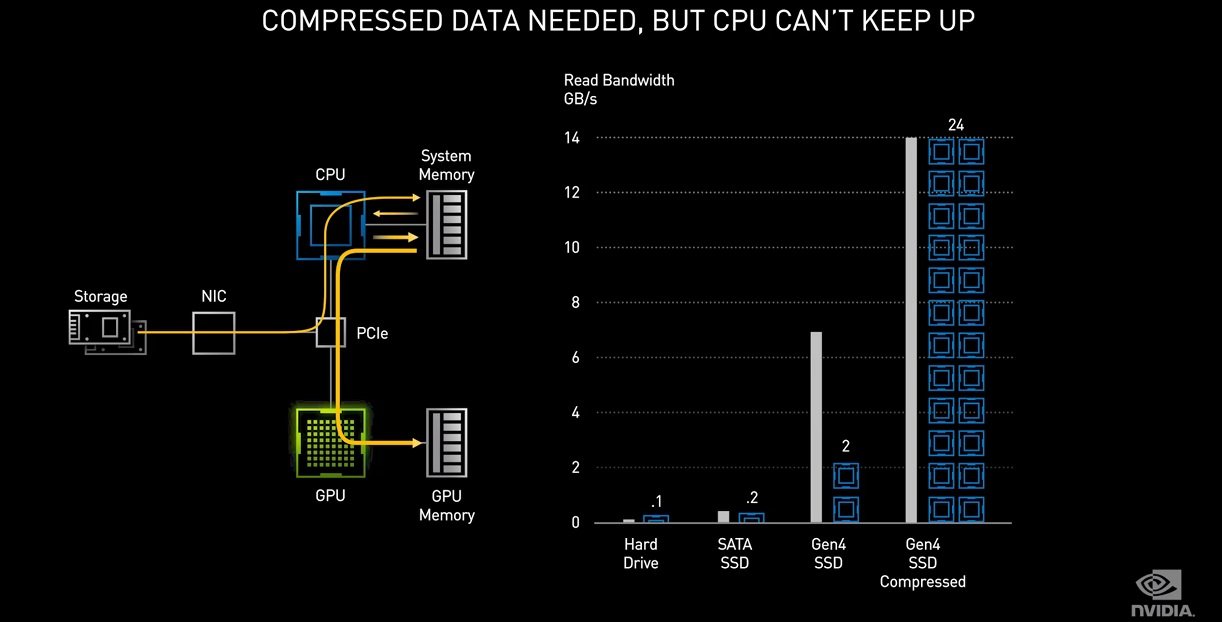 As we told you at the time, it is a technology that enables the use of the GPU Accelerate the workload of decompressing data from the SSD. This significantly reduces the CPU usage for these tasks.

Multiple sources ensure that the workload that this represents at the CPU level is large enough that Up to two cores required complete for good decompression performance. Thanks to NVIDIA’s RTX IO technology, this problem would be a thing of the past as the GPU would take care of everything.

This technology is based on a base similar to the one we saw in Xbox Series X, and yes it is supported by microsoft, in fact it works with the direct storage api that is present in directx 12. There is bad news, however, and that means it needs to be endorsed by the developers in every particular game, which means it will require an additional effort that not everyone will be ready for.

Well applied, this technology would make it possible Minimize loading times and resource consumption at the CPU level.