The new Ryzen 5000 processors from AMD marked a turning point in the industry. The company that Lisa Su runs achieved what seemed impossible a few years ago, outperform Intel both in performance (single and multi-wire) as well as in energy efficiency and in the manufacturing process. This huge success has increased consumer interest in the Ryzen 5000 and has driven the adoption of these new processors both when assembling new PCs and when upgrading existing equipment.

If you’ve decided to mount or upgrade your PC with a new Ryzen 5000 processor, you’ve made an excellent choice, but before you start shopping for everything you need let me share this with you. five mistakes to avoid. These errors are largely based on pretty old myths that have no real basis, and in fact, they have a lot to do with what we saw in this AMD Ryzen 3000 guide at the time.

In case you still have any questions after reading this guide, don’t worry, you can leave them in the comments and we’ll be happy to help you resolve them. In fact, I recently set up my new PC and I chose a Ryzen 7 5800X processor It has worked like a charm ever since. So don’t be shy. I can help you with any questions that come up both on the fly and at the end of this article. Well, let’s get down to business.

A few months ago we were in a difficult situation. We knew the PS5 and Xbox Series X would shape the future of video game development, and that both would have an eight-core, sixteen-threaded Zen 2 CPU. This led some to believe that having a Ryzen 7 3700X was essential to be able to play new generation games with all the guarantees. but the reality was very different.

Both consoles have one CPU Zen 2 pretty trimmedWith just 8MB of L3 cache, split into two blocks of 4MB each, they work at a low frequency (3.5GHz and 3.6GHz) and don’t have the same command support as a PC Ryzen 3000, for which we are doing this don’t actually need a Ryzen 7 3700X. We talked about this recently in our guide on transitioning to the new generation of games. I therefore invite you to take a look.

By all of this, I mean that when you mount or update your PC, you shouldn’t have to think about the processor. If you are on a tight budget, your best option in the Ryzen 5000 series is a Ryzen 5 5600X. The Ryzen 7 5800X has more cores and more threads and has a longer lifespan. In the short term, however, it is more profitable to buy the first one and invest the money saved in another component, e.g. PCIE Gen4 SSD.

If you don’t want to use your PC just for gaming (e.g. for work), it makes sense to consider mounting a Ryzen 7 5800X, as long as the applications you are using depend more on the IPC than on parallelization. If not, it makes more sense to buy one Ryzen 9 3900X. Higher models such as the Ryzen 9 3950X and Ryzen 9 5950X only make sense if you work with applications that parallelize high workloads across a large number of cores and threads.

2.-No Ryzen 5000 processor needs to be overclocked

And the reason is the same one we saw back when we talked about why it’s not worth overclocking a Ryzen 3000. Use Ryzen 5000 processors an intelligent turbo mode This will maximize CPU speed and adjust it based on several factors:

So if we only have between one and four active threads, my Ryzen 7 5800X will reach the 4.840 MHzA number that exceeds the turbo mode reported by AMD in this processor’s specification breakdown and is set to a maximum of 4,700 MHz. I’ve seen stable highs of 4,640 MHz for all active cores and threads.

Turbo mode makes intelligent adjustments and balances both fuel consumption and temperatures. This means that the best possible result is achieved without sacrificing energy and thermal efficiency, i. H. without triggering consumption and generated heat.

Overclocking could bring the Ryzen 7 5800X to it 4.7 GHz stable, but would have to exceed 1.4 volts. The processor would use more power and generate a lot more heat, which is not recommended and not worth gaining 60MHz more in each core. On the other hand, it must also be taken into account that by overclocking you would be giving up the peak of 4,840 MHz that Turbo mode achieves for tasks that do not use more than four threads.

The conclusion is clear It’s not worth overclocking a Ryzen 5000 processor. And yes, that’s good as we get to buy the processor, put in an affordable cooling system, and not worry about everything.

Unfortunately, the myth that AMD processors associate with high operating temperatures is not going away, and it is today it just doesn’t make sense, but rather takes the side of Intel, especially with its top of the line models, which was not the case when this myth was born.

Controversy aside, let’s move on to what is important. The Ryzen 5000 processors are manufactured in a 7nm process, have an optimized design compared to the Ryzen 3000 and use a new architecture, Zen 3, which has improved performance, mainly when pulling an increase in the CPIwhat AMD allowed maintain really good working temperatures.

For example a Ryzen 5 5600X With the heat sink available from stock, it can work without any problems, a Wraith stealth. The chip remains at around 80 degrees under full load and after several runs in Cinebench R23. It is important to note that this scenario is not real as no game is currently able to keep it constant at 100% load and therefore registers temperatures closer to the range of 60-70 degrees in real scenarios.

Buying a good refrigeration system enables us enjoy certain benefits If you drive a Ryzen 5000, such as However, such as less noise, lower operating temperatures, and a turbo mode with a higher maximum peak, this does not mean that it is a must. For processors that are not equipped with a standard heat sink, such as B. the Ryzen 7 5800X, we don’t need a 360mm AIO liquid cooling system to move us at an optimal level An inexpensive 240mm kit.

For the more powerful models like the Ryzen 9 5950X, that has 16 cores and 32 threads, yes it is advisable to assemble a high-end cooling systemAs a 360mm AIO liquid cooling kit, it can reach its full potential without temperatures being an issue.

4. RAM memory and Ryzen 5000 processors: what is important and what is not? 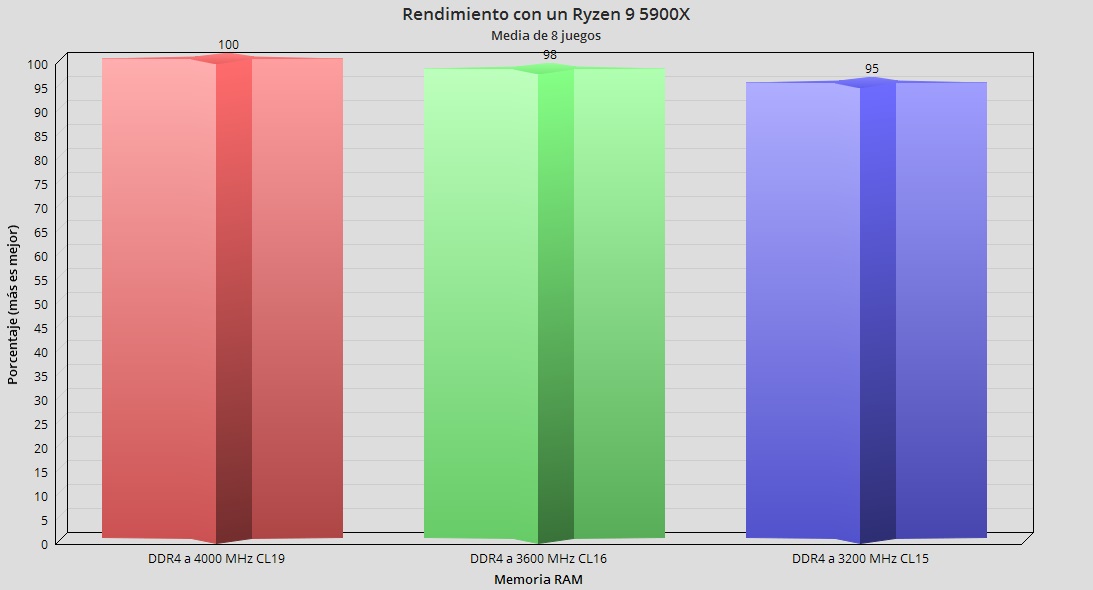 RAM memory was another big myth associated with the Ryzen 5000, although the truth is in it Stays since AMD released the first generation Ryzen. I remember at that time the difference in performance that one RAM running at 2,400 MHz could make over another RAM running at 2,933 MHz was huge, although the XMP profiles did not always work and in many cases Latencies and frequencies had to be adjusted manually.

Not everyone has bothered to “tinker” with both elements, and this has resulted in inaccurate opinions and analysis that spawned a large number of unfounded myths that unfortunately were retained over timeand they have even reached our days, something incredible considering all that has rained since then.

If you’ve been assembling a Ryzen 5000 processor and looking for information, you’ve read this such crazy things As if you need 4,000MHz RAM with very tight latencies or that it is important that you mount “X” brand modules and that you install four or four memory modules because you will notice a huge difference in performance.

The truth is that yes, the Ryzen 5000 Scale at the speed of the RAMand also show a slight performance improvement in certain cases when used in “dual rank” memory configurations that occupy the four slots on the motherboard. However, this does not mean that it is important to reach 4 GHz and that we must or must buy a kit with four modules. Actually by putting together a kit from DDR4 a 3,600 MHz CL16 We would already be at an optimal level in terms of performance and price-performance ratio.

5.-The motherboard plays a role in assembling a Ryzen 5000, but within a certain range 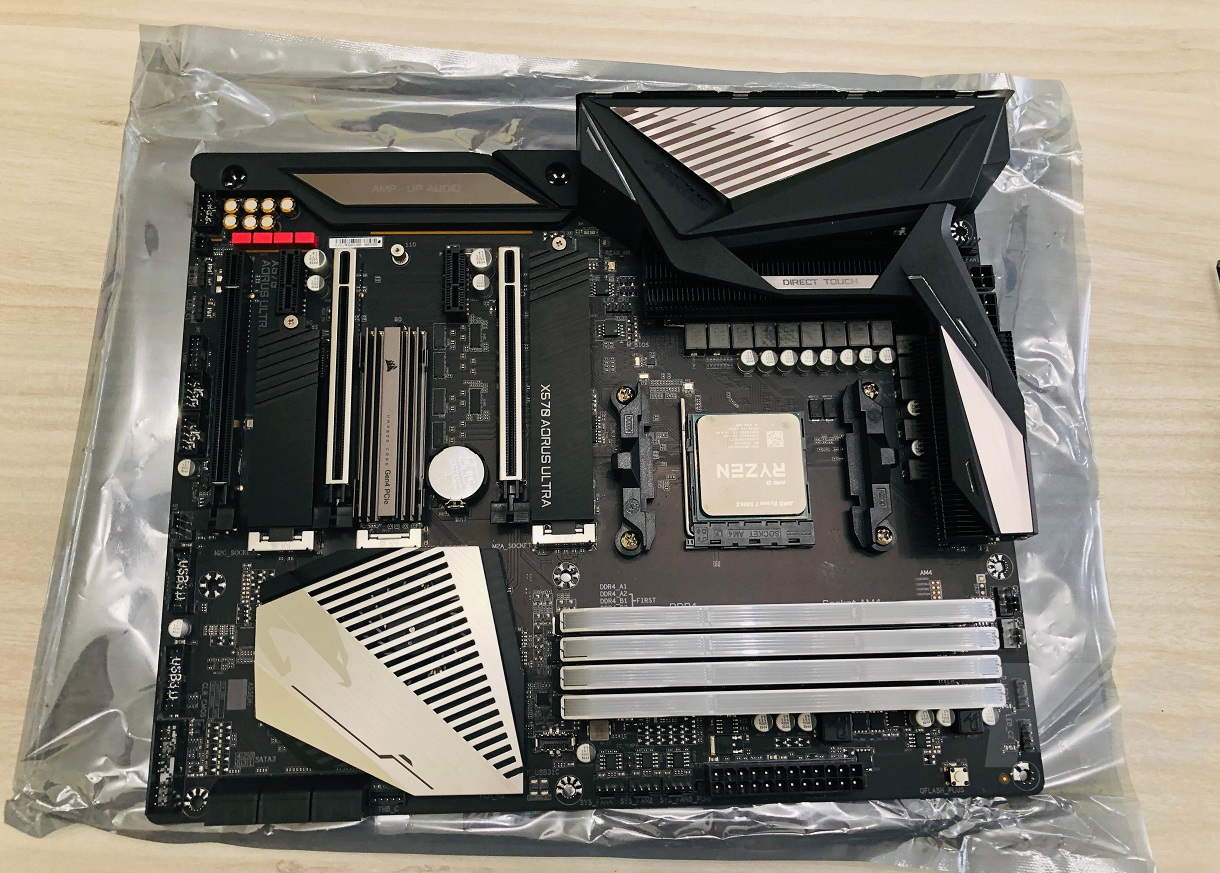 Yes, the motherboard matters to every type of PC we want to assemble, but always within a reasonable range. Ultimately, the choice of motherboard depends on the other components of the computer. If we’re assembling a Ryzen 5 5600X with Ryzen 5000 processors and we’re on a tight budget, we can go for a B550 motherboard that is out there between 100 and 150 eurossuch as the Gigabyte B550M Aorus Elite, which costs 101.89 euros and is very good value for money for this price.

You don’t need a top-notch motherboard to assemble a Ryzen 5000. Note, however, that it must meet your requirements, have the necessary ports and expansion slots, and also have a System VRM This enables you to carry out the planned enhancements. For example, the above motherboard has a power system from 5 + 3 phases, while Gigabyte X570 Aorus Ultra has a feeding system of 12 + 2 phases.

It is clear that a more expensive motherboard will generally offer a higher level of performance, in fact the more expensive models even come with it Wi-Fi 6 and built-in bluetoothBut not all users need such a range of features, which is why it is not always worth paying for. Even if you’re installing a high-end processor like the Ryzen 9 5950X that needs a good VRM, It makes no sense for you to buy a motherboard worth more than 300 euros.

Ryzen 5000 processors don’t need an extremely expensive motherboard If you are on a tight budget, you can go for a B550 motherboard. As mentioned before, you can accompany it with a Ryzen 5 5600X and Voila. You will enjoy a good user experience.

Note: This selection contains some links from our affiliates, but none of the products included have been suggested or recommended by them or their manufacturers, and are selected at their own discretion.