The Google search engine home page has undergone a long list of modifications in recent years. However, the general design of the search engine has not changed in essence: it has always consisted of the logo, in colored letters, Google on a white background.

After enabling dark mode on its Android and iOS versions, Google is now bringing this functionality to the desktop format as well

From now on, users who wish to do so will be able to change this design and use the Google search engine on PC in dark mode. The function will be available, according to the company, over the coming weeks, although some users can already enable dark mode.

The company has decided that, after incorporating this dark mode in its versions of Android and iOS for mobile, it is now time to do the same on the PC. The dark mode in Google search comprises two modifications in the design of the page. Not only does the background of the page become dark gray, but also the Google logo is no longer in colored letters, but also white.

To activate the dark mode in the Google search engine you have to click on the “Settings” tabwhich appears in the bottom right corner of the screen. Doing so will bring up a box with a series of options and, at the bottom, it will say “Dark Theme: Off”. Once the user clicks on that sign, the dark mode will be activated immediately. 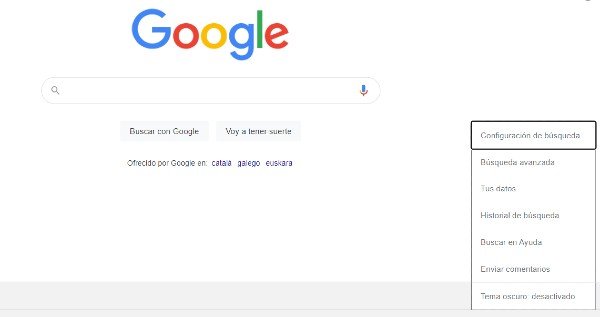 Already last December it was known that Google was conducting tests to incorporate this dark mode in your browser. Also, this August the company activated this tool for its Google Maps app on iOS.

You can learn more about Google’s Dark Mode in the following video: