The dark mode is a graphic theme that improves visualization in some environments, protects the eyes of users in low light environments and also some screens, especially OLED that are more prone to problems due to the increase in contrast used by this type of panel, in addition to improving autonomy in mobile-portable devices by its -generally – low brightness.

Dark mode in systems and applications

This type of special display mode is fashionable and has spread a lot in recent times. Not all applications have a dedicated dark mode and some of them get it from the operating system configuration where they are installed.

Nor is it equally achieved in all of them, nor does it offer the benefits mentioned, although given its success, all software providers are improving it or are in the process of doing so. Today we review its activation in the main systems, services and applications.

Of the best implementations you will find. It looks great in dark environments and also in others with more light, but it does not reach the entire interface equally nor is it equally achieved in all components. It is activated on the Settings> Personalization> Colors page and you can customize the default mode of Windows and applications. In contrast to the dark mode and for users who prefer the exact opposite, Microsoft has also implemented a "light mode" that is enabled in the same tool. 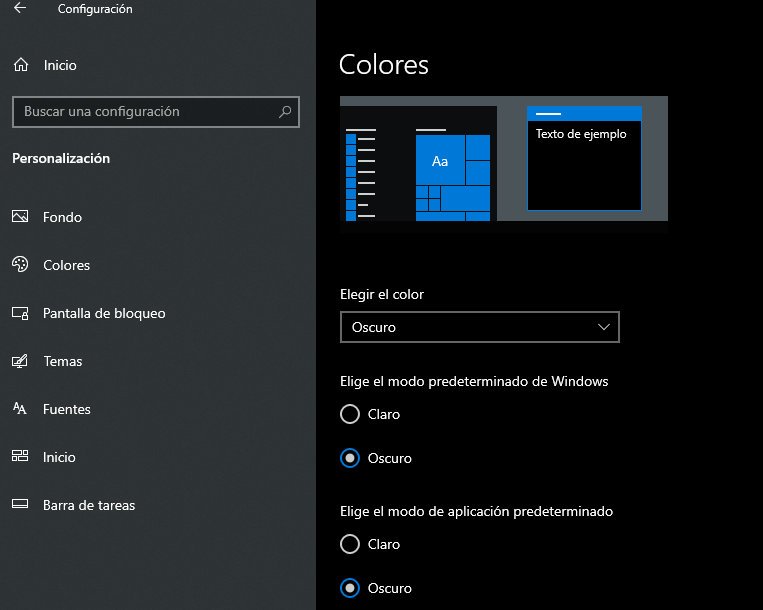 Like Windows, macOS also has a dark mode configuration for the entire system. You can find it by opening Apple> System Preferences> General, selecting the Dark, Light or Automatic options in Appearance. If you select the latter, the general theme will change according to the time of day in your time zone. Applications that support dark and light modes, including all Apple, will also change automatically according to the time. 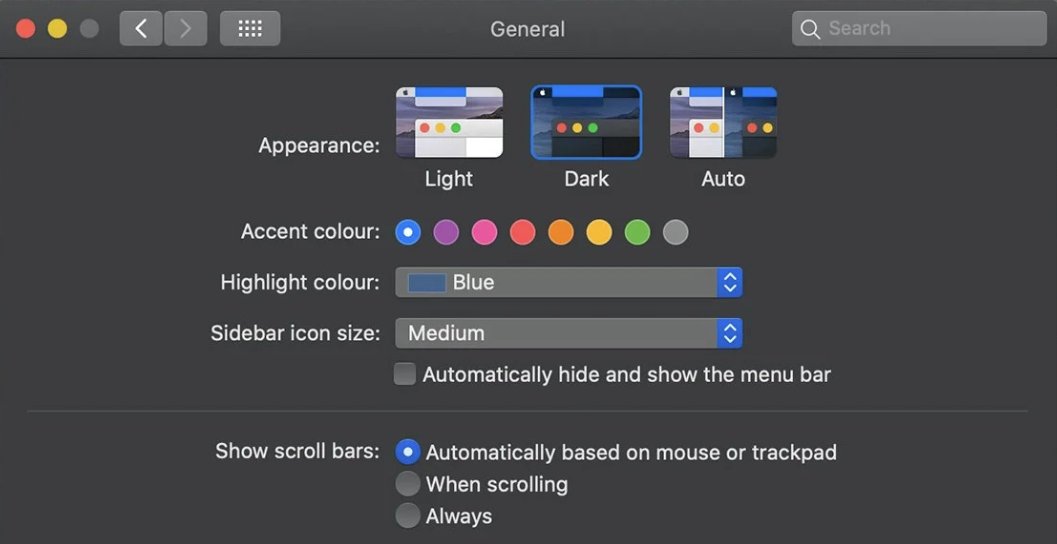 The vast majority of GNU / Linux distributions and the main desktop environments such as KDE and Gnome have options to achieve this type of viewing mode and third-party software allow great customization. An example of a native solution will be seen in Ubuntu 20.04, with a selector located in the System Configuration> Appearance that – although not called as such – allows us to opt for a dark, light or standard mode. 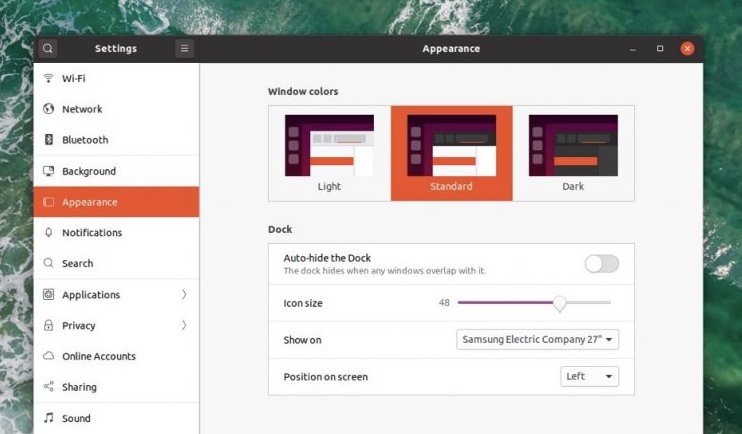 The way to enable dark mode in the Google system will vary slightly depending on the manufacturer of the terminal and the custom interface you have enabled. In Android 10, you can find it in a general way in the menu Settings> Display, activating the toggle switch Dark theme to change colors. Any application that supports this mode, both internal and calendar or photo gallery or external as Gmail, will automatically enable this mode. 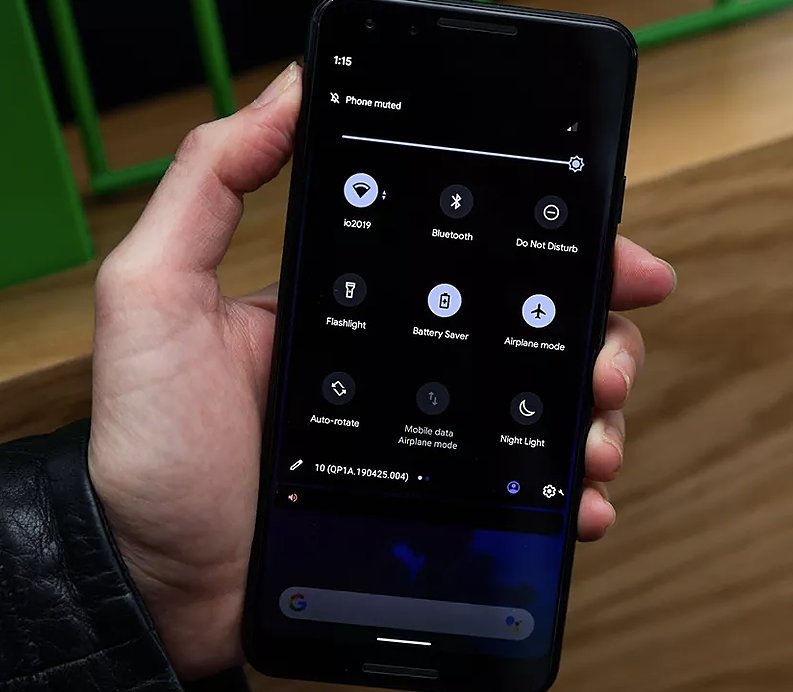 It was one of the novelties of iOS 13 and is a mode fully adapted to the system and apps, which allows you to take advantage of the OLED screens of the most current iPhone and improve autonomy since these panels turn off the pixels to represent the color black. It is enabled in Settings> Display and brightness and as in macOS it offers all three modes, light, dark and automatic. In the same way it can be enabled in the specialized operating system for tablets, iPadOS. 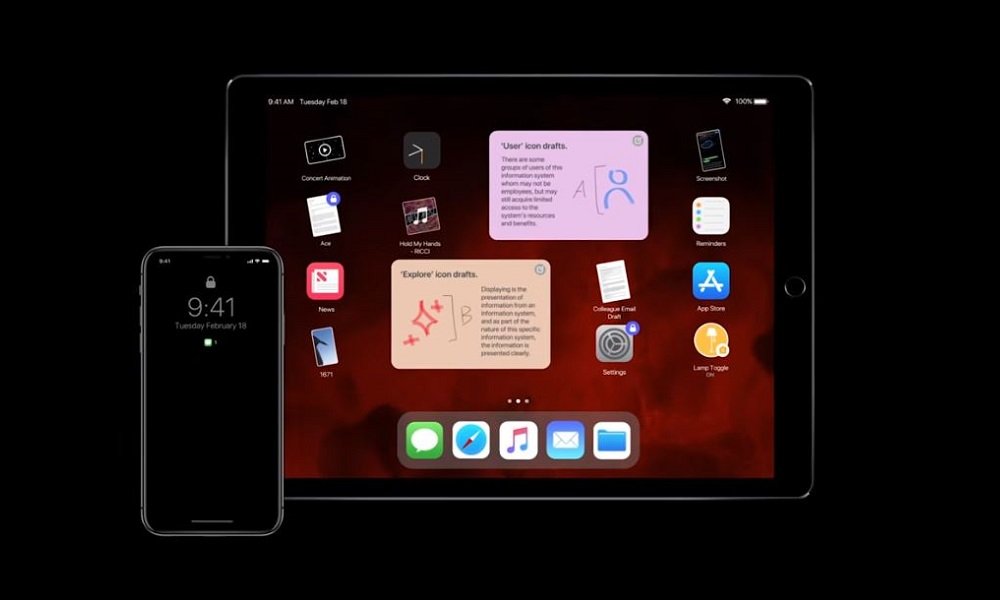 On Android it is enabled directly through Settings> Themes, selecting the dark, light or system default mode. 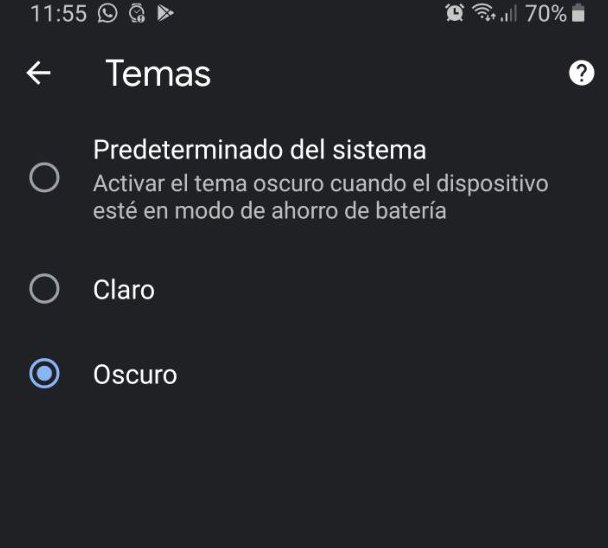 In the desktop versions you can enable it for a long time with the command -force-dark-mode- in the destination of the application as we explain in this practical. It also has external themes such as Morpheon Dark, one of the most popular. This theme makes the tabs bar, the title bar, the toolbar and the new tab page dark. 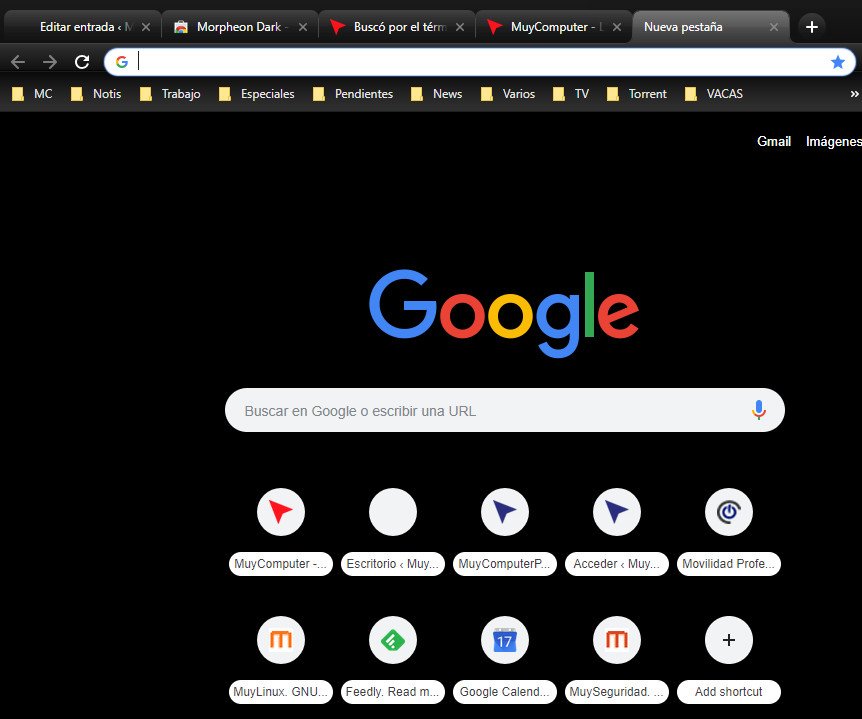 The dark mode of Firefox is for the moment a hidden feature that must be activated manually through the advanced preferences of the browser and is performed as we indicated in this practical. The first thing you have to do is go to "menu> Accessories" and in the "Topics" section choose the dark one. Then enter about: config – filter the ui.systemUsesDarkTheme option and change the number to "1". It works on the desktop version and you don't need to reboot to see its effects. 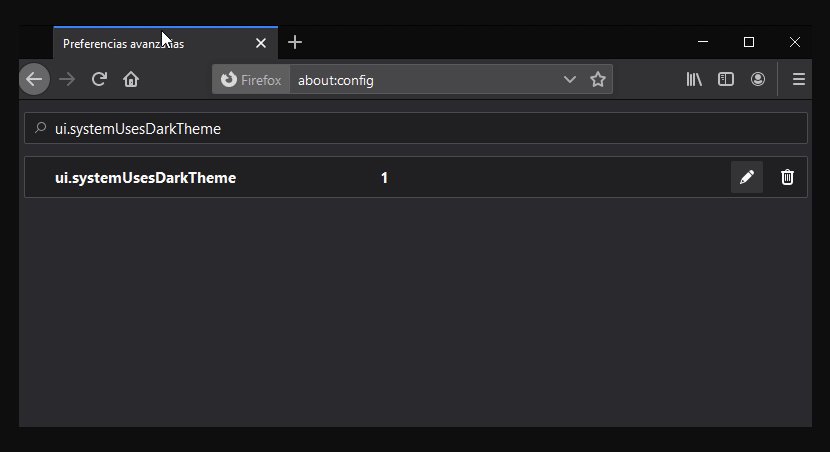 Microsoft's new browser also has a dark mode and is enabled very simply through the Menu> Settings> Appearance. There you can select dark, light or default mode. It works independently of the one enabled in Windows 10.

The most popular messaging client is developing an official dark mode and until the final version arrives it can be activated on Android with this method. WhatsApp Web works connected to the browser, downloading this extension (only available for Chrome or Firefox) and following this process. 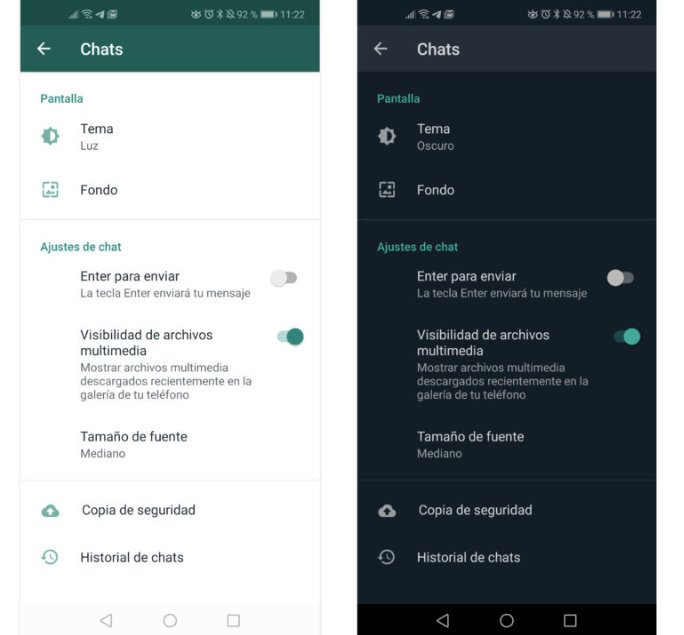 Much better is the support of the great rival of WhatsApp and our favorite, which has its dark mode for a long time. It is activated directly from the menu and is as simple as sliding the button and changing modes: 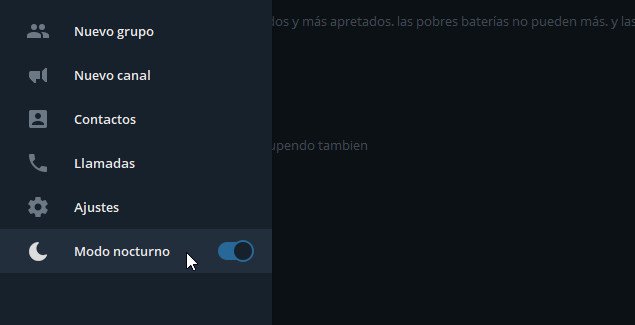 It is activated from the Configuration> Themes tool and is used for the current version of the email client and previous versions with different interfaces. 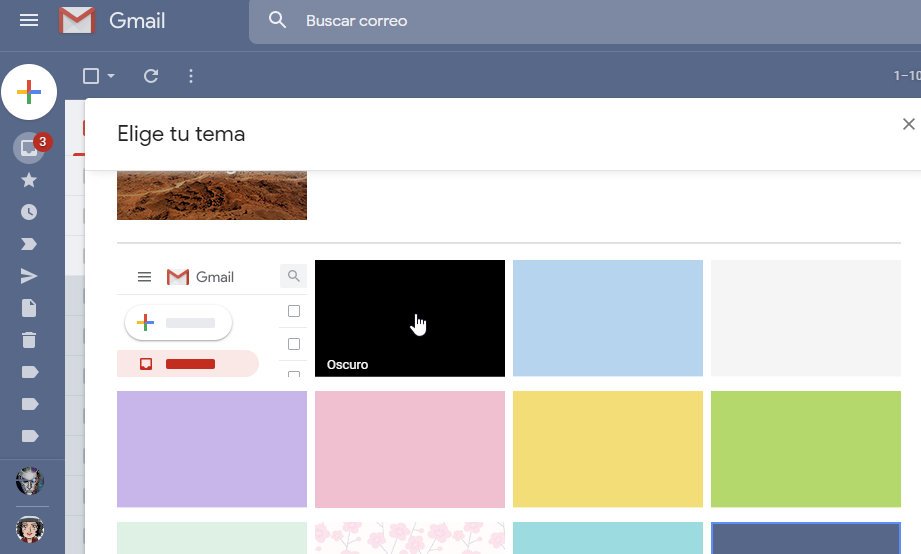 Other applications with dark mode

– Google Play. The application and content store for Android does not offer a dark mode as such, but it takes the Android 10 itself, so once you have chosen this in the system, when entering the Google Play Store the background colors , fonts and icons will be reversed, without further changes in design, functionality or options.

– Twitter. The microblogging service has a dark mode integrated into both iOS and Android. Touch your avatar in the upper left corner, then Settings and privacy, Display and sound and Dark mode. The app can follow the configuration of your device, or be forced into the application itself.

– Youtube. On Android, YouTube follows the system settings and also allows you to adjust it through the avatar> appearance. Em iOS does not follow the system preference, but it can be activated in Settings> Dark mode.

– Instagram. Without Android and iOS, you'll see that it follows the address of your device's configuration. Whenever you are running Android 10 or later, or iOS 13 or later, Instagram will match the operating system settings described above.

– Google Calendar. It works like Gmail. On the application settings page select General and then Themes. In Android, it can be configured to use the default, light, dark or default operating system mode.

– Force dark mode on all websites. Would you like to go one step further and force the dark mode on all the websites you visit in the purest style of Chrome (or any of the derivatives of Chromium, since we are, it works for everyone)? Firefox is not there yet and to know if it will be, so using Dark Reader is your best option.

As you have seen, there is a lot of software that allows you to use this dark mode, although not all of them enable it from the same application, nor are they equally well enabled, nor do they offer the same benefits depending on the environments. Nor do all users who prefer clearer display modes like it, although the ideal for the future will be to obtain a good implementation of both and sufficient customization. And if it can be specific modes for each application independent of the operating systems where they are installed.

How to enable google dark mode

Who are the creators of the major cryptocurrencies?