Windows 11 has its virtues, but it is not a prodigy of customization as Windows 10 was not. Today we propose a free application, open source and simple interface, but with enormous power that facilitates the task for the user who wants to customize it want to leave to your liking the next Microsoft operating system.

Windows 11 is built on Windows 10 in its inner workings and Windows 10X in the visuals. It is not a revolution, although it does bring that touch of renewal that users have been asking for, although several of the features promised as new features will not be available at launch and will arrive later in subsequent updates.

Microsoft has room for improvement, but after the tests we have been doing with previous versions we can already assure you that it will not stand out in what we call “customization”, even if the general system configuration tool has been redesigned (adequately in visual terms and organization for our taste) and has added features, some displaced / removed from the classic control panel.Â Substantially vary the appearance, the behavior of its components or gain access to advanced features, is another matter and these are not tasks that are directly accessible in the user interface.

How to customize Windows 11

ThisIsWin11 is an unofficial customization tool that brings together a bunch of windows 11 settings, all under one umbrella. Dubbed as Â”The Real PowerToys for Windows 11Â”, is free, open source and really powerful because it is not limited to customize visual elements, but as good software ‘all in one’, offers settings for almost the entire system, information on new features and comparison with previous versions, automation of certain functions, improved privacy by managing telemetry and even takes care of problems that are repeated from Windows 10 as the Bloatware that we do not seem to be able to get rid of.

Its installation is as simple as any Windows executable. We access its GitHub page and download the latest version available, currently 0.75.0. Unzip the .zip file in any folder and run the Â “ThisIsWin11.exeÂ” file. Before making any changes, we recommend creating a system restore point so that if something goes wrong you can recover it Remember that both Windows 11 and this tool are in beta phase.

The application currently offers five different tools and does not rule out adding more in the future. We have tested it on the beta version of Windows 11 build 22000.194, although it should work on other versions of the system.

Home. This tool guides the user through each Windows 11 configuration, allowing you to make changes and customizations on the fly. Select the arrow in the lower right corner to move between pages or jump to the item you want to configure using the drop-down menu. Additionally, each page includes a description of what you can do and what’s new in Windows 11. 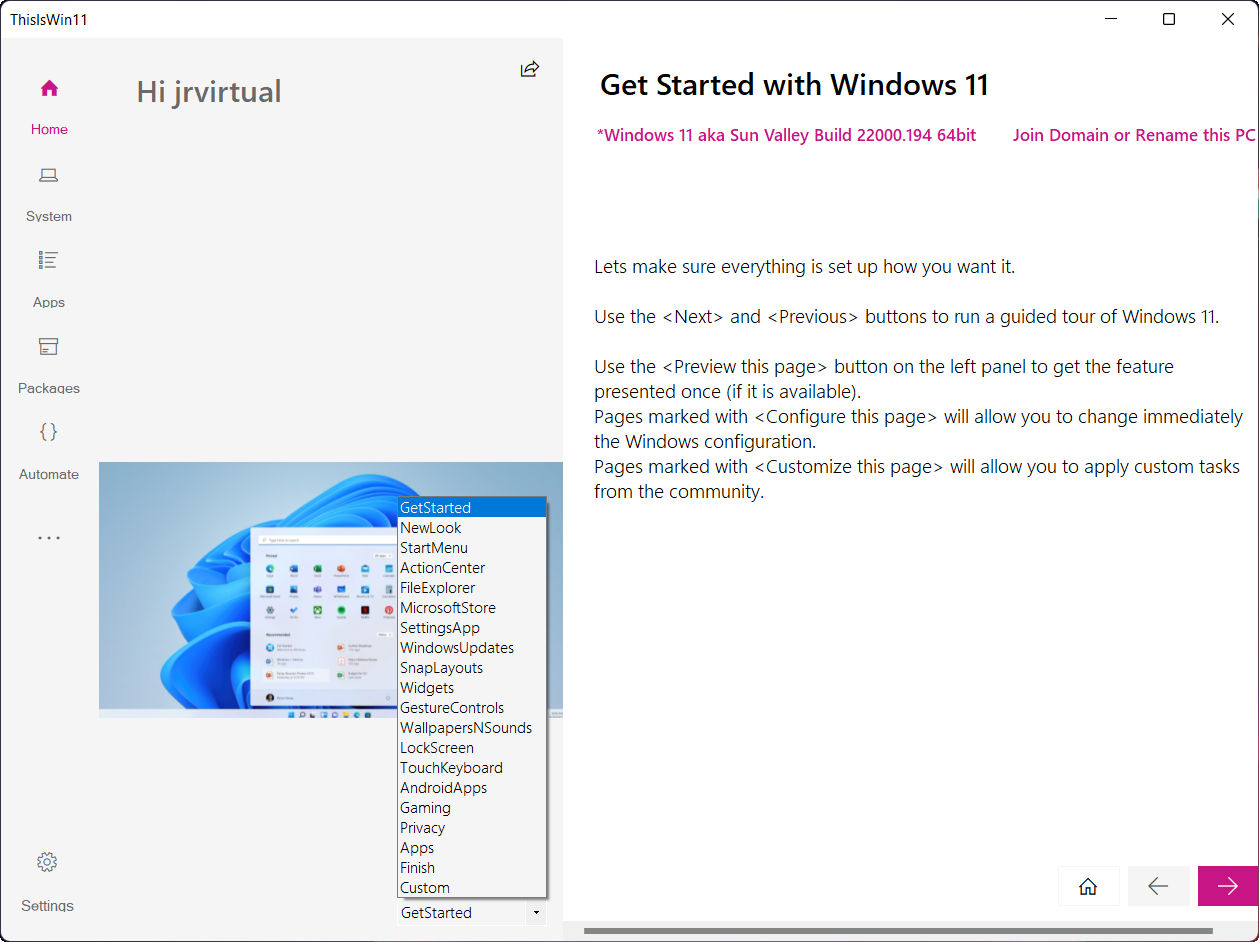 System. It allows you to enable and disable numerous settings, listing all possible configuration changes. There are five categories to act in: Personalization, System, Games, Privacy, and Application Permissions. Under each category, you’ll find a list of new Windows 11 features that you can disable. You can also click the Check button to automate the process. 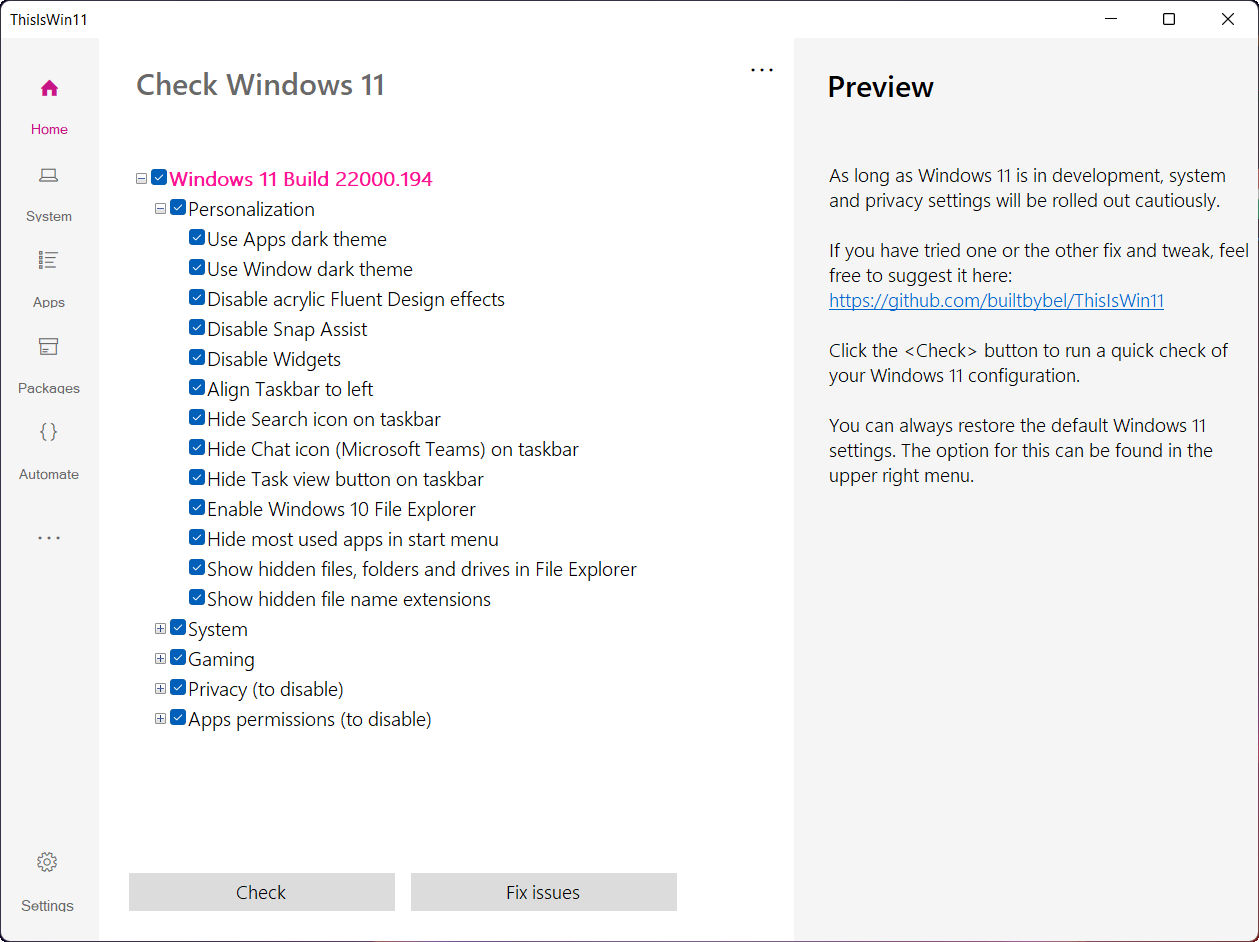 Applications. A handy installer and uninstaller for the default applications of Windows 11. As in Windows 10, the list is extensive. A few essential ones, some interesting ones and others that could be included in that disastrous Bloatware from which the latest Windows do not escape. The tool keeps the discarded applications in a kind of recycle bin, so they can be recovered. You know that some are connected to others and may not work without them. 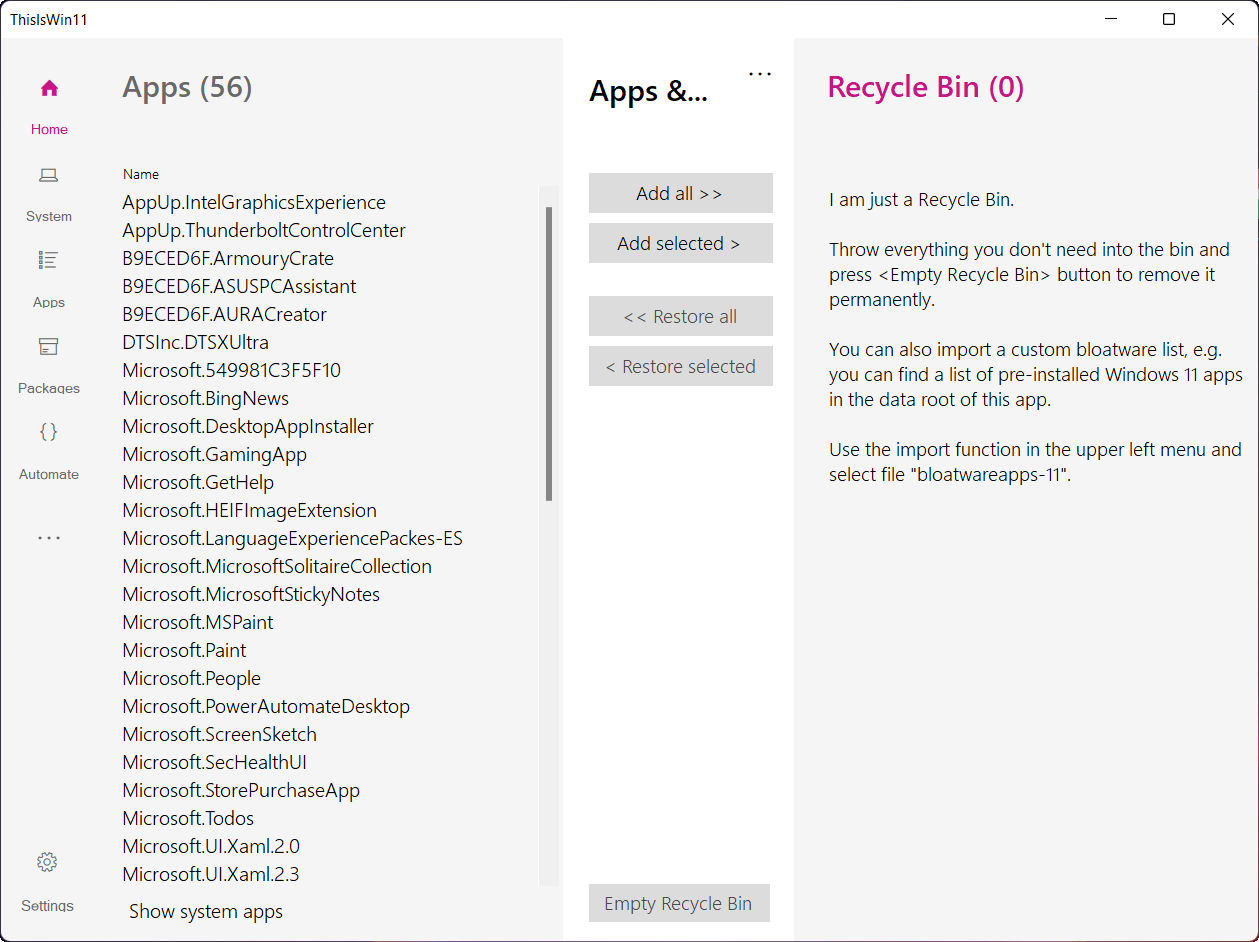 Packages. If you have used any Linux distro you will be familiar with this package tool with which you can download and install the latest version of a long list of applications. Microsoft also offers a “package manager” called Winget as a separate system tool. ThisIsWin11 is more useful and intuitive. 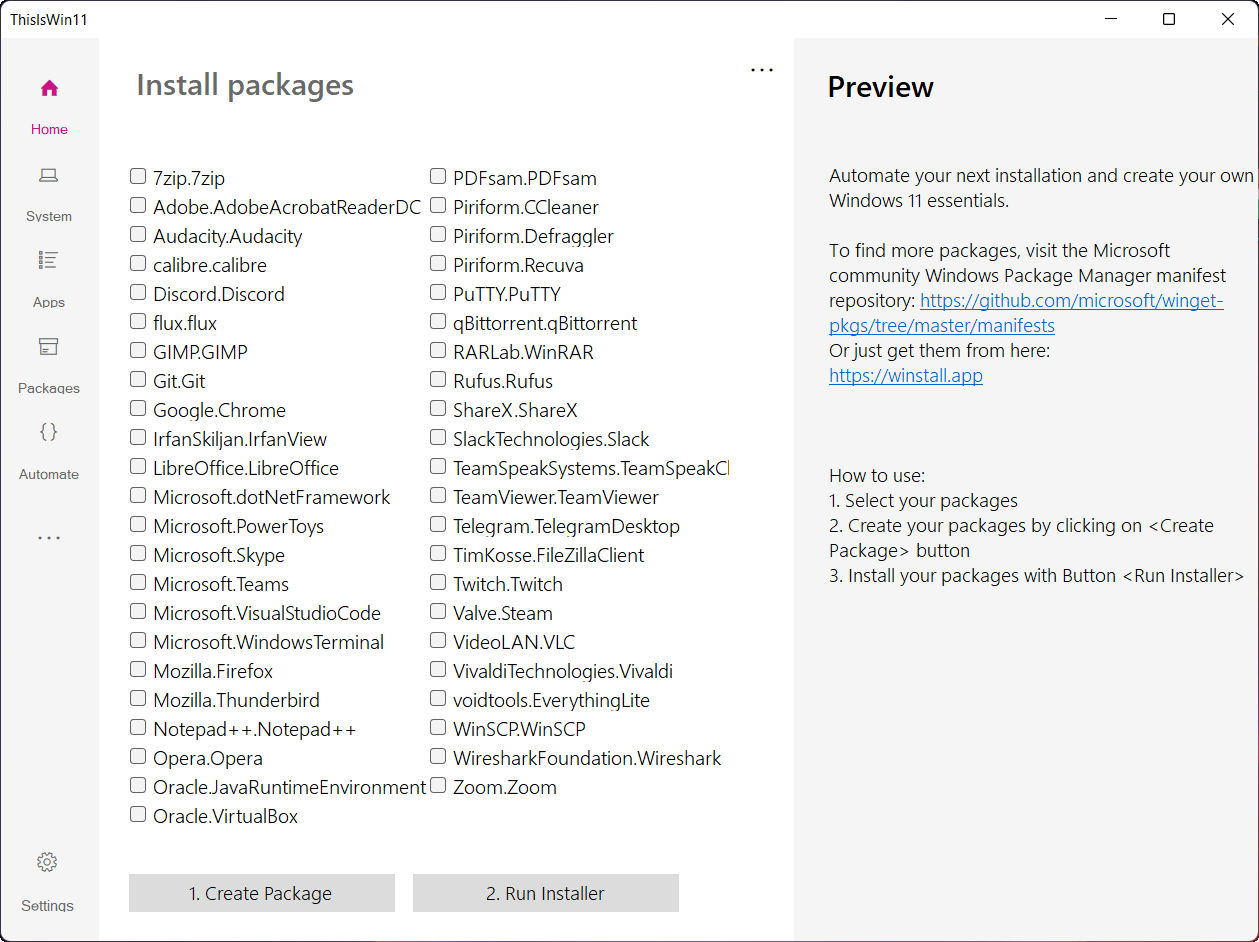 Automation. A task creation and scripting tool for Windows 11. These scripts enable certain functions or allow you to schedule specific tasks to run. Very useful, for example, to remove telemetry from third-party applications. 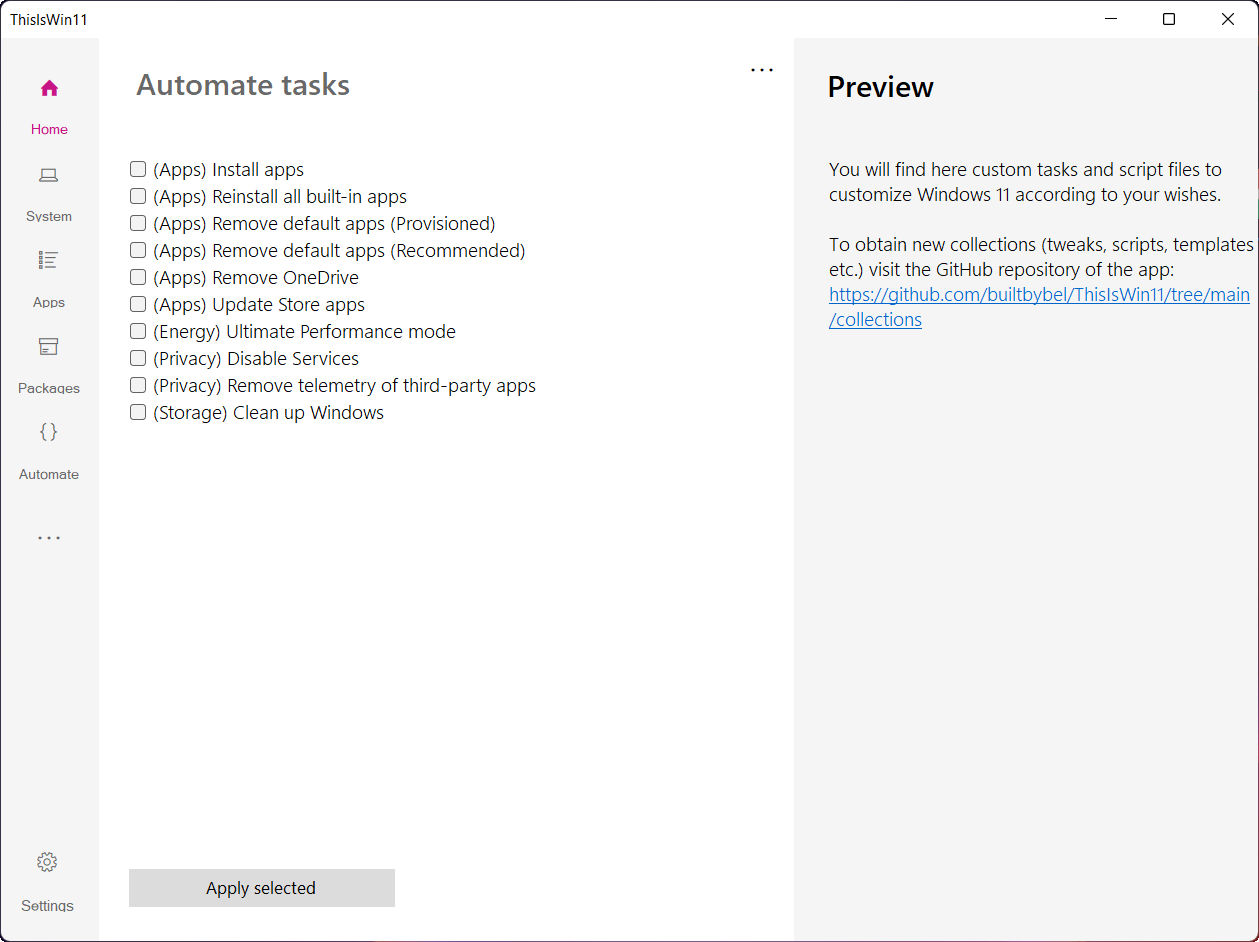 As you may have read ThisIsWin11 is very powerful. You have to know what you are doing, but it allows you to tune the system to any consumer’s taste. Free, open source and highly recommended. But be careful with it, it is in beta phase.

We already said that Windows 10 does not stand out in its ability to customize. A few months ago we published a guide where we proposed a dozen solutions to customize it. Some of them will work on Windows 11 and it is certain that its developers will publish specific versions for Windows 11. Most of them are free and some of them are open source. In case you are going to stay on Windows 10 and want to tune your system, we remind you of the most interesting ones:

– Winaero Tweaker (customization). One of the best known and most complete applications for customizing Windows is Winaero. Its developer gathered most of the available options in an all-in-one tool and under a single interface. It has a huge amount of features to vary visual aspects; colors; size of window borders, title bars and menus, as well as the audio section and in general the behavior of the system.

– Open Shell (startup menu). The Windows start menu is a component that has been with us since Microsoft implemented graphical interfaces in its operating systems. If the design implemented until Windows 7 satisfied all kinds of users, what came after was a nonsense, even eliminating it from Windows 8. The latest versions of Windows 10 have improved the situation, but if you liked Windows 7 better, Open Shell is one of the best you can use.

– TweakNow PowerPack (Windows behavior). Aimed at customizing the way Windows 10 behaves rather than the way it looks, this application is one of the most comprehensive you can find. It offers access to over 100 hidden Windows settings, a registry cleaner, RAM optimizer, profiles for virtual desktops, revamped startup manager or ability to allocate CPU resources for intensive applications.

– Taskbar Tweaker (taskbar). Probably the best customization tool for the taskbar. It includes some settings that Windows 10 already offers, but most of them are not accessible even by acting on the registry.

– Ultimate Windows Tweaker (personalization). Another of the most complete tools for tuning Windows 10. It offers more than 200 settings, privacy and security; performance; context menus; search and much more. It also works as a taskbar customization software and allows you to change the designs of battery, date and time, volume, show or hide frequent folders and recent files, and others.

– CustomizerGod (icons). There are few better free developments dedicated especially to the management of system icons, a component that Microsoft has renewed in the latest versions of Windows 10. You can change those of the Start menu, taskbar, battery, login screen, time and date, and many more.

How to customize gesture control for AirPods