The Windows advanced menu is a good way to to access the main tools quickly and conveniently of Microsoft operating systems. Widely used by advanced users and professionals, it is an alternative/complement to the start menu or keyboard shortcuts.

Don’t think that the start menu controversy is over. And look that Microsoft had it easy considering that the Windows 7 was almost perfect. Someone in Redmond considered that in Windows 8 it was necessary to eliminate it and mounted a controversy that still resonates. It returned it in Windows 8.1 and improved it in Windows 10, but it did not end up pleasing either. The Windows 11 is different, more attractive and better designed for the desktop, although it lacks development as other parts of the interface, see the taskbar.

We talk about the controversial start menu to introduce another less known, the Windows Power Menu which was released in Windows 8 and became indispensable because it did not have the startup one. We still use many users despite the fact that Microsoft has reduced some of its functions.

It is very easy to access in two ways: 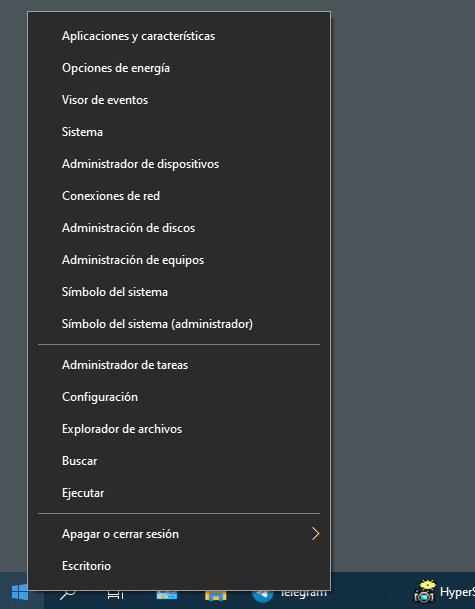 From there we will see a context menu that offers quick access to some functions, simple and advanced, but that we tend to use frequently. We review them:

Applications and features. It accesses the page of the same name of the System Configuration tool. It used to be much more powerful, as it accessed the Control Panel which in addition to adding or removing programs provided quick access to enabling/disabling Windows features and the installed updates interface. The changes have to do with the transfer of functions to the modern Configuration tool from a control panel that Microsoft considers legacy and therefore plans to eliminate or reduce it to a minimum.

Mobility Center. (Only on devices with battery). You will see it on your laptop to manage screen brightness, volume or sync profiles, as well as battery status and used mode.

Power options. Access the Startup/Shutdown and Sleep tab of the Settings tool. The latest versions of Windows 10 include a slider that enables a simple way from maximum power saving mode to maximum performance. Within the page there is a shortcut to the additional classic control panel power configurator. 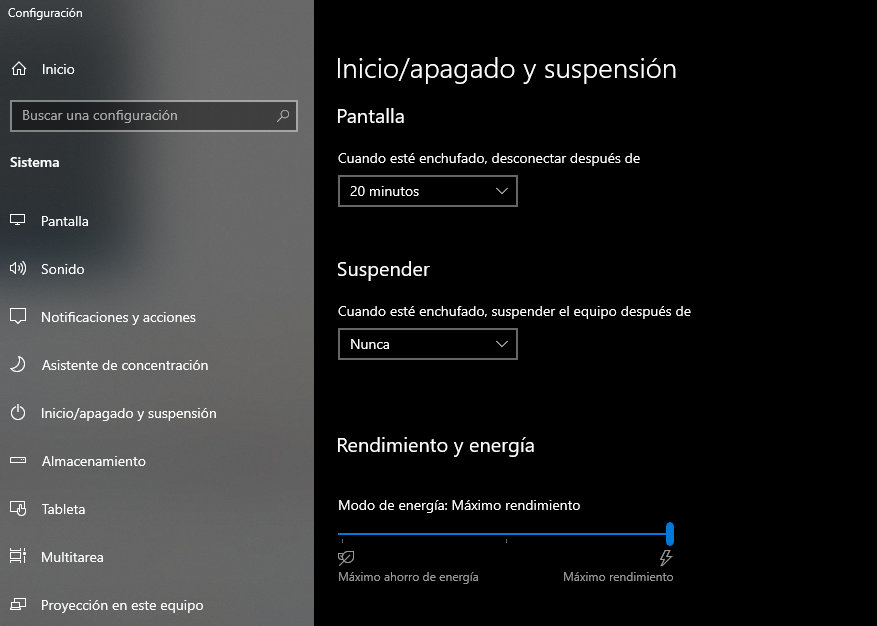 Event Viewer. A classic administrative utility of the set that includes the Microsoft Management Console (MMC), which helps find and fix Windows and application problems, including blue screens and other problems.

System. If you used to access the classic control panel, it now points to the About page of the Modern Configuration tool. It provides information about the PC, including the edition of Windows installed and the Windows Experience Index version, the activation status, as well as listing some hardware components, the processor or RAM. The same page provides shortcuts to related advanced options such as remote desktop, BitLocker or system version/activation change.

Device Manager. It is one of the few components of the advanced menu of Windows 10 that still points to the classic manager of the control panel. One of the oldest Windows utilities, it identifies each of the hardware components of the PC and shows at a glance status and assigned driver. It is one of the first places a user should visit after installing Windows to ensure that all hardware devices and peripherals are configured correctly.

Network Connections. This is one of those moved from the control panel to the general configuration tool. It reports the status of the Internet and/or local network connection, with direct access to manage the connections available on a computer, Ethernet LAN or wireless networks. You can also update the driver here, manage the Windows firewall or troubleshoot network problems.

Disk Management. Another classic MMC interface that displays the mass storage drives connected to the computer and provides tools for changing drive letters, formatting, shrinking or growing partitions, and the like. Disk Manager may seem old-fashioned but it also offers modern Windows features such as the ability to create virtual hard disks VHDs and is a must for managing storage drives and partitions.

Computer Management. Another old-school Microsoft Management Console (MMC), a container for several other tools and which could be considered as the spiritual predecessor of the new user menu we are analyzing. It includes access to the task scheduler, event viewer, shared folders, local users and groups, performance, services and device or disk manager.

Command Prompt. Access to the classic DOS-style command line interface, which allows a user to give instructions to the system using a simple line of text.

Command prompt (administrator). A version of this Windows console but with administrator privileges, allowing you to complete any task, command or instruction not only at the user level. * The command prompt can be changed to access the advanced Powershell console. 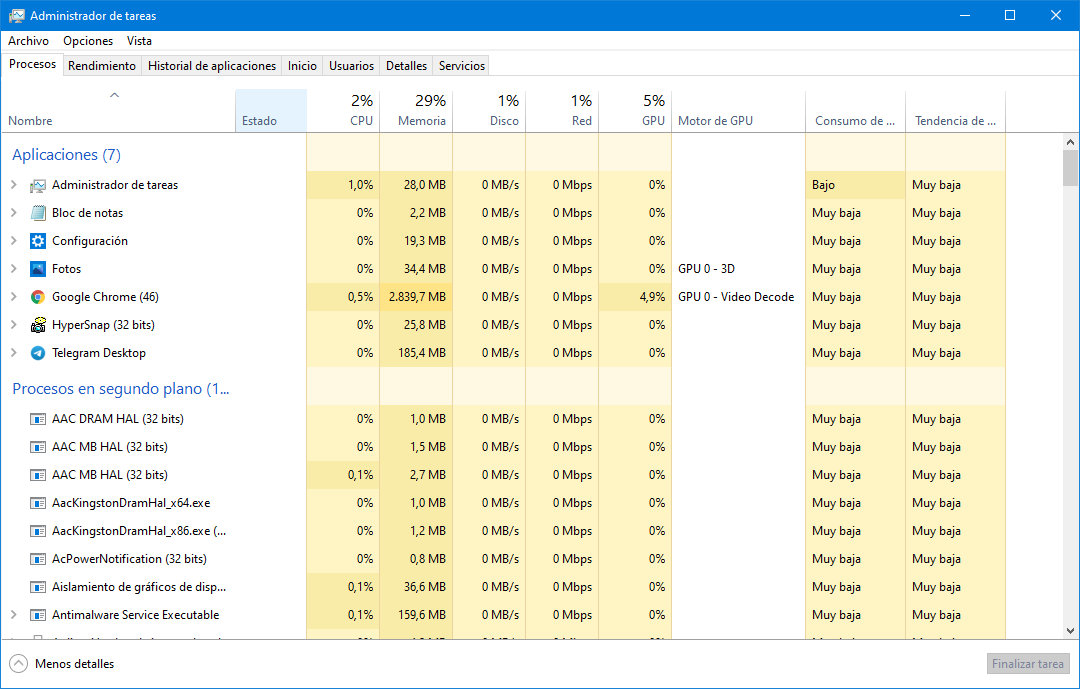 Configuration. Microsoft is not shy to show its interest in eliminating the control panel in the future and in the latest versions has replaced the access to it by replacing it directly to the modern manager.

File Explorer. Little to comment here. Access to an essential internal application to manage files and folders that Microsoft is in the process of improving because it has fallen far short of what third-party solutions offer.

Search. Provides direct access to the Windows search tool. It maintains the Modern UI style implemented in Windows 8 and is actually redundant in this menu because it is included by default next to the Start button.

Run. Another of the classic Windows tools, which provides a quick method for opening programs, managers, files, folders or Internet resource, which facilitates interaction with the computer and saves time and effort when working with Windows and its applications.

Shut down or log off. It is self-described and is currently the only item in the Windows Advanced menu that offers a submenu with four options: log off, suspend, shut down or reboot the system.

Desktop. Minimizes open applications and windows to the taskbar to show the desktop. If you click again, it recovers what you had open.

Microsoft has not made any changes to this context menu for Windows 11 so you will see it identical in functionality to the latest version of Windows 10, version 21H2. 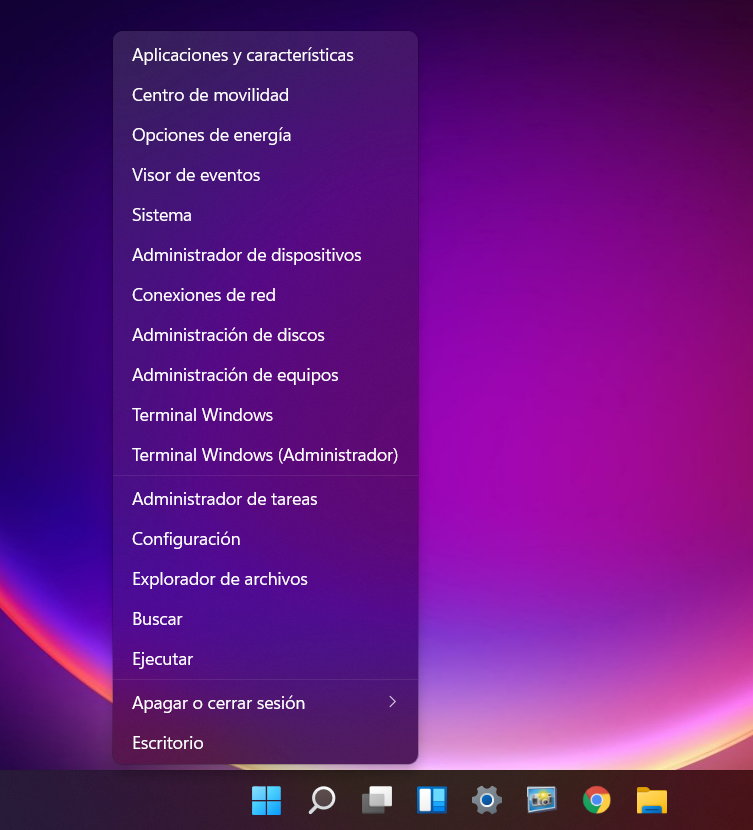 Access still occurs in the same way, by right-clicking on the Start button or by using the “Windows + X” hot keys. The few differences, in addition to the visual ones implemented in the Configuration tool, are the renaming of the two Windows console accesses, from Command Prompt to “Windows Terminal” to show the reinforcement made in this area.

Very, very useful this menu which offers shortcuts to some of the most important tools of Microsoft operating systems. There are fewer functions than there were originally and many now point to the Settings and not to the Control Panel, but it is still interesting for average and advanced users.

Finally, recommend to users who use a lot this context menu and want to customize it (something that Microsoft does not offer as in many other sections of the system) free third-party applications such as Win+X Menu Editor that do allow you to edit it, add a greater number of functions and groups, remove others or change the order in which they are presented. It worked very well until Windows 10 v1903 if you want to try it.

Parrots use the head as a limb