A new theoretical method opens the way to model the interior of the ice giants Uranus and Neptunethanks to computer simulations of the water it contains. The tool, which was developed by scientists from SISSA in Trieste and the University of California in Los Angeles and recently published in the journal Nature Communications, enables the analysis of thermal and electrical processes that take place under physical conditions that are often not experimentally reproduced leave a much simpler and cheaper approach.

In this study, experts analyzed the conduction of electricity and heat in water under extreme temperature and pressure conditions, such as those found inside huge ice planetsas well as in many Exoplanets outside the solar system. Indeed, studying the phenomena that occur beneath their surface is key to understanding the evolution of these celestial bodies, determining their ages, and elucidating the geometry and evolution of their magnetic fields.

“He hydrogen and the oxygen are the most common elements in the universe, with him helium. It is easy to deduce that water is one of the main components of many celestial bodies. Ganymede and Europa, satellites of Jupiter, and Enceladus, satellites of Saturn, have icy surfaces beneath which are oceans of water. Neptune and Uranus are probably also mainly made up of water, “explain Federico Grasselli and Stefano Baroni, first and last authors.” Our knowledge of the planetary interior “- say the scholars -” is based on the properties of the surface and the magnetic field. of the planet, which in turn are influenced by the physical properties of its internal structure such as the transport of energy, mass and charge through the inner intermediate layers. For this reason, we have developed a theoretical and computational method to calculate the thermal and electrical conductivity of water in the phases and conditions of these celestial bodies, from state-of-the-art simulations of the microscopic dynamics of a few hundred atoms to the inclusion of nature. Electron quantum without any other ad hoc approximation. By simulating the atomic scale for fractions of a nanosecond, we can understand what happened to huge masses on time scales spanning billions of years. 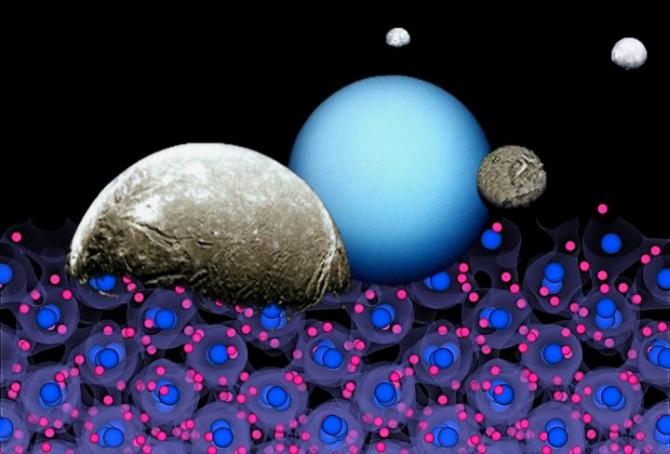 Views of the surface of Ganymede and the furrows it presents. (Photo: Federico Grasselli)

The Experts analyzed three different water phases:: Ice, liquid and superionicunder the extreme temperature and pressure conditions typical of the inner layers of these planets. Grasselli and Baroni explain: “Under such exotic physical conditions we cannot think of ice as we are used to. Even water is actually different, more dense, with different molecules dissociated into positive and negative ions and thus carrying an electrical charge. Superionic Water is somewhere between the liquid and the solid phase: the oxygen atoms of the H2O molecule are arranged in a crystal lattice, while the hydrogen atoms diffuse freely like in a charged liquid. “The study of the thermal and electrical currents that carry water to these three different ones Species generated is important to shed light on many unresolved issues.

The two scientists also state that “internal electrical currents are the basis of the planet’s magnetic field. If we understand how the former flow, we can learn much more about the latter.” And not only that. “The coefficients of thermal and electrical transport determine the history of the planet, how and when it was formed, how it cooled, so it is important to analyze them with the right tools, how we evolved them. In particular The conduction properties of The Heat resulting from our study suggests that the Existence of a frozen core it could explain the unusually low luminosity of Uranus due to the extremely low heat flow from its interior to the surface. “

In addition, the electrical conductivity found for the superionic phase is much higher than assumed in previous models of magnetic field generation on Uranus and Neptune. Since superionic water is believed to dominate the dense, slow planetary layers that lie below the area of ​​convective fluid where its magnetic field is created, these new findings could have a major impact on studying the geometry and evolution of the magnetic fields of the two Planets. (Source: NCYT amazement)