The introduction of the Ryzen 5000 processors did not leave anyone indifferent. When AMD introduced this new generation and announced the changes that the Zen 3 architecture would bring, it left us A fantastic promise: Up to 19% improvement in CPI compared to the previous generation i.e. Zen 2, although this was not the only interesting novelty.

Those who read us every day You already know the most important changes That introduces Zen 3. For newbies and also for those who have bad memories, I invite you to read this article devoted to this architecture.

The central pillar that made this huge increase in the CPI possible is a strange approximation to a monolithic partial core design. Don’t get me wrong, Zen 3 and thus the Ryzen 5000, Maintain MCM approach That’s what we saw in Zen 2, which means the chiplet (CCD unit) is still in place and that it shares the spotlight with an I / O chip that contains all of the interconnecting elements including the memory controller.

But still, Zen 3 reverses the design of two CCX units with four cores and 16 MB L3 per CCD and bet on a single block with eight cores and 32MB L3This makes communication between cores easier, reduces latency, simplifies workload distribution and allows each core to access the full 32MB of L3.

It sounds good on paper, but the comparisons published by reputable media don’t quite show values ​​by which we can clearly see whether AMD really increased the IPC that much. Fortunately, they surprised us at HardwareUnboxed with a very interesting and perfectly executed comparison in which they analyze the performance of the Ryzen 7 1800X, Ryzen 7 2700X, Ryzen 7 3800X, Ryzen 7 5800X and Core i7 10700K, four processors adding 8 cores and 16 threads and having a completely different IPC. 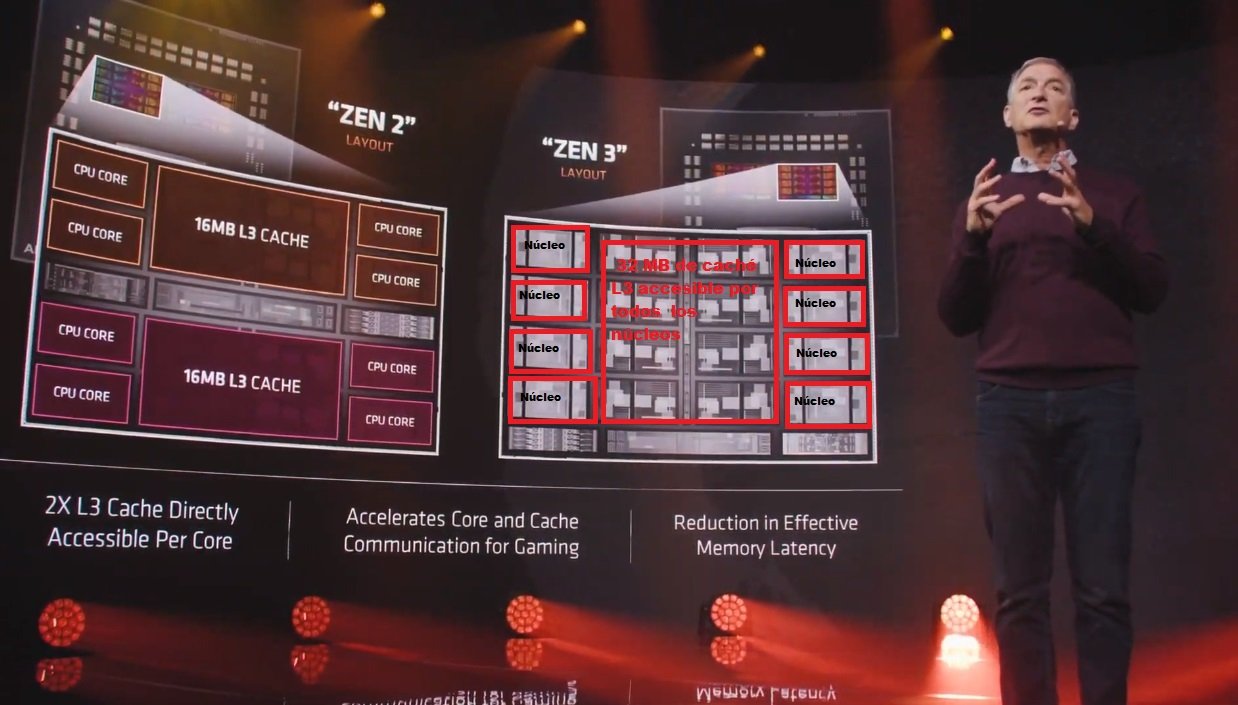 To optimize the results and realistically show the IPC improvements of each chip, All models are set to a frequency of 4 GHzA value that, as we told you at the time of analyzing the Ryzen 7 1800X, is the maximum that the processor can achieve in a stable manner without having to input unwanted voltages.

Before we see the results, let’s review them concrete specifications from each processor to have a clearer view of the differences they represent.

This is without a doubt the conclusion we can draw from comparing HardwareUnboxed. This is achieved by using processors with the same number of cores and threads configured at 4 GHz a situation of equality among them This can only be broken by the difference in terms of the CPI.

When we look at the Ryzen 7 1800X, we see that still a very capable chipand that it offers an excellent level of performance, although it will be in the market for four years soon. For its part, the Ryzen 7 2700X is slightly above it, a result that confirms what we told you at the time of our analysis and that Zen + represents a slight increase in CPI compared to Zen (between 2% and 4%). It’s strange to see that, however The Ryzen 7 2700X loses in some tests.

The Ryzen 7 3800X confirms what we all know about this architecture Zen 2 was a huge step up from Zen +although it was not enough to completely outperform Intel. On the other hand, the Ryzen 7 5800X, which is representative of the Ryzen 5000 series from AMD in this comparison, makes it clear that the Sunnyvale giant has finally overwhelmed Intel. 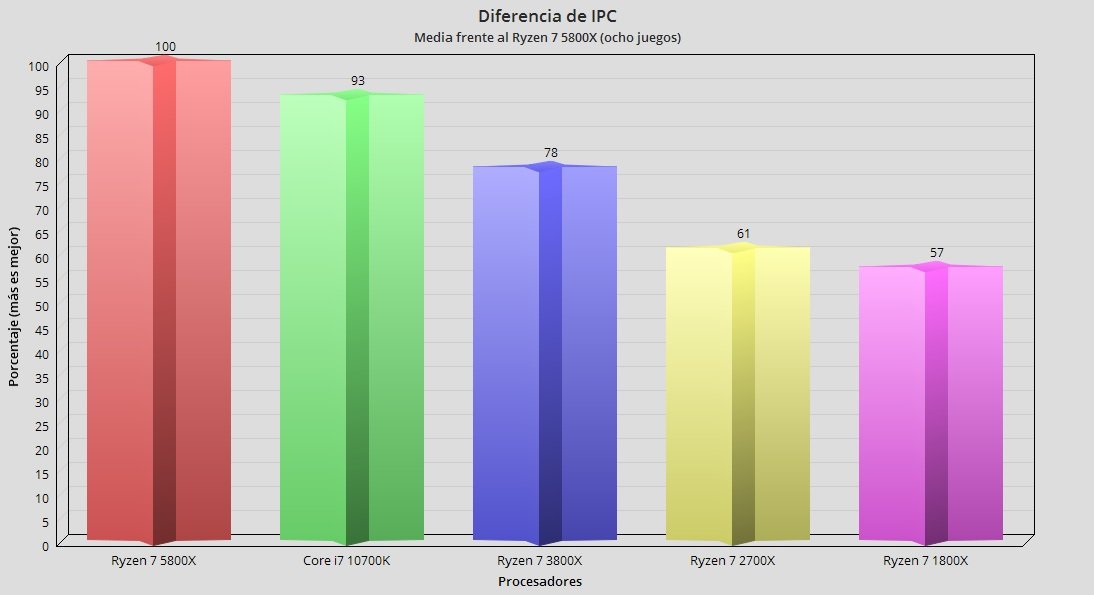 In the attached graphic you can see the percentage difference in relation to the CPI that exists between all processors in comparison. On average, the Ryzen 5000 series did: 22% improvement in CPI over Ryzen 3000 series while gaming (We start with the 8 games tested by HardwareUnboxed). If we compare the Ryzen 5000 series with the 10th generation core, we see that the difference is small. The CPI improved by around 7%.

When we finally look at the evolution that the Ryzen 5000 has marked compared to the Ryzen 1000, we will see that the difference has been enormous since then The CPI of the Ryzen 7 5800X is on average 43% higher than that of the Ryzen 7 1800X. Doesn’t it impress you? Remember, AMD managed to improve the IPC of its processors by 43% in just over three and a half years.

The whole problem of performance improvement and the CPI is clear to us. If you want to learn more about synthetic performance tests and professional applications, I invite you to watch the HardwareUnboxed video as it is very graphic and easy to understand even if you are not good at English. Before I finish, I want to make a special mention of the consumption, as the Ryzen 7 5800X not only consumes less than the Core i7 10700K but is also more efficient than the Ryzen 7 3800X, which confirms this Zen 3 is a more powerful architecture with better performance per watt consumed.

What memory do I need to accompany a Ryzen 5000?

This is one of the most prominent questions after the AMD Ryzen 5000 launches. As many of our readers know, all current processors have more or less more considerable dependence on the RAM speed and its configuration to achieve its full potential. We already had the chance to talk about this in our last RAM guide.

The Ryzen are no exception to this rule, in fact, they are just the opposite. The difference in performance that we can see when using memory at 2666 MHz or less is very large. Hence, we need to be very careful with the configuration that we provide as we may end up creating slow memories a big bottleneck.

With the Ryzen 5000, which is based on Zen 3, we can use memories with higher frequencies. But where is the sweet spot in terms of performance per euro invested? As we can see in the attached graphic, the difference between using a 4,000 MHz DDR4 kit and assembling a DDR4 kit at 3,600 MHz is is practically zero, and there isn’t much of a difference in using a 3200 MHz RAM memory kit.

When we introduce selling price into the equation, the conclusion is clear from a rigorous perspective The best value in terms of performance per euro invested is achieved with DDR4 memory kits with 3,600 MHz, since we can find 16 GB packs (2 x 8 GB) from 70 euros, while the DDR4 kits start at 3200 MHz from 66 euros. If we wanted to assemble a kit with the same capacity at 4,000 MHz, we would have to invest more than 130 euros and of course it’s not worth it as it would mean twice as much to get an average improvement of 2%.

Before I finish, I want to remind you of something very important and these are the results that we will take for referenceAverage values ​​in games with very uneven CPU dependency. In the comparison, we included titles like Red Dead Redemption 2, which have a very low dependency on the CPU, and others like Assassin’s Creed Odyssey and Shadow of the Tomb Raider, which have a much higher dependency on the CPU. With these, of course, the speed of the RAM makes a slightly bigger difference, but it is still minimal.

You don’t need a high-end RAM memory kit to mount a Ryzen 5000. You don’t have to invest more than 100 euros in this component to get the most out of ityou can easily start with kits between 66 and 70 euros. This applies not only to the Ryzen 5000, but also to the Ryzen 3000 series. So keep that in mind.