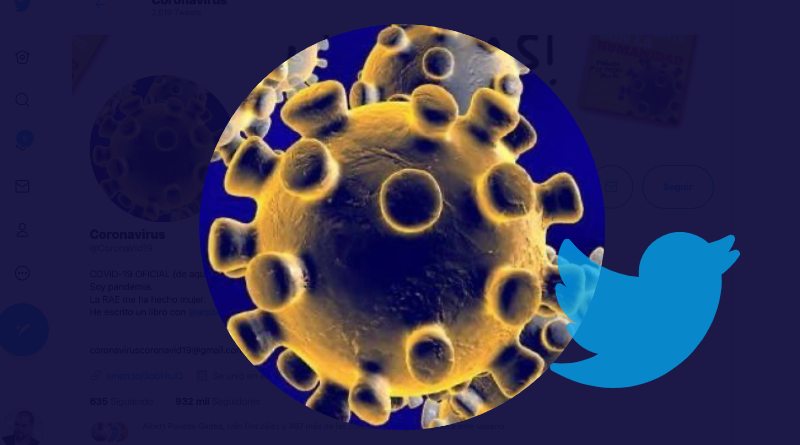 INTERVIEW with the coronavirus from Twitter. He opened his Twitter account two months before the state of alarm was declared, when the coronavirus was already raging in China and crooked in the West @ CoronaVid19, the first profile of a virus previously known on a social network.

After its “viral” success, thousands of imitators appeared, but none of the variants and resulting strains have had such an impact that they already have a million followers on Twitter or even write a book: “How to end humanity in secret, ”published by Arpa Editores.

Aware that there are more than 500,000 vaccines being given a day “we are going to have him expelled very soon,” we spoke to him to find out what his future plans are if he is considering switching to another social network. Things are coming“But we’ll see,” he tells us.

-Hi Coronavirus, I have a little respect for you … could this interview be viewed as a risk exposure?

– Without a doubt, that is approaching me. Also, I’m starting to be desperate, things don’t look good to me.

-Then do I put on the mask, better the hygiene or the FFP2?

-They say the FPP2 protects more. When there is no distance it is useful to you, when you are far it seems nothing would happen. Although they almost make you wear the mask even in the most remote places in the world.

-Let’s cause trouble. How social networks have changed our lives … Now even viruses have Twitter. How did you get your profile?

– Most decisions are impulsive. We don’t rethink it. Twitter is a site full of talent, at least I think so. I’m a fan of a lot of people who are really wonderful. I always wanted to have an original and different account, why not be the first virus in history with social networks? When I performed in Italy I thought it was a good cover letter. No virus tells its wanderings through life, it seems like it was a good idea.

– Almost a million followers and rising … did you ever think that you would be so successful?

– No, I believe that the success of things cannot be predicted. Rare. Responses on social media are unpredictable. The initial distance from the actual danger influenced their acceptance. Then it is a pleasure to manage a virgin character. You can create content without worrying about doing something similar to what others would do. There is a lot of play and freedom.

-The first key I would say is originality. What I told you, viruses didn’t talk on social media. That alone shocked people. Then I think the fact that it is tied to the present is also important. Being among the first to comment on something gives him an important point.

The fact that the pandemic was media coverage also gave the character visibility. It’s a number of things, I suppose, ingenuity and creativity influenced something too.

-How has Twitter changed your life? What’s the best thing that happened to you on this social network?

-Just the fact that you have had the opportunity to write a book is already a change. Perhaps there will be more things in the not too distant future, but we’ll see. Otherwise, it hasn’t changed me excessively, I don’t live on Twitter.

The best thing is to see that there are people out there who enjoy reading what you write. I signed books on Sant Jordi’s day and people thanked me for making the pandemic more bearable. This is without a doubt the most rewarding thing.

-And the worst? Because not everyone understands humor in this social network …

-The worst part is the usual political polarization that leads people to believe that they can tell you what to do. Nothing new. As if your ideas weren’t serious.

-How did you get the idea to publish a book?

-Yes, they wrote to me from the publisher to suggest doing it. They told me that something had to be done. We found it interesting to talk about the history of other pandemics in a humorous tone and from their point of view. Pandemics are a law of nature, it should be taken into account so as not to repeat mistakes that have already been made.

– Should we wash our hands before touching them?

-Of course not, I’m also the first author who can’t wait for the more people borrowed his book to be, the better. You need to run your tongue over your finger before turning the page. These droplets give me life.

-Can a mutation occur and the coronavirus jump to other social networks?

-In Instagram, I am already adjusting the content that I have posted on Twitter. I don’t see myself on TikTok because it would be unsightly to see a spherical virus dance. I don’t think it was very successful.

Still, nothing is ruled out, not even a mutation, if you sneak up on me. Nothing is thought out or ruled out, although appearing on other networks as my death nears doesn’t feed into my plans.

-What do you think of the anti-vaccines?

Anti-vaccines do what every virus wants. They promote a discourse that makes them allies. Thanks to them, viruses such as measles reappear. The anti-vaccine discourse is actually creeping in because the background is very honest, the cause is beyond doubt. It’s the same thing that science promotes.

They say they are not vaccinated for their health because vaccines are bad. And that’s how they convince others. Of course, it is difficult for someone to endorse your suggestions without an honest reason. The key is that they lack scientific accuracy. That’s why I like them a lot because they go against science.

-What are your future projects?

Well I don’t think about it much, I like Carpe Diem a lot. My situation is not enough to make many plans. However, it seems that you can start making a plan in yours. It seems that with half a million vaccinations a day you will be phasing me out very soon. I prefer not to really think about it.