The SD memory cards met the first 20 years since their commercialization a few weeks ago and are still very necessary especially in its microSD format, the smallest and most sold of this standard that offers solutions external and removable storage For almost any device.

The microSDs spread over millions of devices, including smart phones, although there are models and manufacturers that no longer support them by increasing their internal storage capacity. Its versatility, its low cost, its capacity in a tremendously reduced size, are some of the advantages so that these solutions are present in so many devices, from cameras, tablets, computers, GPS, portable consoles and a very long etc.

And not only to use them as a data file but to run applications or even operating systems. An important standard to which today we dedicate the update of a buying guide where we select the best offers available and review those factors that users have to take into account for their acquisition. 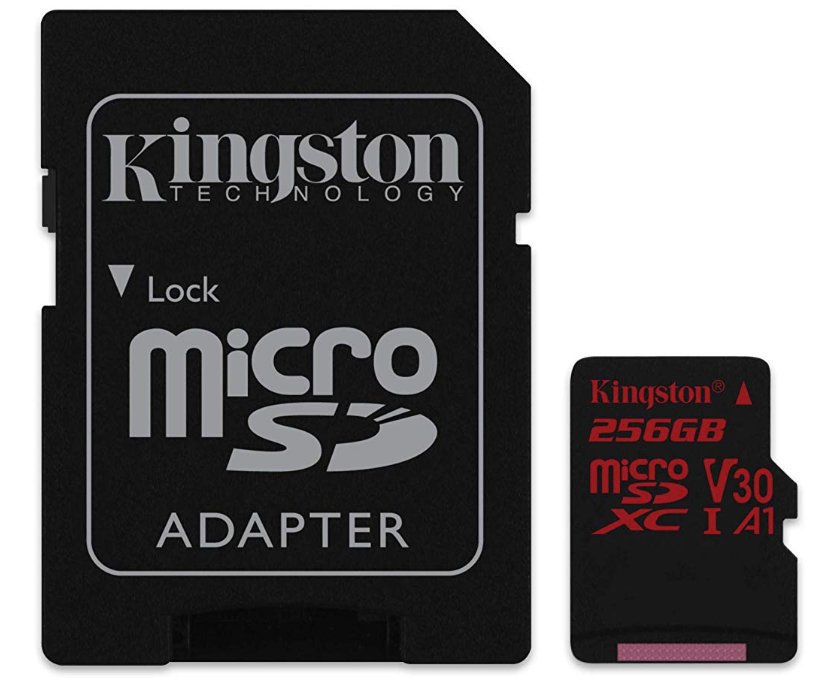 Formats and performance in microSD

Although they may seem at first sight, not all cards are the same or compatible with all devices, which we should value at the time of purchase. The same formats as standard SD cards are those in which microSDs are divided, with the following main characteristics:

When choosing the card we also have to take into account that the performance is sufficient for the use to which we will allocate it. Fortunately it is easy to distinguish based on numbers inserted in a semicircle that designate the "Class". It must come printed on all the cards we buy:

It is worth knowing that these numbers do not designate the real or maximum performance but the minimum speed in Megabytes per second than in write mode It is capable of supporting the card. Although it is not usual, it is technically possible that the maximum reading speed of a Class 2 card exceeds a Class 4. In order not to get involved, always try to choose Class 10 but also try to know the maximum reading speed. The minimum supported write speed of each class is:

Another value to be assessed is the maximum speed that microSD can reach in data transfer. Complicates the choice of a consumer, but had to be implemented to meet the needs of new applications such as 4K recording. It is about the specification Ultra High Speed (UHS) and has two versions:

This data defines the maximum card reading speed and how the rest of the values ​​must be printed on the memory cards that "I" for UHS-I or "II" for UHS-II.

Like the previous ones referred to the Class, each card that supports this format must also include printed the minimum writing speed supported, in this case the numbers 1 or 3 inserted in a U, as you will see in the image:

As for the minimum speed in writing is the following:

The last novelty to know in this section is the norm microSD A2, which offers a great performance jump especially at random speeds. The microSD A2 are certified with the App Performance 2 specification and use the UHS-I bus. Random speeds do not offer a significant improvement over A1, but in sequential readings / writes, which should significantly improve the use of applications in the devices where they are included.

Their main advantage over the “A1” standard is that they quadruple the minimum in random readings / writes (4,000 / 2,000 IOPS) and offer data transfers of up to 100 Mbytes per second. They are sold in several capacities, from 32 Gbytes to versions with 1 Tbyte.

Most manufacturers cite the maximum speed in read mode that their cards are capable of reaching. The speeds are based on internal tests of the manufacturer so in most cases in real test they will be somewhat more discreet. Still it can serve as a reference. It is indicated in MB / s and it is indicated in the advertisement of the card, in the technical manual of the card or in the card envelope.

Finally, point out the "relative speed." Years ago some manufacturers used the original transfer speed in formats such as the CD (150 KBps) and some microSD providers used it to show the speed of the card. Thus, we could see something like "2x", 4x "and so on. A "100x" would correspond to a speed of 15 MBps. Except Lexar, they are not usually used, but in case you run into someone you know what is going on. It is not mandatory to use this speed data as it is to indicate the format and the class we saw above. 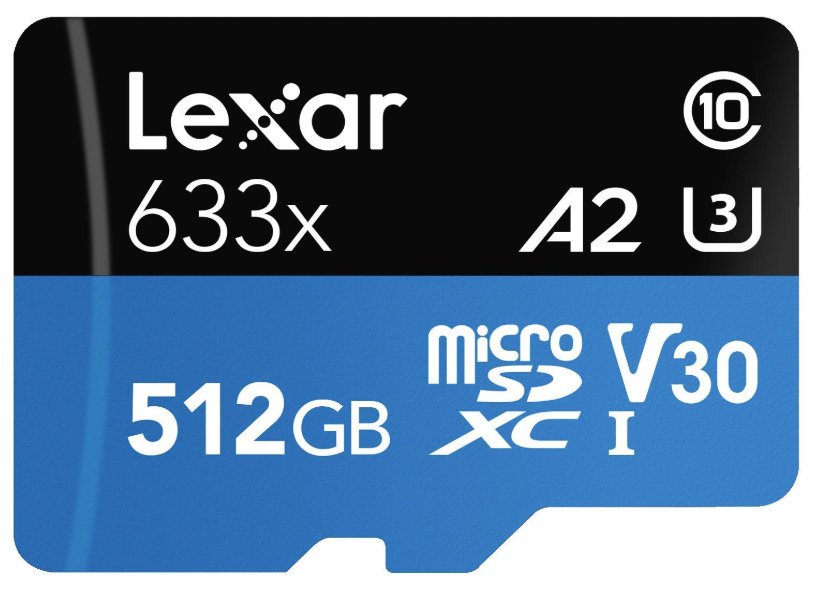 The future of microSD passes through SD Express

The great novelty for the future of microSD was announced last summer and is called SD Express, a new standard that will take external and removable cards to another level in performance and capacity. The new version, SD Express (SD 7.0 standard), hopes to raise the standard to a new level using the PCIe 3.0 interface and the NVMe v1.3 protocol, which are used by other storage products such as SSDs. Under PCIe, an SD Express will achieve superlative data transfer throughput of up to 985 Mbytes per second in read mode.

In addition, the maximum storage capacity on SD memory cards grows from 2TB with SDXC at 128 Tbytes that you can offer as a maximum capacity the new SD Express Ultra Capacity (SDUC). The new SD Express cards will initially be offered in SDUC, SDXC and SDHC formats. They are already being tested by manufacturers, but we still do not know release date, models and prices.

What memory card do I buy?

As always, it will depend on your needs. In Storage capacity, the current minimum for any user should be 16 Gbytes. Do not buy anything lower if your device supports it because it is not worth the price. In addition, they tend to be slower. From there, for consumption, there are models with 16, 32, 64, 128 or 512 Gbytes.

The great novelty of the last months has been the arrival of the new models of 1 Tbyte. An impressive capacity for such a small size, but forcing you to pay an extra price. Even amateur or professional photographers who may need such a large capacity, prefer to buy several cards of smaller size that apart from the cost allow to safeguard a part of the shots in case of failure of the unit. There are models available from various manufacturers such as Lexar, SanDisk, WD or Micron.

As for the performance, it will depend a lot on the device where you use it. It has nothing to do with its use in a GPS where we need to extend the storage and little else, than if we use it to run applications from it or in a camera for video recording that demands the fastest cards in the market. We always use the following Panasonic image because it is a good guide to the needs for 4K video in consumption. 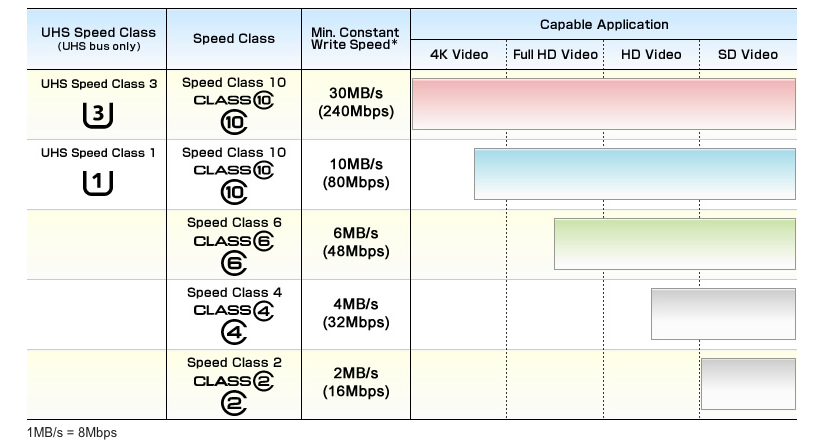 Finally, point out the group of resistant microSD. Especially dedicated to professionals or users who need high durability memory cards, there are some specialized series to offer maximum resistance, protection against water, dust or X-rays of airports, in addition to including data recovery software.

All major brands specializing in external and removable storage offer high reliability, speeds above the minimum established and good support, up to a lifetime warranty on the best models. Almost all of them usually include an adapter for use in SD slots like those we have on personal computers. And they can even be connected to USB ports with the corresponding adapter. 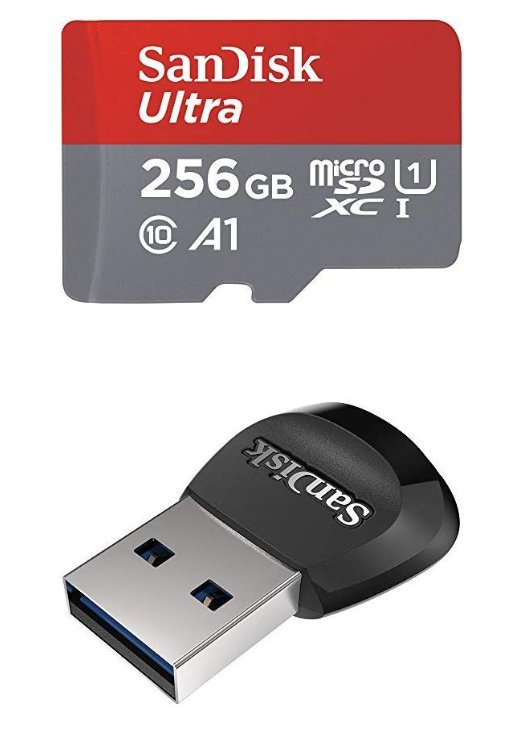 Like other solutions that depend on NAND flash drives such as SSDs, these microSD have dropped in price in the last semester of 2019 and the truth is that today they have a price available to all users up to 256 GB capacities. The trend is expected to change in 2020. If you have to buy, don't expect too much. The offer is very wide and varies according to performance and capacity. We select the most representative series of the segment, the main manufacturers and the most used capacities in the consumer market.

Capacity up to 64 GB