In Spain there are about thirty digital content platforms, from generalist ones (Netflix, HBO, Prime Vídeo, among others) to many other specialized and niche ones, which offer users all kinds of movies, series and TV channels in streaming.

For a long time, Netflix was the undisputed leader since, in addition to having a great offer of movies and series, it was the first platform to reach the national market. However, now that times are hard for the company -which is experiencing a worldwide loss of users- Netflix is holding its own at least in Spain, where it still has the largest market share, although its competitors are closing the gap.

In the first quarter of 2022, Netflix has managed to maintain 24% market share in Spain and be the first streaming platform in terms of users in the country. In fact, according to JusWatch, it has even grown by 1% in this period.

That same percentage has dropped its immediate competitor, Amazon Prime Video, which now holds 20% of the national market. In third position is Disney Plus, a platform that has been in the country for little more than two years but already has a 16% market share, surpassing the traditional third player, HBO.

Now reconverted into HBO Max, this platform, which has a 15% market share after facing a difficult reorganization of its business that has confused many users in the country, has fallen to fourth position. 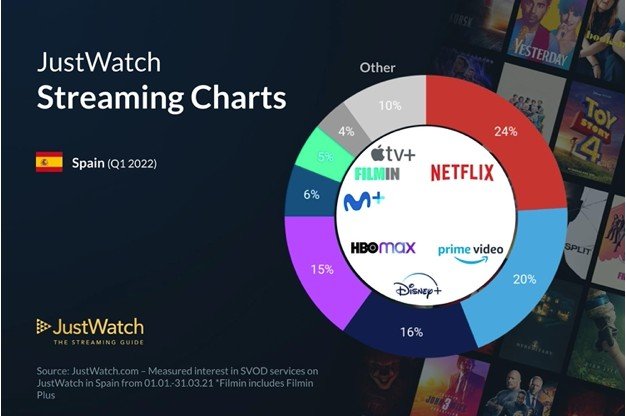 For its part, Movistar Plus, Telefónica’s digital content platform, has 6% of the market, while the national company Filmin has 5% of the national market of subscribers to audiovisual content.

Apple TV has a lower percentage, with 4% of subscribers, while the rest of the platforms -to complete the thirty that market their services in the country- share up to 10% of the market.

The passenger who saved a plane

How to strengthen passwords on World Day 2022