PCI Express is a Local input / output bus fundamental in the current architecture of computers. It is mostly used for graphic card communication and can also be used to connect network, sound and storage components to install the fastest SSDs on the market replacing hard drives and SATA solid state drives.

PCI Express (which you will see abbreviated as “PCI-E” or “PCIe”) is used both for internal connection in the integrated circuits of the motherboards (chipsets) and to connect external cards punctured in the corresponding slots. The most widespread version is currently v3.0, although v4 and v5 are on the way – with delays on schedule – they will increase their performance and turn this standard into single bus for the PC of the future. We review the characteristics of this interface, the existing types and their future.

Where does PCI Express come from?

The PCI Express standard is the responsibility of the “PCI Special Interest Group”(PCI-GIS), an organization of 750 members where all the greats of the technology industry are represented, which set the goal of developing a unique standard that would replace previous buses such as ISA, AGP or the same PCI on which it is based.

PCIe offers a fundamental advantage over PCI as it is structured as point-to-point, full-duplex lanes, working in series. Basically, each individual PCIe port and its installed cards (or each can obtain maximum bus performance, compared to the slowest and most saturated PCI when the device assembles multiple connectors.

PCIe has gone through multiple revisions, but they all have a common denominator, they use the same physical connections that you will see in four primary sizes called x1, x4, x8 and x16. There are also x32 ports, but they are extremely rare and usually are not seen in consumer hardware.

The different physical sizes allow moving different amounts of connections and simultaneous data to the motherboard. The larger the port, the greater its maximum capacity. These connections are colloquially known as "lines" or "lanes", where each PCI-E lane is composed of two signaling pairs, one for sending data and the other for receiving. In practice, the greater number of lanes allows to gain in performance and capacity and the data will be able to flow faster between the peripheral and the rest of the computer system.

In version 3.0 of PCI Express, the theoretical maximum performance per line is 8 GT / s, which in practice translates to slightly less than 1 Gbyte per second per lane. Not all devices need the same capacity and although there are no established guidelines on what type of slot to use, we can point out some practical examples of its use.

For a common sound card or Wi-Fi, a PCI-E x1 is sufficient, while a high-end network card, RAID controllers or USB 3 expanders, use the x4 or x8. Graphics cards usually use x16 to have maximum transfer capacity. SSDs in M.2 format for PCIe are usually connected to x4 ports, but everything indicates that it will be small in future generations.

Considerations to consider in PCIe types and lanes

One of the parts of the PCI-E configuration that can confuse a consumer is that an x16-sized port may not offer the maximum lanes allowed by the standard. The explanation is that while PCI-E can accommodate individual connections in unlimited quantities, there is a practical limit on the chipset performance of the board.

This leads us to a conclusion that you surely know: not all motherboards are the same. The economic range can have x16 slots but whose performance is equivalent to x8 for example. High-end boards for PCs dedicated to professional games or workstations, usually have several x16 slots that in addition to size take full advantage of the performance and bandwidth allowed by the standard.

If you place a high-end graphic (especially in SLI or Crossfire multi-graphic systems) in a slot that – although it has a size x16 – does not offer the maximum of lines, you can have a bottleneck and don't get your maximum performance. Another aspect to consider is that many boards with 2 x16 slots only offer the maximum of lines if you use one of them, going down to x8 if you use the two together.

Comment that smaller x1 and x4 cards can be installed at x8 and x16 (obviously not the other way around). In addition, some x8 have a set of different pins and cannot be installed in x16 slots.

The future of PCI Express

PCI Express 3.0 is available since 2010 and since then the needs of the industry have increased especially in the graphic market, but also in other applications with large workloads and bandwidth such as technologies related to artificial intelligence.

Therefore, the PCI-SIG consortium announced last year the final specifications of the next generation PCI Express Gen 4.0. It will offer higher performance than the current PCIe 3.0, increasing the number of channels through which the signal passes to double bandwidth Up to 16 Gigatransferences per second. 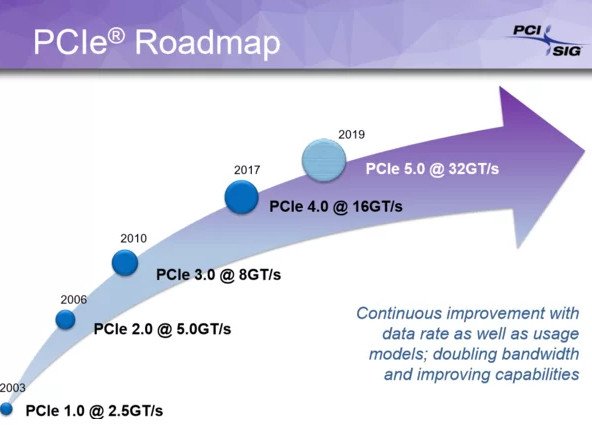 It will also offer lower latency, higher RAS capabilities, improved I / O virtualization, to address the increased needs of the industry in the graphic market with truly photorealistic video games and in professional applications. Another improvement will come from smaller physical size of the bus, which will allow smaller cards and not the monstrous sizes that we can find – for example – in today's high-end dedicated graphics.

The initial forecasts for its implementation have not been met and will finally arrive quite late. The first products under PCI-Express Gen 4.0 would not be available until 2019. And we'll see it. As a result of the above, the next version, PCIe Gen 5.0, which will once again offer a performance increase substantial, using a frequency of 32 GHz to reach a bandwidth of 128 GB / s in full duplex, doubling that of PCI Express 4.0 and in turn quadrupling that of PCI Express 3.0. 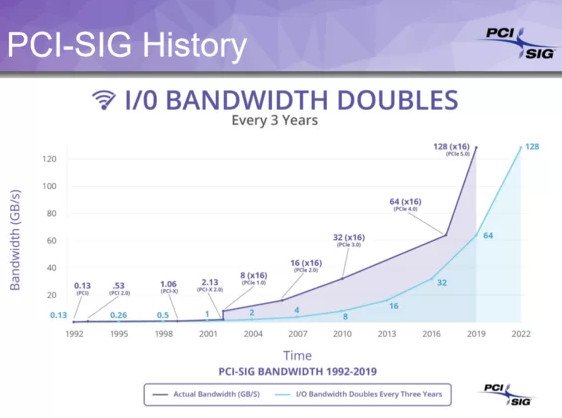 Very late, there is no date for your arrival. The group explains «For the stagnation of the PC market»but the truth is that facilitate the construction of motherboards by using a single type of bus for everything, replacing legacy interfaces including SATA-based storage devices, both on on-board slots or in other formats such as M.2 that take advantage of the high speed of PCIe.

What is a hard fork and why do some cryptocurrencies share a name?