Researchers from the Milà Institution and the Fontanals de Investigación en Humanidades of the CSIC (Spain) examine the knives and other stone tools found in the Nahal Hemar Cave in what is now Israel and conclude that they were used to dismember bodies . The knives were deliberately placed in the cave and were part of the ritual practices that took place during the pre-ceramic Neolithic B around 8,000 BC. Were carried out in it. The study sheds light on the instruments used in ritual practices 10,000 years ago and the connection with the deceased in the new religiosity that emerged during the Neolithic.

Examination of the lithic artifacts found in the cave of Nahal Hemar, modern-day Israel, provides new archaeological evidence of their use during the burial rituals that were performed there in the Neolithic. A work by researchers from the Instituto Milà and the Fontanals de Investigación en Humanidades del CSIC, published in Quaternary International, has analyzed the knives and other lithic tools in the cave, the markings of which indicate their use in the dismemberment of human bodies.

The cave was excavated in 1983 and to this day remains a unique site and one of the most enigmatic Neolithic sites in the Middle East. Inside, the cranial remains of 23 people were found, as well as a variety of extraordinary items such as masks, necklaces, human figures, sculptures and, thanks to the extreme aridity of the environment, well-preserved remains of fabrics and wooden objects.

The presence of these unique artifacts caused the excavators to interpret the Nahal Hemar Cave as a cave for ritual purposes. More than 600 stone tools were also recovered at the site, including the largest concentration of Nahal Hemar knives (denoted by two notches on the base) from the Middle East, although it was not possible to determine the function for which at the time they served. Now a CSIC team has taken part in a new analysis of the collection. 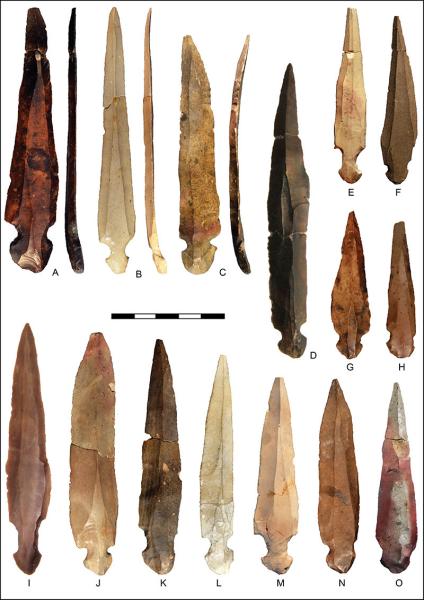 “We set out to conduct an updated study of the stone tools found in the cave, combining a technotypical approach with the most advanced techniques of examining signs of use to find out how they were made and what their function was. these tools, ”explains Ferran Borrell, researcher at the Milà and Fontanals Institute for Humanities Research (IWF-CSIC).

More than 200 whole slabs of flint have been recovered in Nahal Hemar, almost half of which were converted into Nahal Hemar-type knives. Microscopic analysis of the edges of these blades and knives has made it possible to determine that a large proportion of them were used in dismemberment, including cutting meat and making contact with bone and cartilage. Juan José Ibáñez of the IMF-CSIC and co-author of the study points out that “we can interpret this taking into account the particular context in which the tools examined appear and the presence of the remains of 23 people and a large amount of ritual implements from Nahal Hemars Knives are related to human remains and may have been used for dismemberment activities. “

It is known that in the Middle East during the pre-ceramic Neolithic B (Middle and Neolithic about 10,000 years ago) ritual practices were varied. In some areas and locations, the deceased were usually buried in houses, while in other regions the extraction, handling and relocation of skeletal remains was common. For example, the practice of extracting the skull and then covering it with lime mortar that reproduces human features (nose, ears, eyes and mouth) is known. These manipulation, disarticulation, and meat practices often left cuts on the bones themselves and have been identified with increasing frequency in anthropological studies. However, never before has anyone thought about the tools (necessarily knives) with which these tasks would have been carried out.

“It is the first time that thought has been given to the tools that could be used to carry out such activities, and as far as Nahal Hemar is concerned, it can be confirmed that the tools found were not offerings or trousseau, but items that participated in the rituals performed, “indicates Ferran Borrell.

“Such a deposit provides a lot of information and leaves a lot of questions unanswered,” explains Juan José Ibáñez. “What these rituals consisted of, who took part and what they meant are questions that still need to be clarified, although some of them may be answered if all the objects recovered are re-examined,” the archaeologist lists.

The CSIC team was also able to determine who was making the lithic tools as there were doubts whether they were groups of hunter-gatherers south of Nahal Hemar or farming communities to the north. “Because of the technology, we believe that the materials had to be made by farming villages and that the cave was therefore used by these communities,” adds Ferran Borrell.

The study sheds light on the richness and diversity of burial practices and ritual uses of caves in the early days of agriculture in the Middle East, which have always been elusive in archeology.

This research was supported by the Ministry of Science and Innovation, the Archaeological Foundation Levi Sala CARE and the Center de Recherche Français à Jérusalem. (Source: CSIC)

The deepest shipwreck in the world