New research done on feathered dinosaurs and the earliest birds revised the evolutionary relationships of dinosaurs in the origins of birds. An international research team led by Professors Michael Pittman and Rui Pei from the University of Hong Kong from five different countries, including Professor Hans Larsson from McGill University. published their results in the journal Current Biology.

The team carefully examined the fossils, developed a novel analytical system to find evolutionary trees, and estimated how each species might have exceeded the strict thresholds of an unplanned flight.

“Our revised evolution tree supports the traditional relationship of Dromaeosaurs (“Birds of prey”) and troodontic theropods as closest relatives of birds. It also supports the controversial status of the anchiornithin theropods as first birds, “Pei said. Using this improved evolutionary tree, the team reconstructed the potential of avian-like theropods for an unplanned flight.

The team found that the potential for flight under wing impulses developed at least three times in theropods: once in birds and twice in dromaeosaurs. “The soaring ability of some dromaeosaurs is well established so it is really exciting to find at least two potential sources of wing-lift flight among dromaeosaurs,” said Pittman. 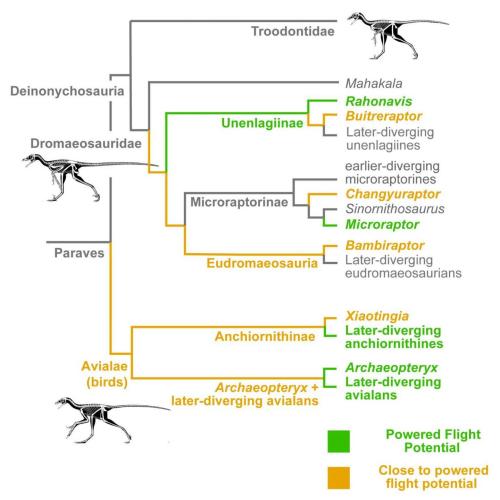 The team found that theropods developed at least three times the potential for powered flight: once in birds and twice in dromaeosaurs. (Photo: Julius Csotonyi)

“It’s been a fun collaboration for several years,” commented Larsson. “For the first time, we have a well-resolved evolutionary tree of these little feathered dinosaurs that we can use to ask questions about how birds came into being. We were able to draw the biomechanical boundaries of all these species and create a picture of experimentation within a range of skills from close-range flight to to full flight in these wonderful little carnivores. ”This contradicts the simple, linear evolutionary model of bird origin, and instead depicts one in which large numbers of feathered dinosaurs experimented with many types of wing-assisted locomotion. I think this is the most realistic view of the origins of the birds to date. “(Source: NCYT amazement)

How to improve the SEO of a website’s JavaScript content