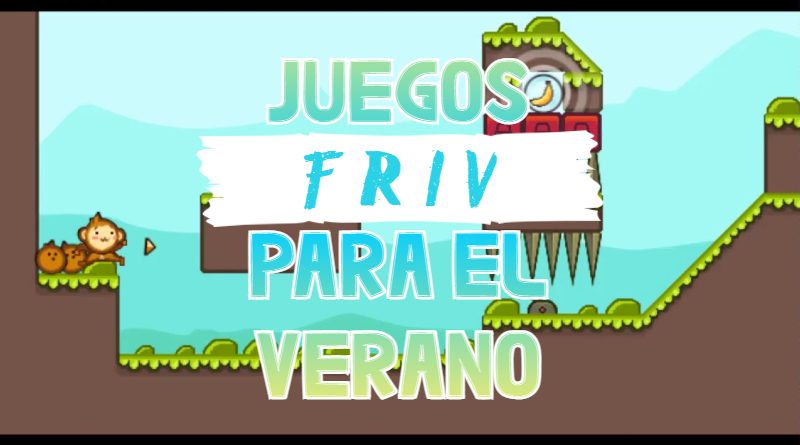 FRIV games have a number of their own characteristics that can be used to define them. What is striking among them is that it is them simple games, programmed in Flash, free of charge and can be played directly in the browser, as well as on mobile phones or desktop computers by downloading the game.

FRIV games are free games with a simple and addicting mechanic that tends to mimic the great games of all genres.

– “Banana Mania”: A game as easy as it is addicting. Two gorillas appear on the screen and the player controls an arrow that shoots at bananas. The aim is to start the banana when the arrow points to one of the two gorillas. It may sound simple, but it isn’t because the arrow is spinning faster and faster.

– «Go know!»: A game with a very neat aesthetic, a retro look and large pixels. Its main characteristic is its colors as it is a game that is reminiscent of the Gameboy games of yesteryear due to its monochrome design. It’s a platform game with simple controls where thinking about what to do is more important than the player’s skills.

– «A grim hunt»: For lovers of “pixel art”, this is a game in which we control a small skeleton that has to reach a magic mirror. In this case, skill prevails, as each stage is more complex than the previous one.

– «peeled shinobi»: A FRIV version of Ninja Turtles, a game reminiscent of the action titles the Turtles lived on the NES, in terms of both aesthetics and gameplay. We have to enter the dangerous city and lock ourselves in the shell to go through the levels.

– «No duck heaven»: A game of skill that is fun and with an interesting premise. Two duck brothers traveling in a spaceship are drifting in space. From then on, everything revolves around classic mechanics: a game of gravity. This time, however, you will have to use your weapons to move through the scenarios.

– “Super Hot Pellet Muncher 2000”: A “Pac-Man” clone with a unique twist: ghosts only move when the player moves. It has a variety of accessories that give the player a lot of options, a simple game but very complicated to use.

– «Demon Castle»: In this case it is a “Castlevania” clone. The game has the dynamics of the saga called “Metroidvania”, although it is more action and platform focused than exploration. The game is very reminiscent of the original, both in the NES and arcade games.

– «Extreme parking spaces»: One of those FRIV games that make monitors fly out of windows. In theory, the premise is simple: we drive a red car and have to park it. However, any friction will result in the “Game Over” message being displayed.

– «coconut monkey»: A very short and entertaining game with an aesthetic inspired by “Super Monkey Ball” in which the player has to deal with a chimpanzee armed with coconuts having to overcome levels full of spikes, chasms and traps of all kinds.

And if you want to get to know the best classic FRIV games, here are the best ones according to TreceBits script in this video: