This strange creature has been sighted nine times in history. Now, scientists have had a fascinating encounter. And they captured it on video. Now we can all see the fish with the transparent head. 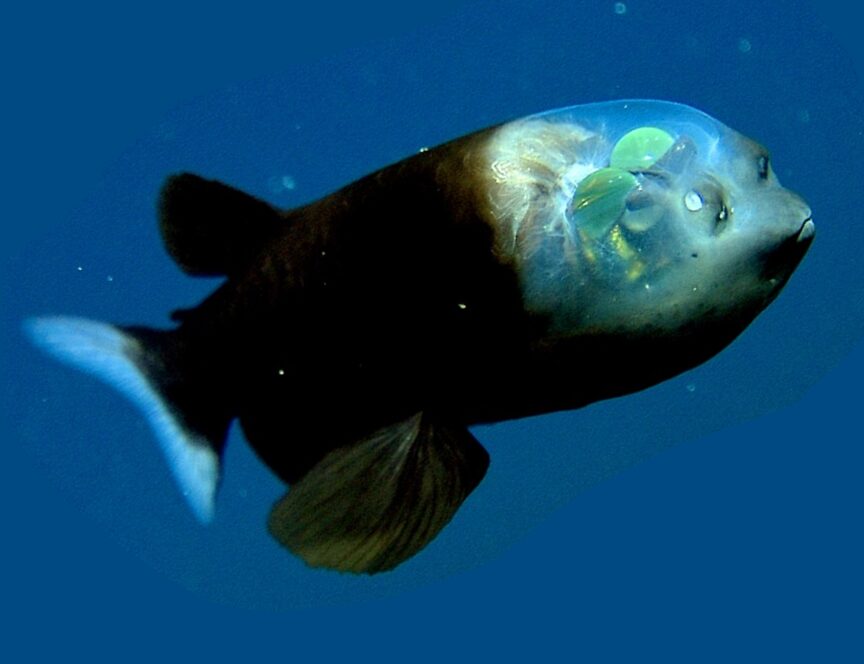 Its head is rounded and translucent. Green globe-shaped eyes are visible. It is called the barrel-eyed fish (Macropinna microstoma). It is the least abundant species inhabiting extreme depths.

“It first appeared very small in the distance. But I immediately knew what I was looking at. It couldn’t be mistaken for anything else,” Thomas Knowles said. He is the lead aquarist at MBARI. It happened at 650 meters in Monterey Submarine Canyon. It’s one of the deepest on the Pacific coast.

The fish’s eyes are incredibly sensitive to light. They glowed bright green when illuminated by the vehicle. It is believed that barrel-eyed fish stand motionless waiting when hunting. They just float. They wait for their prey, such as zooplankton and jellyfish, to pass overhead.

A lot to know

Transparency is thought to serve as a shield. It defends them from the stinging tentacles of siphonophores. These are jellyfish-like organisms and would be a natural enemy. The barrel eyes’ habitat ranges from the Bering Sea to Japan and Baja California. They are usually found between 600 and 800 meters deep, near the point where the water plunges into total darkness.

“We don’t have any idea of population size,” says Bruce Robison, also of MBARI. “Most aspects of its natural history remain unknown.”

The transparent-headed fish was first described in 1939. Fishermen caught these fish with their nets. However, they did not have the transparent shields on their heads because they were destroyed in the catch. And it was not until the 2000s that this transparent shield became known.

“We had no ambition to capture this animal at all. The aquarium is not set up to care for this little-known fish, Knowles added.