The ancient peoples of the Middle East had started the practice intentionally cremating their dead at the beginning of the 7th millennium BC After one in the Open access journal PLOS ONE by Fanny Bocquentin of the French National Center for Scientific Research (CNRS) and her colleagues.

Excavations at the Neolithic site of Beisamoundiscovered an old grave in northern Israel cremation contains the remains of a corpse that appears to have been cremated intentionally as part of a Funeral practice. These remains were found directly between 7013 and 6700 BC. Dated, making it the oldest known example of cremation in the Middle East.

Most of the remains are the skeleton of a young adult. The bones indicate that they were heated to temperatures above 500 ° C shortly after death and are in a pit that appears to have been built with an open top and thick insulation walls. The microscopic remains of plants in the pit are likely remains of the fuel for the fire. This evidence leads the authors to identify this as an intentional cremation of a recent corpse as opposed to burning dry remains or a tragic accidental fire. 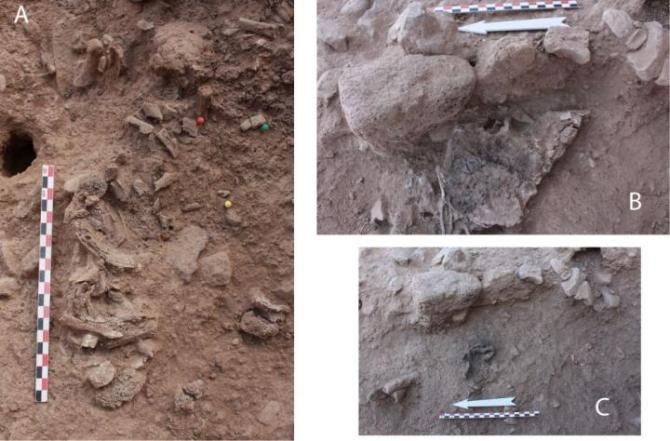 Image of the bones in situ: A. Axial skeletal segment: exposed ribs and vertebrae in the center of the structure. B. Right hip in situ; almost completely preserved from a piece of collapsed mud wall. C. Four proximal phalanges of the right foot, lying just below the right hip bone. (Photo: Bocquentin et al., 2020 (PLOS ONE, CC BY))

This early cremation takes place during an important transition period in burial practices in this region of the world. Ancient traditions died out, such as skull removal and burial within the settlement, while other practices such as cremation were new. This change in burial procedure could also mean a transition in the rituals of death and the importance of the deceased in society. A closer look at other possible cremation sites in the region will help shed light on this important cultural shift.

Says Bocquentin, “The funeral treatment consists of the in situ cremation of a young adult person in a pyramidal fossa who previously survived a flint projectile wound. The inventory of bones and their relative position greatly aid in the deposition of an articulated corpse, not dislocated bones.” . He adds: “This is a redefinition of the place of the dead in the city and in society.” (Source: NCYT amazement)

How to do a keyword search step by step

Ants guided by an internal pedometer

Which cryptocurrencies are the most popular?

Why did all the empires of old fall?