A new study examining fossil specimens of the giant crocodile Deinosuchusconfirmed that this animal had banana-sized teeth that were capable of knocking down even the largest dinosaurs.

And he wasn’t alone!

The investigation, published in the Journal of Vertebrate Paleontologyalso reveals different species of the aforementioned “crocodile of terror”. Two species, Deinosuchus hatcheri and Deinosuchus riograndensis, lived in West America from Montana to northern Mexico. Another, Deinosuchus schwimmeri, lived along the Atlantic coastal plain from New Jersey to the Mississippi. At that time, North America was bisected by a shallow sea that stretched south from the Arctic Ocean to what is now the Gulf of Mexico.

From previous studies of skull remains and bite marks on fossil dinosaur bones, paleontologists have long speculated that these giant animals hunted dinosaurs.

Now this new study, led by Dr. Adam Cossette shed new light on the monstrous creature and further confirmed that it certainly had the head size and jaw crushing power to do just that. 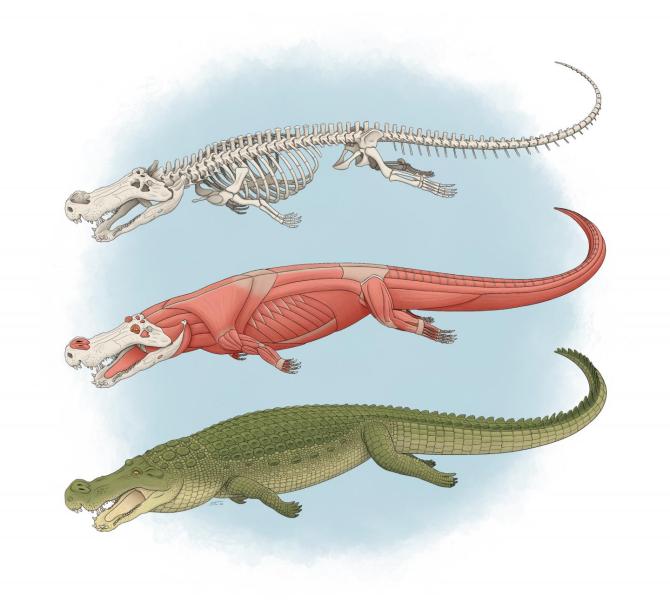 “Deinosuchus was a giant who must have terrorized the dinosaurs who came to the water’s edge to drink,” says Dr. Cossette from the New York Institute of Technology at Arkansas State University College of Osteopathic Medicine. “Until now, the entire animal was unknown. These new specimens that we have examined reveal a strange, monstrous predator with teeth the size of a banana.”

Co-author Stephanie Drumheller-Horton, a paleontologist at the University of Tennessee, added, “Deinosuchus appears to have been an opportunistic predator, and since it was so large, almost everything in its habitat was on the menu. We actually have several Examples of tags from bites of D. riograndensis and a species just described in this study, D. schwimmeri, on turtle shells and dinosaur bones. “

Despite the generic name meaning “crocodile of terror,” they were actually more closely related to alligators. Because of its huge skull, it didn’t look like an alligator or crocodile. The muzzle was long and wide, but puffed up around the front of the nose in a manner not seen in any other living or extinct crocodile. The reason why your nose is enlarged is unknown.

“It was a strange animal,” says Brochu. “It shows that crocodiles are not ‘living fossils’ that have not changed since the times of the dinosaurs. They have evolved as dynamically as any other group.”

Deinosuchus disappeared before mass extinction at the end of the dinosaur age (Mesozoic era). The reason for the extinction is unknown. From here, the authors ask for further studies to better understand Deinosuchus.

“It had two large holes at the tip of the snout in front of the nose,” says Dr. Cossette. “These holes are unique to Deinosuchus and we don’t know what they are for. Further research will help us solve this puzzle and we can learn more about this incredible creature.” (Source: NCYT amazement)

Where to work in hospitality and tourism

What is Rakuten TV