The Intel processor catalog is simply overwhelming and will be expanded with the introduction of the 10th generation core. If we add these innovations to the models of recent years that are still on the market and that are still installed on millions of machines, we have an impressive range. And it is not always easy to tell the difference.

Intel offers a special page on which it can be checked whether a particular model has the features sought by the user, but the different product lines, brands, series, architectures, generations, technological processes, platforms, market segments, focal points, features and SKUs. make it difficult for most users to differentiate.

And they should be known in detail to know those that are installed in the new OEM machines, or when they are bought in retail stores to update existing machines. Today we're going to work to update the guide we published with the Intel processor catalog.

How to identify the processor installed on a PC

If you don't know the processor installed on your computer before starting it, you can easily find it on Windows operating systems under Control Panel> System:

In Windows 10 you can also display it under Settings> System> Info tool:

If you need more information, you can use dozens of free apps. One of them, simple, free, and very complete for Windows, is CPU-Z, which, in addition to processor, graphics, and memory, tells you about the chipset and socket on the motherboard, the key in case you want to update the processor.

If you are using Linux systems, you can also easily find the processor information, although this depends on the distribution and the desktop. For example in Ubuntu with GNOME under Configuration> Details> Info, while in KDE it is in the KInfocenter> Help> About the system. If you are using the console, you can use the "neofetch" command.

Intel uses one alphanumeric scheme to differentiate your CPUs. A higher number of processors in a class or family usually indicates more performance or features, but not always, and the multiple additions and the architectural mix of recent generations have made understanding difficult. Let's go with them

Six years after its first announcement and after some architectures that improved the 14nm process as a transition, Intel finally got into the process of 10nm manufacturing technology with the Ice Lake series. They were introduced in summer 2019 and the first teams were announced at the end of the year. The number of Intel customers is small.

Aside from what's new in the manufacturing process and the new Sunny Cove microarchitecture, you should know that only two "U" and "Y" series have been commercialized, especially for ultra-portable 2-in-1 convertibles or mini-PCs, who are committed to low consumption and energy efficiency. These CPUs also release the new integrated graphics from Iris Plus Graphics (Gen11), although they are not used in all models.

This way you can find versions like the one in the picture, like the rest of the generations, defined by an alphanumeric scheme, which we will discuss below.

Due to production complications in the jump to 10 nm technology processes and the inability to meet demand, Intel again expanded 14 nm ++ silicon to launch another new platform as a transition. We hope that this is the last one and the step at 10 nm can be completed.

Comet Lake is also listed as the tenth generation core, so we have two different architectures in the same generation. This also makes your identification difficult. With this platform, Intel will cover the entire computer segment with three different series.

The first was Comet Lake "U" and was launched almost simultaneously with Ice Lake last year. Low-consumption models are intended for the group of basic laptops, ultraportables, 2-in-1 devices, convertibles or mini PCs.

The second series is Comet Lake "H" and we had the opportunity to introduce it to you last week. They are intended for the largest and most powerful laptops, for games or simple mobile workstations that do not require CPUs like the Xeon. The third large series of this platform will be Comet Lake "S" for desktop computers. The launch is expected later this month.

After a fairly long period of time (commercially not required), Intel accelerated the launch of this platform after the huge competition caused by the launch of AMD's Ryzen 3000 and vulnerabilities in meltdown and Specter processors. This is the only way to understand the few months that have passed since the arrival of the eighth generation.

The identification of this generation, which was marketed in various series in 2018 and 2019, is similar to the previous one and includes knowledge of the individual parts of the alphanumeric scheme used by Intel.

We checked in detail:

Two large customer series have been commercialized and differentiated for this generation, but they can be confusing:

The first processors of the eighth generation of core processors were distributed in the last quarter of 2017, including the offer for all market segments (workstations, desktops, laptops, AIOs, mini-PCs …) and marketed in models such as Xeon, Core i9, Core i7, Core i5, Core i3, Pentium and Celeron. The eighth generation offers models like the following:

For the first time, Intel mixed several architectures of the same generation and also integrated series that were previously only intended for a single platform.

7th generation – Kaby Lake. It is the seventh generation of core processors, and although they are no longer available, they still see new devices. They offer models for all market segments with examples like 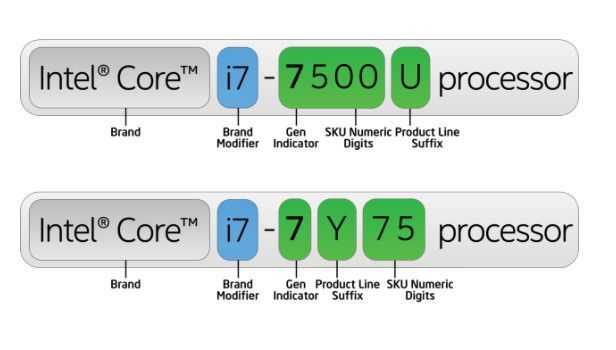 Follow the same scheme as the previous ones with brand, modifier, the Number 7 which is the production indicator SKU numbers and corresponding suffixes, in this case:

6th generation – Skylake. They are very similar to the previous ones and use an alphanumeric scheme based on the generation and the product line, possibly before the brand and its modifier. The generation indicator is number "6", which corresponds to the sixth generation of core processors codenamed Skylake. 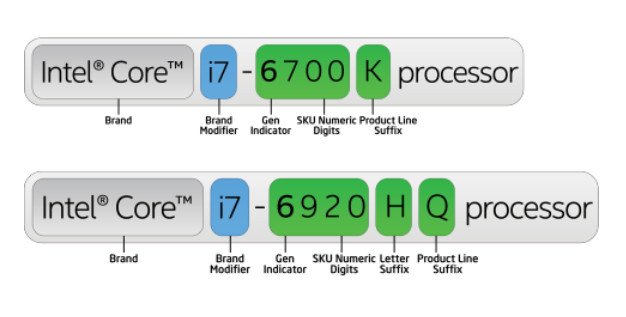 5th, 4th and 3rd generation – Broadwell, Haswell and Ivy Bridge. They are very similar to the previous ones and use an alphanumeric scheme based on the generation and the product line, possibly before the brand and its modifier. The generation indicator number "5" corresponds to the fifth generation of core processors with the code name Broadwell. The series adds other suffixes that have not been used in recent generations, such as "C" (unlocked multiplier and high graphics performance) and "R" (offered on socket BGA1364 – Mobile).

The generation indicator is the number “4”, which corresponds to the fourth generation of core processors. This generation has a higher number of suffixes, always with one or two letters, indicating whether they are microphones for desktop or portable devices, for the unlocker with multiplier, for high performance or for ultra-low voltage.

In the end we have the code name "Ivy Bridge" of the third generation and the number "3" as an indicator. They are all discontinued, but continue to run on outdated computers.

Intel Lakefield. A special and innovative platform for Intel, as it is the first processor core to combine different architectures. This design will seem familiar to you because ARM has been using it with big.LITTLE technology for years and we can find it on millions of smartphones or tablets.

It is presented in models such as the foldable Surface Neo or the Samsung Galaxy Book S and controlled under Windows 10X. At the moment we only saw one model, the Core i5-L16G7. In addition to the brand modifier, we can easily recognize it by that "L" This indicates that it is a Lakefield SoC. The last "G7" shows the integrated graphics it will contain.

Intel Xeon Mobile. Skylake architecture introduced the first Xeon series processors for laptops, and the company has expanded the catalog. The numbering system used has little to do with the previous ones, although they are easily distinguished by the suffix "M" to define that they are intended for mobile workstations. We check it:

Kern M. Ultra low voltage models for tablets, 2 in 1 and convertibles, which use an alphanumeric scheme followed by the modifier. Sometimes an alphabetical suffix is ​​inserted at the end of the processor name, which represents the processor line. In recent generations, they have disappeared from the Intel line. You can find them from the fifth to the seventh generation.

Intel Pentium. They are easier to distinguish by their fewer modifiers. It is a series for the basic equipment that you can find on desktops, laptops or mini PCs. They contain an alphabetical prefix, followed by a four-digit sequence of numbers. You can see dual and quad core models for processing and different TDP consumption. They are available in almost all generations and some like the eighth offer different versions such as "gold" and "silver".

Intel Celeron. You can find a step below the previous one in a three-digit numerical sequence or in a five-digit sequence with an alphabetical prefix and four digits, depending on the processor type. They are available in almost all generations. 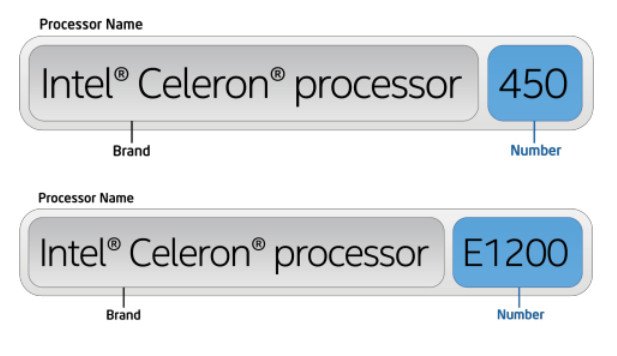 Intel Atom. The lowest performance and lowest consumption of the entire Intel series. They were born with the first netbooks and have been discontinued for years. They are classified using a three-digit numerical sequence and can contain the alphabetical prefix "N" or "Z", which indicates use in portable Internet devices (MIDs). They practically disappeared from the new teams from 2018. 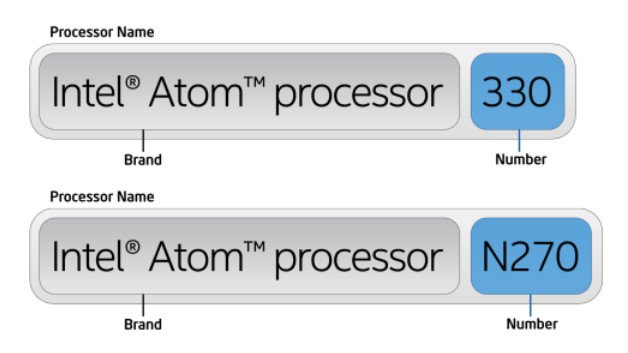 We stop here a catalog for heart attacks in number of models, architectures, generations, series, technological processes, platform, approach or properties. And that we weren't concerned with the technical features, sockets, chipsets and boards to which they are connected, or with other series for the business market such as Intel Xeon Scalable (server) or Xeon W (desktop workstation).

Donald Trump is launching his own digital platform