The use of webcams has skyrocketed since the COVID 19 pandemic restricted us to our homes. Those who can telework need to connect with the rest of the team, and using video conferencing is one of the preferred communication methods. Add to that the millions of students who connect remotely to teachers and centers, and everything that comes from personal video calls to family and friends.

It is no wonder that the price of some series of webcams has increased due to high demand, as has access to excellent business collaboration services and the downloading of video conferencing applications to mobile phones and PCs. Of course they are very useful for providing video and audio communication, however we must not forget their securityThis is all the more true in times of increasing usage and malware campaigns that, as usual, use the media impact of all of this.

Web cameras are better off when not in use

The picture of an adhesive tape that covered the camera of the personal computer of Facebook founder Mark Zuckerberg went around the world. The fact that the head of the largest social network in the world thought it necessary to cover the webcam caused a lot of media noise about the Security and privacy of these devices. 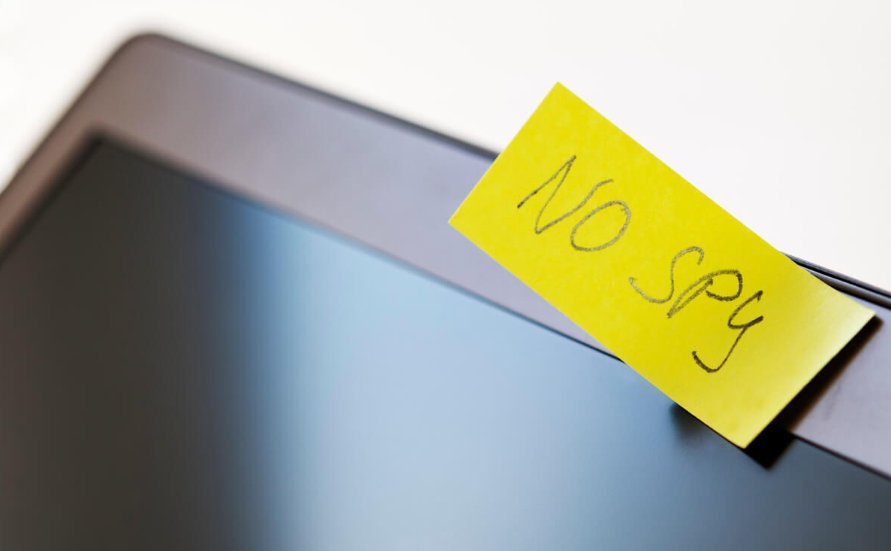 And the debate is not over, although history goes a long way. Espionage through webcams has been known for more than a decade and has been carried out using various techniques and goals. From government spying to installing malware using tools like Gumfish, which is taking over machines that take advantage of this Vulnerabilities such as Flash Player or simply invading other people's privacy in order to blackmail celebrities or the public on foot, among other things.

For all of this, there are quite a few users and / or experts who decide to deactivate this component. Today we're going to remind you of some methods you can use to disable the webcam when it's not in use. At the same time, they are reversible for other times when you need to use them.

If you see a sticker on the top frame of a laptop, on an all-in-one AIO, or on a dedicated webcam above the monitors, you know what that means. If the method destroys the aesthetics of your brand new laptop, you can buy less botched dedicated solutions than They are very cheap and can slide at willcovering the lens or not. 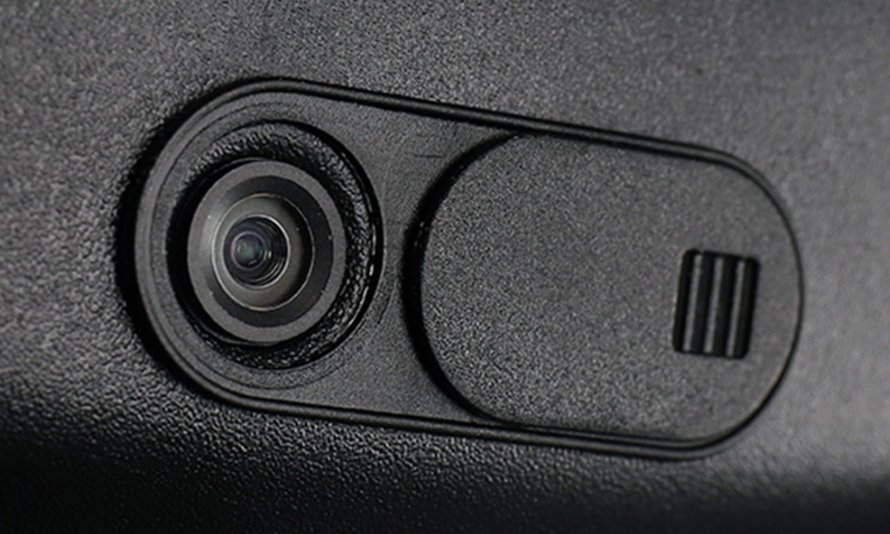 There are many offers on the Internet, and some manufacturers offer them almost as standard, as we saw in the analysis of the HP ZBook 17 G5. It's a simple and effective method, but there are some considerations to consider. This method avoids video espionage, but no audio because the webcam is still working.

Pull the plug out of the socket

It's that simple. Many desktop PC users use an external webcam, which is usually placed on top of the monitor. Unplug the USB connector It is an infallible method It works regardless of hardware or operating system. How they support the function Plug and play It will take a second for the connection to be restored when you need to use it.

Deactivation in the operating system

You can also quickly deactivate the webcam at system level in just a few steps. On Windows operating systems, this is generally done by disabling or removing the component from Control Panel> Device Manager> Imaging Devices.

In the latest versions of Windows 10, this is even easier because you can Deactivate both the camera and the microphone with a simple click from the Configuration> Privacy> Camera tool: 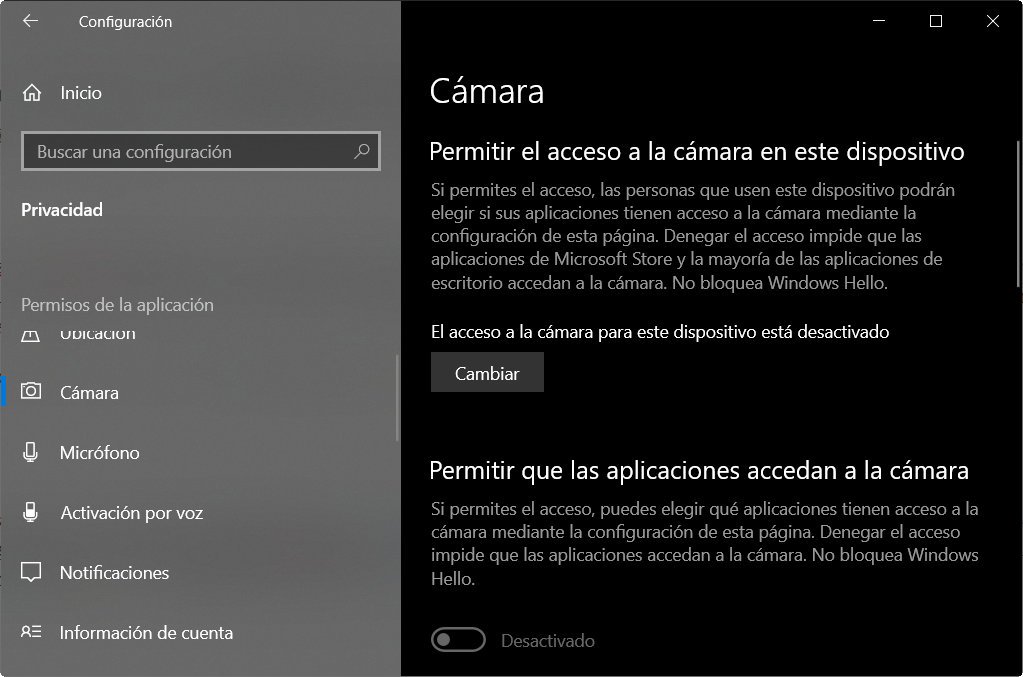 In the same way you can Deactivate microphone and in both cases it is a comfortable and easily reversible solution. But it is not infallible. If a hacker succeeds in introducing malware and thus administrator access, you can reactivate it and even install drivers and reactivate these components.

Disable webcams on smartphones and tablets

Cameras and microphones are a point of Particular attention to mobile devices. Both for cybersecurity and to prevent the recording of compromised material that children and adolescents upload to the Internet on many occasions without adequate preparation via their parents' terminal or via their own terminal.

There are several points for these devices that we can act on. One of them is "Permissions". Although this depends on each manufacturer, they are generally managed in Android via the configuration tool (Settings)> Applications> Permissions or on a tab for data protection if they are implemented. If you don't let it be controlled, you will be surprised by the large number of applications that try to access the camera or microphone. Disable those you don't use. There is also software that does the process for us and even reports suspicious activity.

Another even more powerful method allows Deactivate all sensors, from those designed for cameras and microphones to GPS, which we also use to avoid geolocation. In Android 10, the developer tools have an option that can be activated by tapping the build number five times. This is usually located under Settings> Phone information.

Another option is to put a physical cover (or a simple sticker) on electronic tablets and smartphones. The truth is they are aesthetically awful on a cell phone, but everything is for privacy if you don't use the previous methods.

Deactivation in the BIOS

Is Another option for laptops or AIOs with integrated webcams that have this option in the BIOS. You restart, call the BIOS and deactivate an entry that is displayed as "Webcam", "built-in camera" or "camera CMOS". The option is unusual and only included in some models. Note that most built-in webcams use the same built-in module as the microphone, so you may leave it disabled.

If you want complete privacy for video and audio, this is a good option because an attacker is unlikely to be able to access it, although re-activation takes longer because you have to restart the computer and call the BIOS again.

Don't trust the activity being led

Most webcams have a light that illuminates when in use. This way we could theoretically know if it is used by third parties. However, be careful because not an infallible method. This was demonstrated by researchers at Johns Hopkins University, who used a Remote Administration Tool (RAT) to create a proof of concept that can be used to reprogram the chip of some cameras. And that without activating the notification light, so that the users remained completely unarmed.

All methods of attack to hack webcams and get remote access Take advantage of some vulnerabilities in computers and devices, the operating system or in particular its applications. Strengthening the security of PCs and mobile devices is therefore a good measure of protection from scratch using security tools. Updating the system and applications to the latest versions; Be careful with free WiFi; Takes care of the download area, the installation of applications from unsafe sites and with the necessary caution when surfing the Internet.

Finally. Video conferencing is a preferred tool for business collaboration and personal communication, with the explosive use increasing in the times we've lived. However, web cams are extremely dangerous devices in the hands of cybercriminals, and there is no harm in keeping them safe when not in use.