DirectX 12 Ultimate is an important update to the well-known Microsoft API. The Redmond giant has taken an important step Simplify, standardize and standardize developments of new generation games for PC and Xbox Series X, as four important next generation technologies for the sector are brought together under a single banner.

Before we take a closer look at these new technologies, let’s think about the idea of ​​DirectX 12 Ultimate to unify game developments for Xbox Series X and PC. It may sound a bit strange at first, but has a very simple explanation and that is that the games are on both platforms They are mainly developed under this API. Yes, there will be games that come to PC with Vulkan, but this will still be a “minority” option, for better or for worse.

This means you’re developing an Xbox Series X game on DirectX 12 Ultimate facilitates later adaptation to the PC considerably and vice versa. It should come as no surprise to us that Microsoft has a clear interest in supporting the Xbox Series X, but also has a key presence in the PC world, so we are deep inside a natural movement that is undoubtedly very positive.

From a strict point of view, we can define DirectX 12 Ultimate as a version that collect new technologies This extends the functionality of the original version of DirectX 12. These new technologies are now integrated totally nativeThis means that game developers will find it much easier to use and develop their titles with the most advanced in the industry. 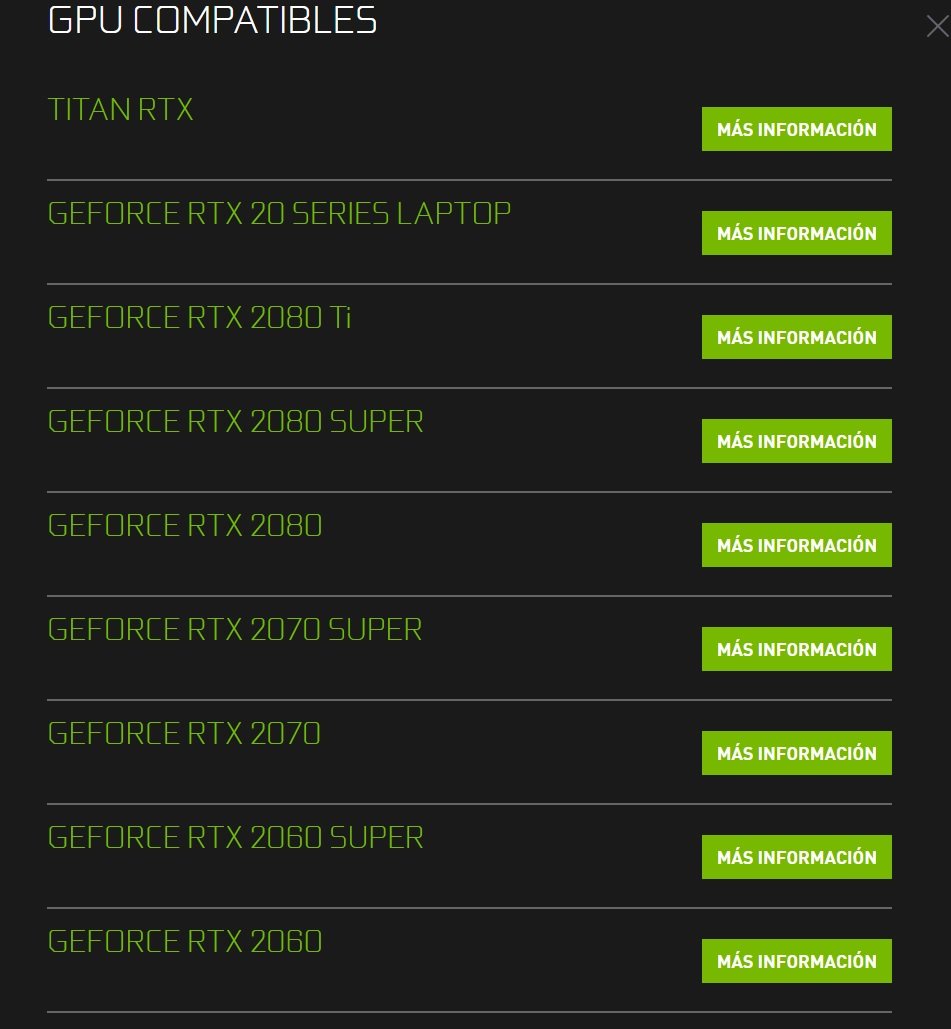 Which graphics cards are compatible with DirectX 12 Ultimate?

I am sure that our most advanced readers will remember what happened to the different versions that Microsoft released after the original version of DirectX and that the older graphics cards no longer have any support. We don’t have to go far back to find simple examples, the GeForce 7000 series and the Radeon X1000 limited to DirectX 9while the GeForce 8000 series and Radeon HD 2000 made the leap to unified shaders and supported DirectX 10.

Well, in the case of DirectX 12 Ultimate, full support today is limited to the GeForce RTX 20 series. The Radeon RX 5000 series, based on the RDNA architecture, No support for hardware accelerated ray tracingand are not compatible with other key technologies such as mesh shaders or variable rate shaders. In fact, this means that this architecture could end up being a pretty bad “age”, especially if these technologies are really going to be used later this year.

AMD has confirmed that the RDNA 2 architecture used in the Radeon RX 6000 series, which will be available in the third quarter of this year, will be fully compatible with DirectX 12 UltimateThis means that they are ready to accelerate the hardware ray tracing function. We’ll see what they can do.

I remind you that, according to the latest information, PS5 does not provide a GPU based on the RDNA 2 architecture, but is limited to an intermediate generation that we can consider as RDNA 1.5, and that this could have a significant impact on useful life due to the lack of features that are clearly valuable for optimization.

Previous generation graphics cards are compatible with DirectX 12, but do not support the advanced features that DirectX 12 Ultimate brings together. and we’ll find that out below.

Ray tracing has marked an important advance in graphics quality in the world of video games. As our most advanced readers know with this technology, it is possible to create effects from very realistic lighting, reflections and shadows, However, the cost of the performance level is enormous, so even the GeForce RTX 20 series, which has RT cores to accelerate this type of workload, does not really achieve optimal results.

DXR 1.1 gives you a significant performance boost that balances the image quality to performance ratio. Developers can use ray tracing to recreate the behavior of light in the real world, Generate large amounts of jets that bounce and bounce off different surfaces, but with this new API you have better control over this technology.

More control should be tantamount to more optimization, and the latter should translate into implementation Better performance in raytraced gamesat least in theory. I think we have to wait for the Xbox Series X to launch before we can really judge how DXR 1.1 can make a significant difference or not.

In current games we have already seen that ray tracing can be configured in different quality levels, although it is actually more correct to say in different intensity levelsBecause the greater the number of rays generated, the greater the realism, but also the greater the consumption of resources. This greater control that Microsoft promises should have a positive impact in this regard. All in all, we shouldn’t expect miracles as it continues to be a very sophisticated technology.

Mesh shaders are not novelty in the narrow sense, although thanks to their native integration with DirectX 12 Ultimate, their use is expected to increase, and this is good for everyone because they represent a great progress in terms of optimization This could remarkably improve performance in new generation games.

The handling is very easy. It is a technology that analyzes all elements in a scene in real time and decides using a series of basic buttons, Which elements of it have to have a higher geometrical load? And what elements do not always balance the balance between performance and image quality.

I’m sure many of you were reminded of the variable rate shader, and yes, in essence, the idea is pretty much the same, though in this case applies to geometry and not to shadows. For example, imagine playing DOOM Eternal. Well, the central part of the screen should have a higher geometric load, and this could easily be reduced in the most remote areas.

When the analysis is complete, the parts with the least visual impact have a reduction in Number of triangles usedWhile the sections of the image that are heavier in the scene may receive an increase in the total number of triangles. This way, you can even improve the bottom line and reduce the impact on performance.

As we expected, we are facing a “first cousin” of the previous one. This technology also analyzes the elements present in a particular scene and evaluates them based on everything that appears in them and other special features. Which sections should have better shading and which shouldn’t.

The goal is the same as in the previous case, Reduce resource consumption Apply shading intelligently without noticeable image loss.

Some games have already used such technology as Wolfenstein Youngbloodand the improvement in performance was between 5% and 10%. Not bad at all, especially considering that it was practically impossible to find a minimal loss of picture quality.

The last of the four newest generation new technologies that brings DirectX 12 Ultimate and frankly together one of the most interesting and one of the most unnoticed happened.

The aim of this function is to achieve a more efficient rendering. Yes Microsoft focused the shot on optimization Frankly, I’m not surprised with DirectX 12 Ultimate, because if you want ray tracing to really work on Xbox Series X, you need to reduce resource consumption on other fronts.

With sample feedback, resources from previous scenes are reused Use and reuse information from picture elements that do not change frequentlyhow the shading and colors of certain scenes. This avoids the need to generate a new frame completely and reduces resource consumption.

Thanks to this technology, we can too Improve the workload with high quality texturesand reduce classic problems that are as annoying as “popping” (sudden appearance of textures and objects) and “stuttering” (stuttering the image).

Why is DirectX 12 Ultimate so important?

In a way, we said it in the previous paragraphs. DirectX 12 Ultimate is important because it is a clear and definitive move in favor of unifying the developments that focus on Xbox Series X and PC. Developers can benefit from the start all resources of both systemsand develop at a low level Get a good optimization it won’t be a problem anymore.

DirectX 12 Ultimate should allow for a significant improvement in performance, which will undoubtedly benefit PC gamers who have computers with more modest hardware. For example, imagine a computer based on an RTX 2060. This graphics card can optimally move games in 1080p and 1440p with titles of the current generation, however New generation developments will be more demanding And they could get you in trouble, especially with maximum quality settings.

Thanks to the meshed shader, the variable rate shader and the sample feedback technologies from DirectX 12 Ultimate This graphics card could age much betterand deliver superior performance to even the next generation of demanding triple-A titles.

There is no doubt that DirectX 12 Ultimate is an important advance for Standardization and optimization of developmentsBetting on a low-level approach and making optimal use of the resources of each platform, but it’s also an advance in favor of ray tracing. The integration of DXR 1.1 and the promise of better control and more balanced performance could be the key Democratization a technology that has so far been considered almost unaffordable.

It is clear that Xbox Series X will be the big beneficiary of this new API. This was already happening at the time when Microsoft announced Xbox One. That said, a specific version of DirectX that was adapted to the capabilities of its console was the key to performing well and realizing its full potential from day one is repeated with Xbox Series X. In this case, however, the Redmond company PC users are not bypassed.

The lost city under the desert

Is It Too Late To Invest In Cryptocurrencies? [Vídeo]

Animals that heal themselves