The release of Windows 10 20H2 it is imminent. The development of the version was stopped for weeks when build 19042.508 was announced as the final compilation and only patches for vulnerabilities or serious reported bugs are integrated.

Windows 10 20H2, also known as the “October 2020 Update”, is available Free for teams with valid licenses Is activated by Microsoft servers and updates earlier versions of the system through an optional update in Windows Update or via the Microsoft portal for Windows 10, via the web or via the usual ISO images. The version will also serve as the basis for the pre-installed version that manufacturers offer for new devices.

As we have been expecting you for the past few months after the Insider Tests, Windows 10 will be a “smaller” version without great new features. Microsoft varied the development and sales of the system and decided from the original idea of ​​two annual versions for a major version in spring and a lighter update as a “service pack” in autumn.

The reasons are well known and compelling: To regain control of Windows 10 updates, improve software quality, and solve the disastrous updates that consumers and businesses have suffered in terms of stability over the past few years, which is a serious problem in this one Process represents system tests and quality control.

In this way, the version is a cumulative update over the current Windows 10 2004 that is intended for Improve stability and performanceFix known bugs and add the latest security patches available. Still, there is some interesting news that we will offer you.

Microsoft continues to refine a component that worked just fine in Windows 7 and which, oddly enough, is still there in Windows 10. We like what we’ve seen in previous versions. Cleaner, more modern, more attractive and more integrated with the rest of the user interface in the Fluent Design language that Microsoft uses for the system and other applications.

It will have a more uniform and partially transparent background for the mosaics and it will have the option to deactivate and convert the “Live Tiles” (which are still not liked by a good number of users) static symbolswhich are also of new design for the occasion and the truth is very well achieved.

By recognizing themes of the mosaics, the use of light or dark themes can be determined instead of always being colored, so that monochrome mosaics are possible. You can also activate the color for the start menu under Settings -> Personalization -> Colors. The tiles are displayed in color while maintaining the transparency effect.

There are also some improvements to the All Apps list. App icons no longer have to fit into colored squares, so not only are the icons larger, but the list looks a lot cleaner overall. There is also a new folder icon that is more in line with the Fluent Design language.

The Taskbar It also offers minor changes when you install Windows 10 20H2 under new accounts. You’ll see new icons to replace the previous ones, the new Edge, your phone if you’ve linked an Android phone to the Microsoft account, or the Xbox application if you’re using a PC for gaming.

More changes are coming for the 2 in 1 devices. Microsoft has adjusted the way the user interface changes when we disconnect the screen. You will no longer see a notification asking if you want to switch to tablet mode as Windows will do this automatically with the appropriate settings for the new experience Microsoft is preparing. This increases the space between some items and adds a virtual keyboard to the system tray to improve the touch experience. These changes have already been implemented for the user interface and are now 2 to 1 under Windows 10.

The web browser continues to be one of the most important and widely used applications on a PC, and Windows 10 20H2 will publish that New development from Microsoft based on Chromium Instead of the original legacy version of Windows 10, you are certainly already using it, as Microsoft made it available as an update to the previous version and in new versions for Windows 7, Mac, and even Linux.

The new thing about Windows 10 20H2 is that it is integrated into the system without a trace of the previous one. In terms of performance, Edge Chromium is the best browser in Microsoft history. Compatibility with web standards; Stability; greater number of features; more privacy options and a larger number of extensions. It’s a welcome novelty.

You already know that Microsoft is on its way to removing the Windows Control Panel as a legacy component. Transfer of its properties to the new configuration tool, more modern and in line with the design and experience of Windows 10, but without the power of the classic general system management tool at the moment.

You can see some of these changes in Windows 10 20H2. To highlight some that have already been implemented, the About tab contains links to some older utilities that were previously only available in Control Panel. Copy buttons have also been added to the Windows Specifications and Device Specifications section so that this information can be easily passed on to a representative.

Under “System> Multitasking” you will also find a new group of settings in which you can use the task switcher Alt + Tab to decide whether individual browser tabs should be displayed. You can choose to display only the main tab, the three or five most recently visited tabs, or all tabs. The Advanced Display Settings page has a new option to change the refresh rate that previously required a third-party utility.

In this section There will be more important changes in the future which are already being tested under Windows 10 21H1 as a new hard disk manager for the management of storage drives. As with other components, there are duplicates in both management tools. We are waiting for Microsoft’s decision, but it will be in future releases.

Microsoft has made some notable improvements to the way notifications are presented in Windows 10 20H2 easier to understand. On the one hand, the name of the application and its icon are now displayed at the top, whereas in the previous design the name was only displayed in a small text below the content of the notification. There’s also a new X button that can be used to close notifications instantly. Previously, you could only hide the notification in the Action Center and then close it from there.

Microsoft has also turned off notifications when the feature Focus assistant It is activated by an automatic rule. This function switches incoming notifications in certain scenarios, e.g. B. when playing games or when using full screen applications, automatically mute. Interesting because the notifications get really annoying. Everything can be managed under Configuration -> System.

The new version will be available in October if no fatal bugs are found that will force the delay. The deployment takes place gradually, starting with users who are actively looking for the optional upgrade This is shown under Settings> Update & Security> Windows Update. It is also automatically activated for insider testers who are on the beta channel. 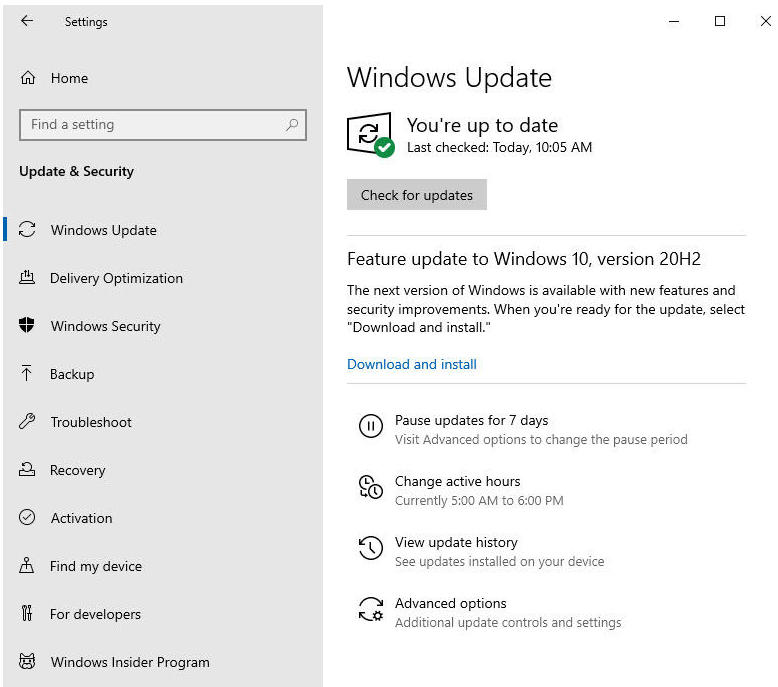 It will be the first step. Microsoft then makes the new version available on its Windows 10 portal via the “Update” button on the same website or via the media creation tool, including the ISO images that are normally published with each version.

The final step will come from Windows Update making the version available to all users in general. All of the above applies to computers with versions of Windows 10 that are still supported. For earlier versions that are not supported or are about to end, Windows 10 20H2 is automatically provisioned.

We will thoroughly examine the different installation types as soon as the final version is available if you want to install it nowYou can use the Windows 10 Client Insider Preview version 19042 in the Insider Channel or through alternative methods that have already been published.

On the other hand, if you do not want to risk errors with the new update that do not affect all users and computers alike, but rarely do not occur, you can prepare your system to delay the installation of this Windows 10 20H2 until check stability. A recommended method for professional users or those who use their computers for production jobs, or for students who cannot afford to be without their computers.

El Salvador, the first country to adopt Bitcoin as a legal currency

Why do we move our hands when we speak?

How to get the digital COVID certificate in Spain