The final version of Windows 10 21H2, the Â “Windows 10 November 2021 UpdateÂ” as Microsoft calls it, is now available and just like the previous ones is free to upgrade PCs that have a valid Windows 10 license. Consumer Home and Pro editions will have 18 months of service and support, while Enterprise and Education editions will have 30 months of support starting yesterday, November 16.

Developed under the codename âSun Valleyâ, Windows chief Panos Panay promised that Windows 10 21H2 would be Â”the most interesting version since the operating system was released five years agoÂ”. And a new version was certainly expected, considering that the last two half-yearly updates had been mere Service Packs. Of course, back then Microsoft had not released Windows 11 and 21H2 was supposed to be the flagship version of the Redmond firm for this year. This is not the case. Since the initial publicity, the version has remained much less.

In any case, its interest remains. The adoption of Windows 11 is still very limited and most users keep computers with Windows 10 (especially those for production) waiting to see Microsoft’s strategy with the new builds Windows 10 to be supported until October 2025Windows 10 will be supported until October 2025, with security patches, bug fixes and support for new technologies, as well as feature updates as we will see below.

In the face of the (controversial) increase in official requirements that Microsoft has imposed in Windows 11, the hardware requirements of Windows 10 21H2 remain unchanged and are as known from previous releases. In addition, all supported drivers from the spring release (21H1) will be digitally signed for 21H2 using the same properties.

As you can see, the minimum requirements are absolute minimums. Although Windows 10 runs quite well on computers with low level of hardware and with these minimums you can install the system, another thing is the daily use of it and applications You will need to have a higher level if you want a decent user experience.

Microsoft repeats strategy and from Windows Update (the most direct way to perform the update) will gradually deploy the version in order to better control potential bugs that may arrive. In this way, the November 2021 update will Â”is initially only available to users with select devices running Windows 10, version 2004 or later, who are interested in the latest features and are ready to install this version on their deviceÂ”, Microsoft explains in the release announcement.

Devices running at least Windows 10 2004 or later will have a faster upgrade experience, as the update will be installed as a monthly update. Everyone else will take longer, but will be upgraded just the same. Actually, Windows 7 PCs can be upgraded to Windows 10 for free and legally, even though the program ended years ago.

If you want to check if your computer is eligible, you can actively search for the update from: 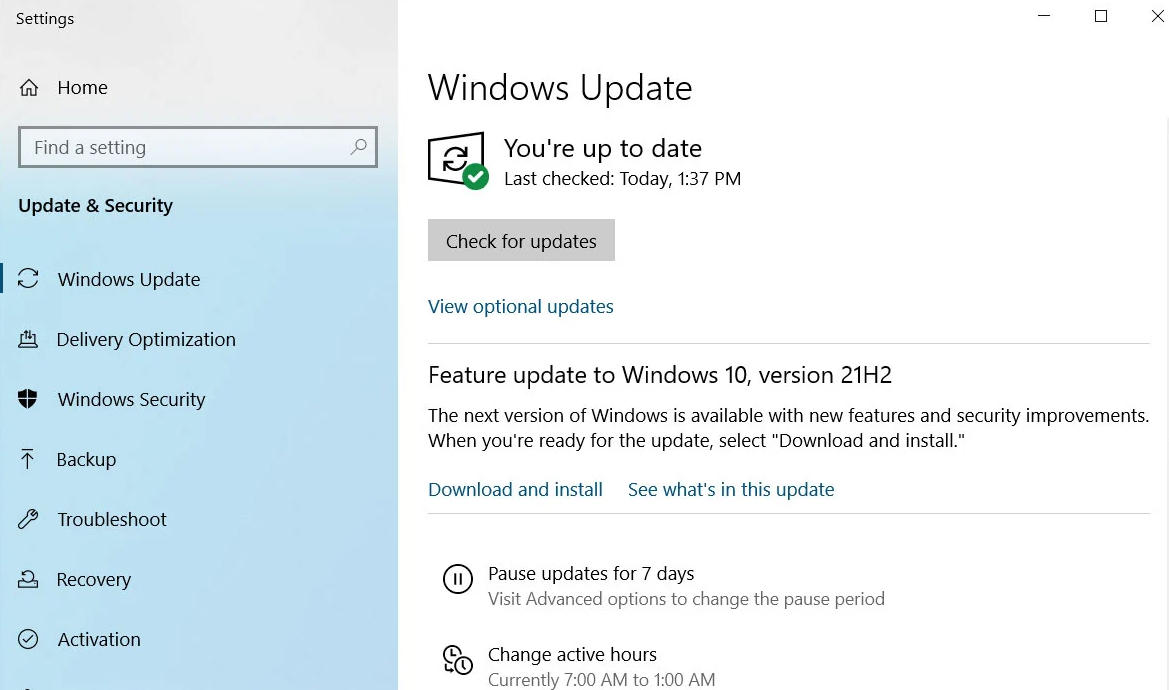 If you still do not have the version available in Windows Update, calm because anyone can already install this Windows 10 21H2 and in different ways that we remind you:

Microsoft has published the Â “Windows 10 November 2021 UpdateÂ” on its software downloads web page, from which we can update directly in the same way we would do with Windows Update, create installation media or download ISO images. As a preliminary step, we recommend making a full backup (or the main files) in case something goes wrong.

The easiest way for those who want to update their computers to the latest version while keeping all their data is as follows: 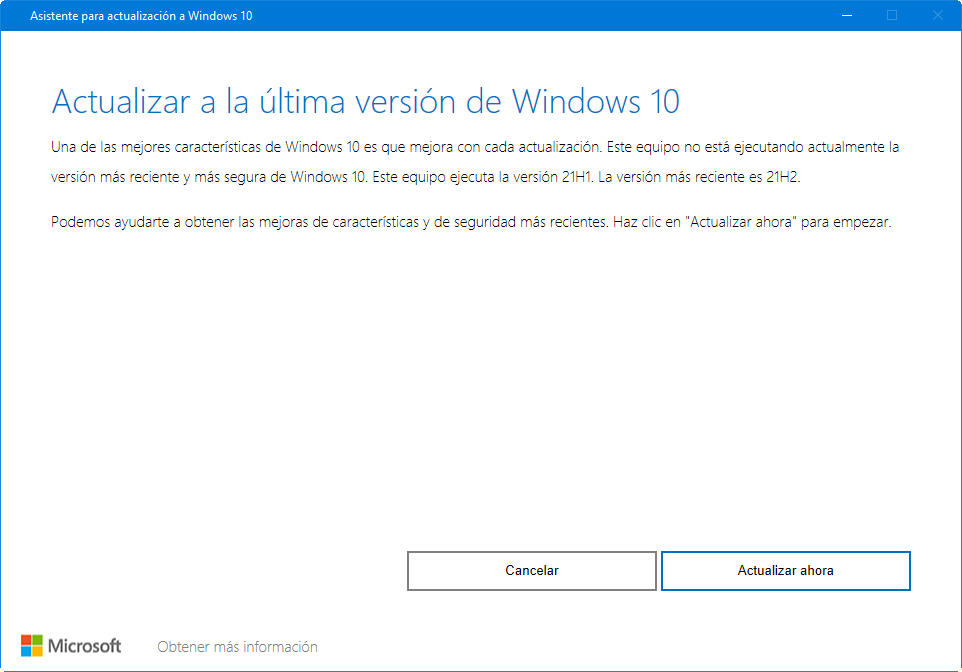 The installer will report the version installed and the version you intend to upgrade to, 21H2. The Windows upgrade wizard will perform the upgrade automatically. This type of upgrade preserves files, data, user settings, and applications you have installed.

If you want to upgrade third party machines or want to use the version to perform “clean” installs from scratch or load them into virtual machines, nothing better than using the media creation tool to create an installation DVD/USB or download the ISO disk images. Here’s how: 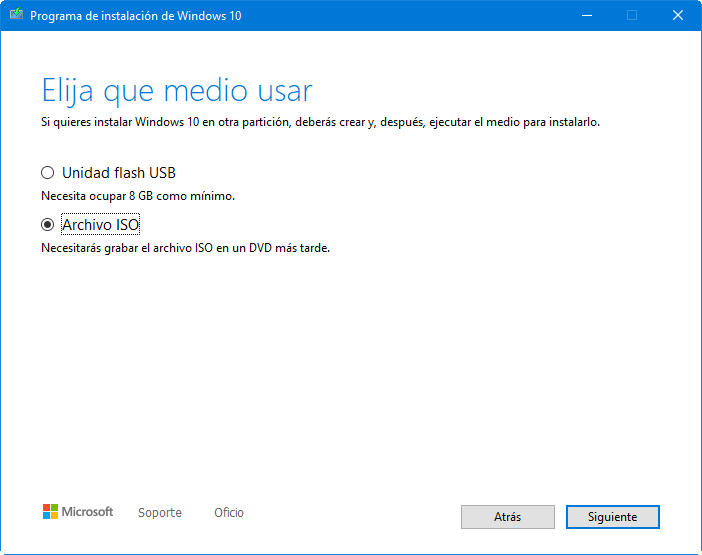 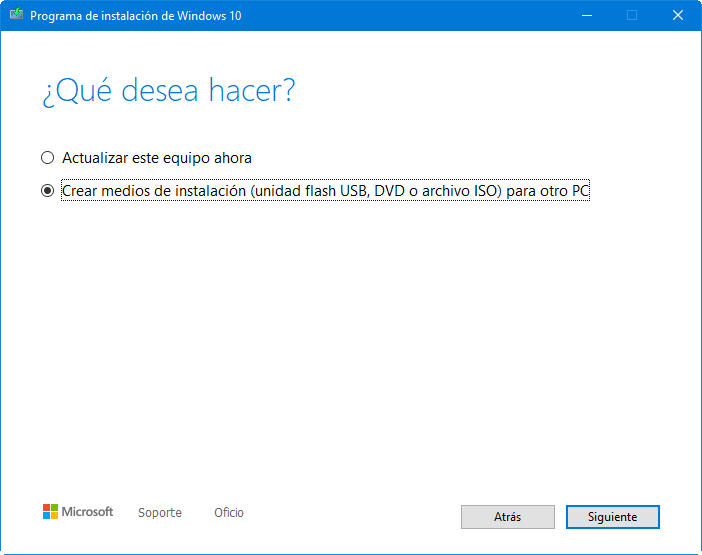 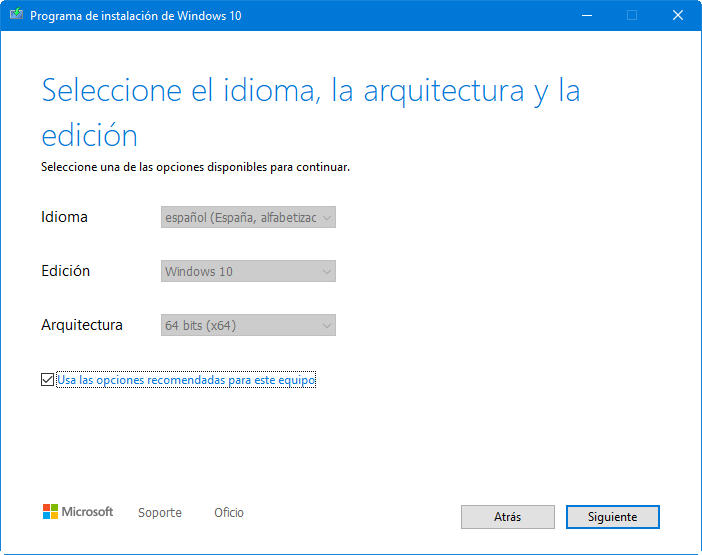 If you select the first option, the same Microsoft tool will create the installation media, requiring a USB with at least 8 Gbytes of capacity.

If you select the ISO image download, you can create the media with your favorite application (for Windows we recommend the infallible Rufus) or load the image directly into a virtual machine.

The launch of Windows 11 with the renewal of various visual sections, along with the advancement of some features released separately in recent months, has deprived us of a version with all the expected new featuresalthough part of it, which had been developed for Windows 10X, is included in this Windows 10 21H2. We review the main ones, some already implemented through monthly quality updates released since 21H1.

One of the big new features of this version is the announcement that from here on out only one Windows 10 update per year will be released. It was expected and is an implicit acknowledgement of Microsoft’s inability to continue with the Â “software as a serviceÂ” development and the two annual releases it implemented at system launch. Â”We will transition to a new Windows 10 release cadence to align with the Windows 11 cadence, targeting annual feature update releasesÂ”, explains vice president for Windows program management, maintenance and delivery, John Cable.

Little to say here. If Microsoft can’t support two annual updates, better just one, but more stable and without the bugs (some very serious) of past updates.

Microsoft continues to leave behind Windows 8 and its goal of covering (with mobile devices in mind) with a single operating system equipment as different as a PC or a smartphone. This resulted in a dual interface to accommodate what came from the “Metro” experience (later Modern UI) that caused an inconsistency still unresolved. Not even Windows 11 is free of it, and as long as Microsoft has to support the gigantic legacy Windows ecosystem, the revolution can’t come. Maybe with Windows 12?

Still, the current version does offer some interesting improvements with a start menu new floating and static mosaic tiles that leave behind the old lives tiles. It has a icon pack a revamped system icon pack that includes a new Segoe font and Fluent Desing design that is gradually being included in all sections of the system.

The Action Center has been redesigned thanks to the work done in Windows 10X; the dark mode has been expanded to more legacy Windows components and the interface revamp has been extended to the system’s tablet mode Revolution? No. Improvements, yes. Will the improvements go unnoticed considering that the biggest changes have been implemented in Windows 11? It depends on the user 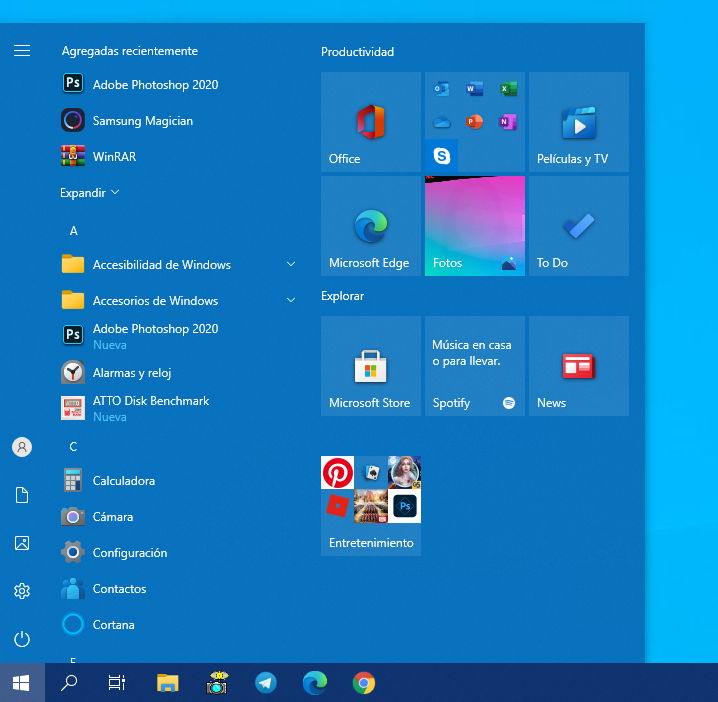 The elimination of the classic Control Panel in favor of the Windows 10 Configuration tool is unstoppable and the migration ofÂ legacy tools to modern versions continues to occur. For example, in Windows 10 21H2, disk management has been ported over with the goal of simplifying the process of managing disks and volumes.

The tool has been rewritten and will allow you to view disk information, create and format volumes, and assign drive letters. It supports better integration with storage spaces and storage settings, and Microsoft promises to keep improving it, but I don’t know about you, I still like the classic control panel better.

To improve the security of Wi-Fi wireless networks, Microsoft has added WPA3 H2E to this release.Â The acronym H2E refers to Â”Hash-to-EelementÂ”, a technology that offers increased protection against side-channel attacks as well as other general security enhancements.

It is the new widget that sits on the taskbar and offers diverse content. It is not new, because Microsoft ended up deploying it as a 21H1 update and is also available enhanced in Windows 11. An updated news window that provides quick and convenient access to a selection of current events; weather or other traffic-related information. 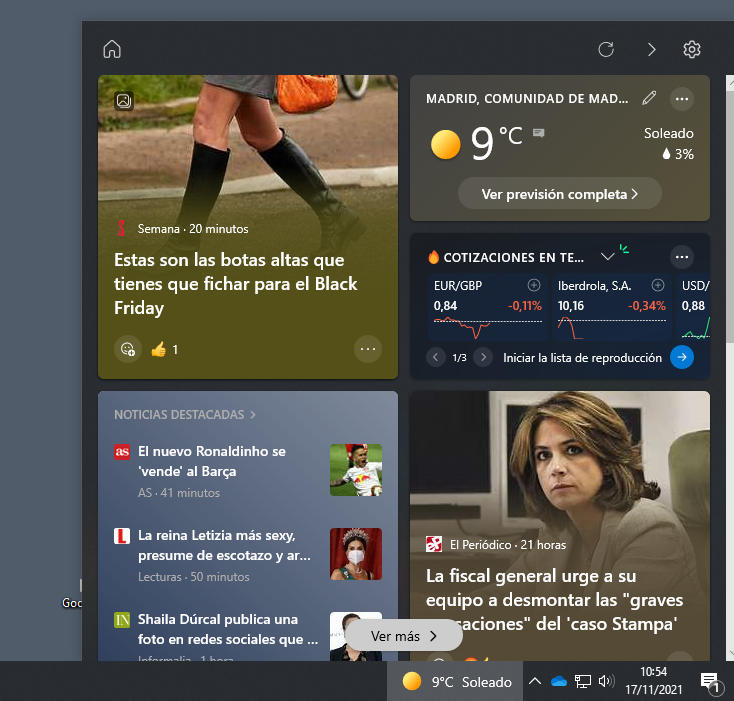 Well integrated in visual terms with a vibrant and colorful design, and customization of the categories that the user wants to receive, it can be minimized, hidden or completely disabled if not interested. As is my case when I’m on my desktop.

The new Microsoft Store created for Windows 11 will be a before and after for the application store of the Redmond giant to be what it should always be: an “open store for an open platform”, with better performance in all sections and ultimately more attractive to developers and users.

The new version of the store has also come to Windows 10. It has been tested in the Insiders versions of Windows 10 21H2, but there is a method for any user to install it now.

This protocol is intended to improve the security and privacy of computers. In practice, it resolves the Domain Name System (DNS) through the secure HTTPS protocol. The feature enhances security against eavesdropping and manipulation of DNS data.

Windows 10 21H2 will have a feature in the Network Configuration Tool that will allow DNS resolution using this encrypted protocol, which in addition to increasing security can also improve performance.

In order to give users more control over GPUs when the computer has two GPUs installed (integrated and dedicated), Windows 10 will use the first by default to save power and the second in tasks that require higher performance. This setting will be applied automatically based on the device type if left unchanged by the user. 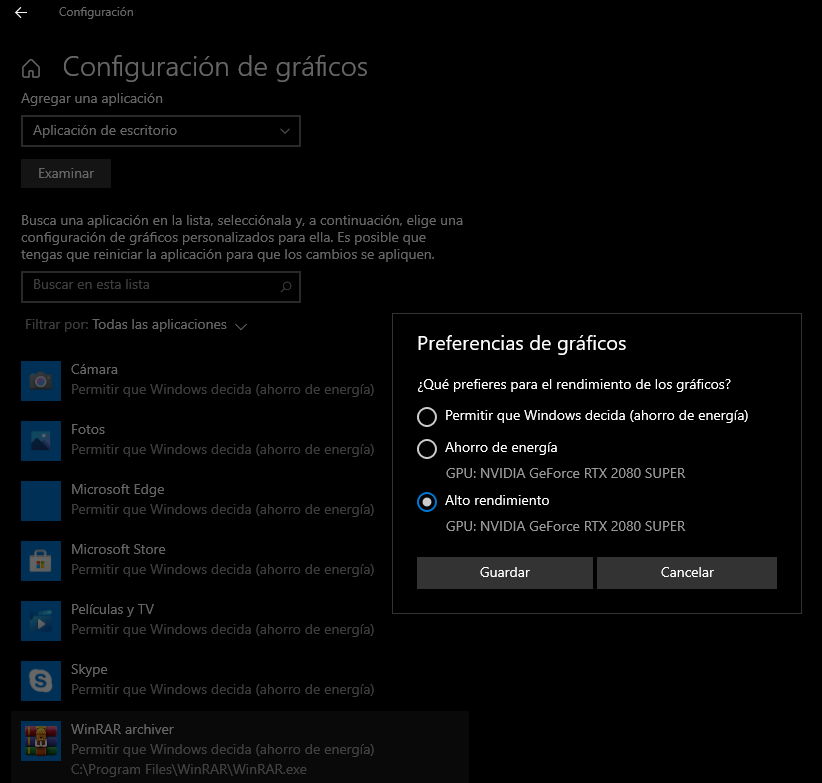 Of course, the user will be able to modify this behavior in Settings > System > Display > Graphics Settings and specify whether an application should use one or the other. We imagine that this internal configuration tool will somehow sync with preferences that can currently handle graphics cards such as the NVIDIA Configurator.

Microsoft has improved the Windows Linux Subsystem especially in Windows 11. Also in Windows 10, now with one of the most requested features by developers. A GPU compute that allows users to use the graphics card to accelerate workloads and use its parallel processing to complete required calculations faster. To use this feature, you will need to have the Hyper-V hypervisor and WSL2 installed, as well as use a DirectX 12 compatible graphics card.

Task ManagerÂ was one of the most improved internal applications at the launch of Windows 10 and has been expanding its functionality with each update of the system. For this version comes a minor new feature and that is that Microsoft has included a new column called âArchitectureâ, which lists whether a running program is a 32-bit or 64-bit process.

It is one of the oldest internal applications of Windows and is still a very useful management tool for professionals or medium-advanced users who want to thoroughly control the operation of your computer or solve some problems arising from its use.

Enhanced version of Windows 10 21H2, although without the great attraction that Panos Panay promised last spring. The bet on Windows 11 and the separate release of some of its functions has relegated its new features In any case, if you stay on Windows 10, its installation is recommended.

The version is delivered free of charge for valid Windows 10 licenses and will receive 18 months support and service for home users and professional users, while enterprise and education versions will get 30 months. And as mentioned above, from now on there will only be one Windows 10 update per year. Microsoft promises to continue to support the system until at least October 14, 2025