The extinction of prehistoric megafauna such as the woolly mammoth, the cave lion and the Woolly rhinoceros At the end of last ice age It has often been attributed to the spread of the first humans around the world. Although overhunting led to the disappearance of some species, a study appeared in the Current biology journal discovered that the extinction of the woolly rhinoceros could have another cause: the Climate change.

When sequencing the Old DNA Of 14 of these megaherbivores, the researchers found that the population of Woolly rhinos it remained stable and diverse until just a few thousand years before disappearing from Siberia, when temperatures likely rose too high for this cold-adapted species.

“It was originally believed that humans appeared in northeastern Siberia fourteen to fifteen thousand years ago when the woolly rhinoceros became extinct. Recently, however, several discoveries have been made of much older sites of human occupation, the most famous of which are around 30,000 years old,” says lead author Love Dalén, Professor of Evolutionary Genetics at the Center for Paleogenetics, a joint initiative of Stockholm University and the Swedish Museum of Natural History. “Therefore, the decline in the woolly rhinoceros towards extinction coincides less with the first human appearance in the area. If anything, we are seeing what looks a bit like an increase in population size during this period.”

To determine the size and stability of the Siberian woolly rhinoceros population, the researchers examined DNA from tissue, bone and hair samples from 14 people. “We sequenced an entire nuclear genome to look back in time and estimate population size, and we also sequenced fourteen mitochondrial genomes to estimate the effective size of the female population, “says co-author Edana Lord, a PhD student at the Center for Paleogenetics. 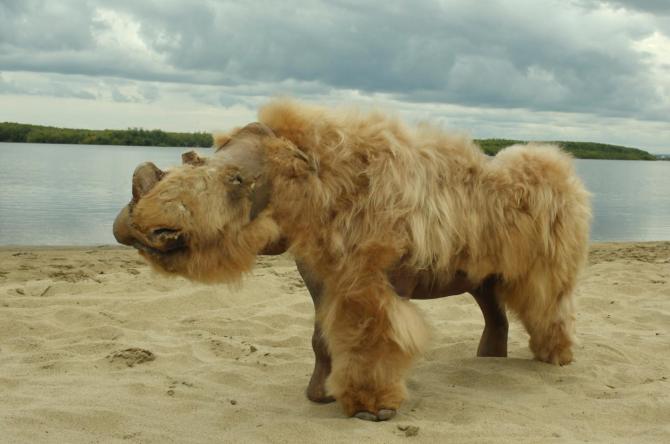 This picture shows the preserved and reconstructed remains of a woolly rhinoceros calf named Sasha that was discovered in Siberia. (Photo: Albert Protopopov)

By observing the Heterozygosity– or genetic diversity – of these genomes, researchers were able to estimate woolly rhino populations for tens of thousands of years before they became extinct. “We study and estimate changes in population size inbreeding“says co-author Nicolas Dussex, a postdoctoral fellow at the Center for Paleogenetics.” We found that after an increase in population size at the beginning of a cold spell about 29,000 years ago, the population size of woolly rhinos remained constant and that at that time the consanguinity was low “.

This stability lasted long after the people of Siberia began to live, as opposed to the declines that would be expected if woolly rhinos were extinct due to hunting. “That’s the interesting thing,” says Lord. “We don’t see a decrease in population after 29,000 years. The data we saw goes back to 18,500 years ago, which is roughly 4,500 years before their extinction. This means they decreased at some point. Interval”.

The DNA data also showed genetic mutations that helped the woolly rhinoceros adapt to cold weather. One of these mutations, a type of receptor in the skin that records warm and cold temperatures, was also found in woolly mammoths. Adjustments like these suggest that the woolly rhinoceros population, which adapted particularly well to the cold climate of northeast Siberia, may have declined due to the heat of a brief warming period known as the oscillation of Bølling-Allerødwhich coincided with their extinction towards the end of the last ice age.

“We’re moving away from the idea that humans take over everything as soon as they arrive in an environment and instead assessing the role of climate in the megafauna extinction,” says Lord. “Although we cannot rule out human involvement, we suggest that the extinction of the woolly rhinoceros is more climate-related.”

The researchers hope to examine the DNA of other woolly rhinos that lived in that crucial 4,500-year interval between the last genome they sequenced and their extinction. “What we want to do now is try to get more rhino genome sequences that are between eighteen and fourteen thousand years old because they have to go back safely at some point,” says Dalén. The researchers are also studying other cold-adapted mega-faunas to see what other effects the hot, unstable climate had. “We know that the climate has changed a lot, but the question is: How badly were different animals affected and what do they have in common?” (Source: NCYT amazement)

The brands most commonly used as bait by cyber criminals

How To Use Quizzes In Your Marketing Strategy

Are there other forms of life in the universe? Why did we never see her?